The Kosciuszko Foundation in NYC: War of the Romantics - A Story in Words and Music 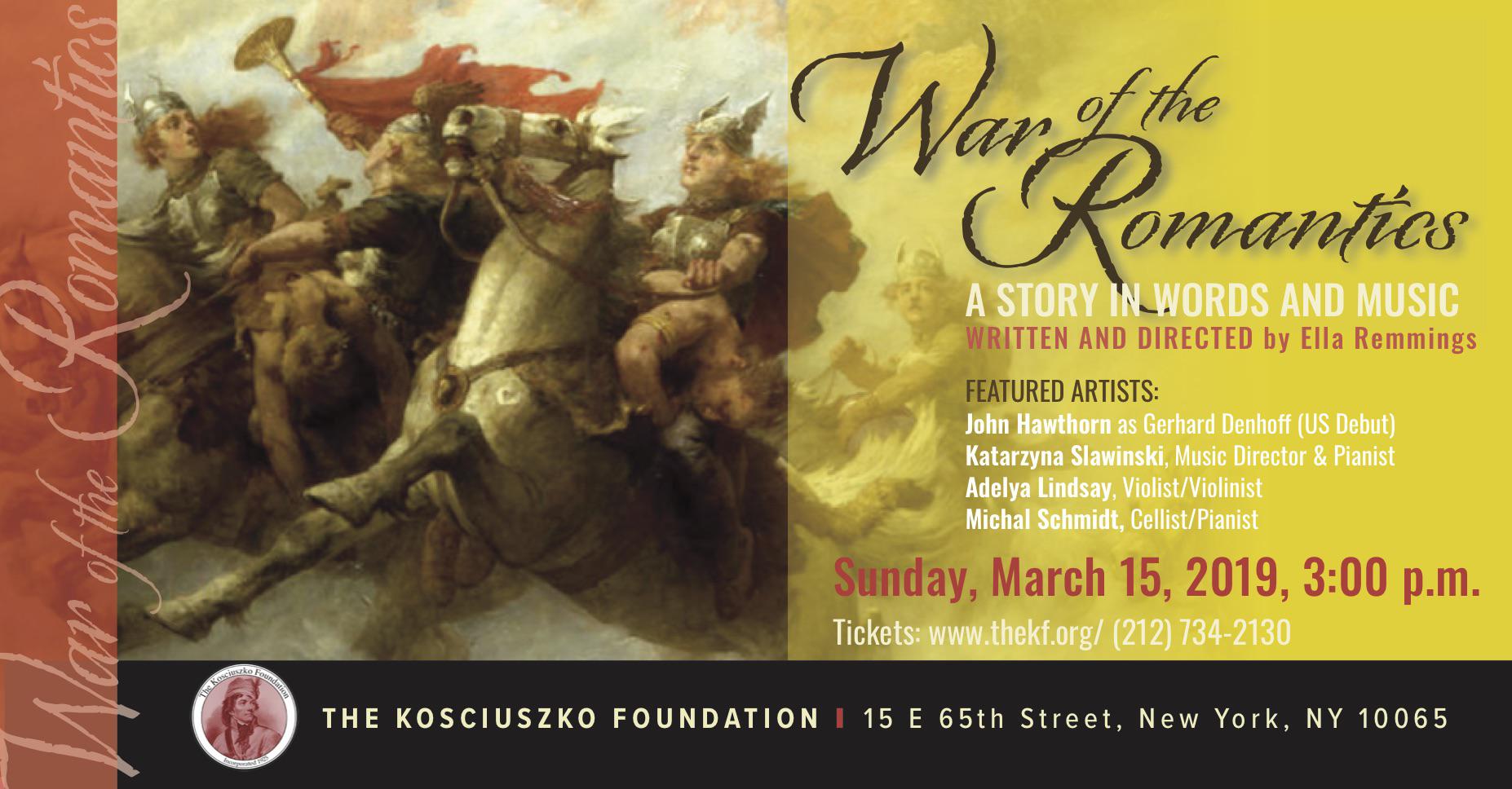 Following its 2019 Philadelphia premiere and sold-out performances, War of the Romantics comes to NYC to tell the story about the most intense creative schism in the history of classical music and how our favorite Romantic composers became entangled in it. Guided by the vibrant, highly entertaining 19th century music critic, Gerhard Denhoff, we get an intimate look at those composers—not only as brilliant musicians, but above all, as people—imperfect, unvarnished, and profoundly human. Through an innovative approach that marries music with theater, the audience is transported directly into the fervency of the times. The performance is richly illustrated with the most beautiful musical selections of the Romantic period. Musical time travel—only better.

War of the Romantics tells the story—in words and music—about the most intense creative schism in the history of classical music. During this period, composers, musicians, and audiences alike took sides in a dispute about the meaning of music—a dispute that grew to surprising intensity, complete with a war of words in the press and highly charged public demonstrations in concert halls—not unlike what occurs in today's politics!

Through an innovative approach that marries music with theater, theaudience is transported directly into the fervency of the times. Guided by the vibrant, highly entertaining 19th century music critic, Gerhard Denhoff, we get an intimate look at our favorite composers—not only as brilliant musicians, but above all, as people—imperfect, unvarnished, and profoundly human. Their music was divine; their lives were anything but. One part history, one part music, one part humor, and—as one would expect from the Romantics—drama. War of the Romantics is richly illustrated with a program of Romantic works that epitomize the intense emotions of the era and of the composers themselves.

By inviting the audience to travel between past and present, reality and imagination—all on a firm foundation of historical facts—War of the Romantics creates an opportunity for a deeper appreciation of music in the context of its era in an intimate salon-style setting. The blurring of the lines between time and space combines what the audience is experiencing now with what the audiences experienced then. Musical time travel—only better.

War of the Romantics was written and directed by Ella Remmings. The cast features an award-winning international ensemble of creative artists, actors and musicians, including two Polish-born artists.

The NYC performance of War of the Romantics has been produced by Image Makers Productions™, 62 Central Avenue, Berwyn, PA 19312. All rights reserved.