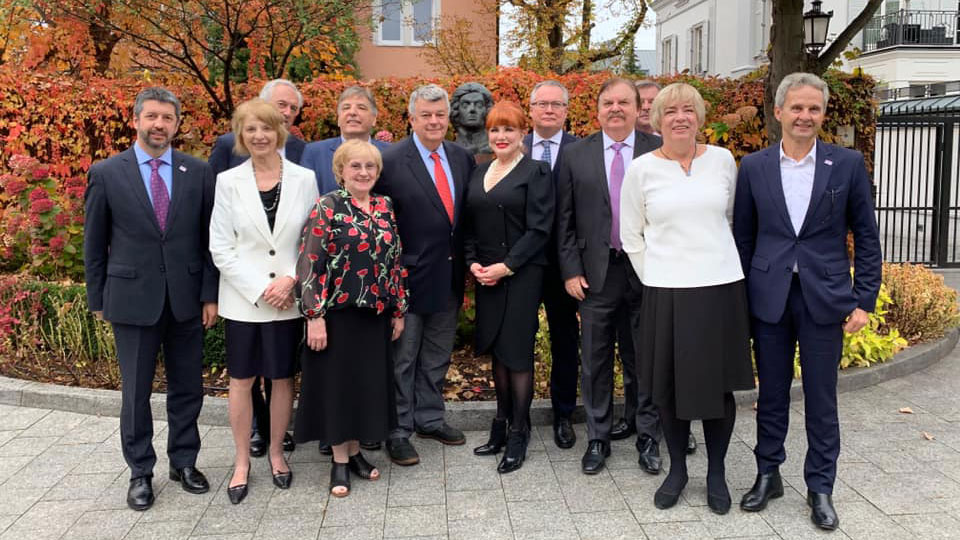 Ambassador Mosbacher with Members of the Board of Trustees of the Kosciuszko Foundation at her residence in Warsaw. Foto: FB

On October 17, Ambassador Georgette Mosbacher hosted at her residence in Warsaw a breakfast in honor of the President and members of the Board of Trustees of the Kosciuszko Foundation visiting Warsaw to hold their annual board meeting.  The meeting was the first occasion for the Ambassador to meet this larger group of trustees who sit on the board of one of America’s oldest and most prestigious Polish diaspora organizations in the United States.   In welcoming the trustees to her residence, Ambassador Mosbacher emphasized the importance of the Kosciuszko Foundation’s programs promoting U.S.-Polish people-to-people ties through exchanges.  Calling Poland “The Silicon Valley of Europe,” the Ambassador expressed hope that exchanges of Polish researchers and scholars in America would continue to help Poland better commercialize its groundbreaking scientific ideas and innovation.  She asked the trustees for their ideas on setting up a venture capital fund in Poland that would help this process, noting that Poland’s further economic growth would greatly benefit from new capital in sectors across the board.  The trustees thanked the Ambassador for helping Poland successful’s nomination into the Visa Waiver Program and said it would greatly enhance people-to-people relations.  They agreed that Poland’s scientific brilliance was ripe for further commercialization and pledged to work with the Embassy on ideas to promote this noble goal.

Founded in 1925 on the eve of the 150th anniversary of Thaddeus Kosciuszko’s enlistment in the cause of America’s revolution, the New York-based Kosciuszko Foundation is dedicated to promoting educational and cultural exchanges between the United States and Poland and to increasing American understanding of Polish culture and history.  It annually funds $500,000 in research scholarship for Polish students and young scientists to pursue their research with academic partners in the United States for periods between 3-9 months.  A similar amount of funding goes to other cultural and educational programs also designed to promote friendship and mutual understanding between the Polish and American peoples. In 2010 the Kosciuszko Foundation opened an office in Warsaw in order to boost the foundation’s activities in Poland.