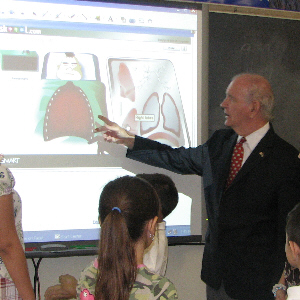 Senator Serphin R. Maltese (Queens) has secured $495,000 in special funding to provide smart boards to every public school in his Senate district - a total of 47 elementary, junior, intermediate and middle schools.

“Smart Boards” are the chalk boards of the future - they are interactive and allow teachers and students to brainstorm, draw, complete math equations, diagram sentences or highlight lessons all right in front of the classroom. They allow students to see the material in a way that a chalkboard could never illustrate.

“In this age of video games, it only makes sense that students will be more interested and open to learning using interactive technology that makes their lessons more fun for them,” said Senator Maltese.  “I am very pleased to be able to provide this technology to our schools that will ensure our students have access to state-of-the-art learning.”

“I believe we should be continually striving to make sure Queens students have the best possible education,” said Senator Maltese.

The schools that will be receiving smart boards include: