Hurricane watch issued for Gulf Coast of US 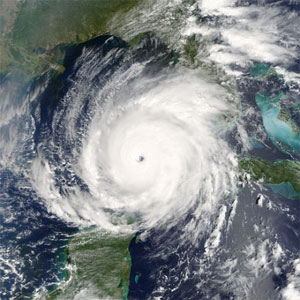 The National Hurricane Center has issued a hurricane watch for Alabama, Mississippi, Louisiana and part of Texas.

The watch area includes New Orleans, where residents marked the third anniversary of Hurricane Katrina's devastation on Friday. The watch stretches from east of High Island, Texas, to the Alabama-Florida border.

Forecasters say Hurricane Gustav is a powerful Atlantic storm taking aim at Louisiana and will likely become a Category 5 with sustained winds of 160 mph or more by Sunday.

A hurricane watch means hurricane conditions are possible within the watch area, generally within 36 hours.

A million people were taking to Gulf Coast highways Saturday, boarding up homes and businesses and fleeing Gustav.

A tropical storm watch was also issued along the Panhandle coast of Florida.

THIS IS A BREAKING NEWS UPDATE. Check back soon for further information. AP's earlier story is below.

Even forecasters at the National Hurricane Center said they were surprised at how quickly Gustav gained strength as it charged toward Cuba. It went from a tropical storm to a Category 4 hurricane in about 24 hours, and was likely to become a Category 5 _ with sustained winds of 160 mph or more _ by Sunday.

"That puts a different light on our evacuations and hopefully that will send a very clear message to the people in the Gulf Coast to really pay attention," said Federal Emergency Management Agency chief David Paulison.

Gustav had already killed more than 80 people in the Caribbean, and if current forecasts hold up, it would make landfall early Tuesday morning along Louisiana's central coast.

That would spare New Orleans from a direct hit, but forecasters warned it was still too soon to say exactly where the storm will go. Residents weren't taking any chances judging by the bumper-to-bumper traffic pouring from the city. Gas stations along interstate highways were running out of fuel, and phone circuits were jammed.

A mandatory evacuation order was expected as early as Saturday night. Hotels closed, and the New Orleans airport prepared to follow suit. Mayor Ray Nagin, saying the danger to the city was growing, told tourists to leave.

As part of the evacuation plan New Orleans developed after Hurricane Katrina, residents who had no other way to get out of the city waited on a line that snaked for more than a mile through the parking lot of the city's Union Passenger Terminal. From there, they were to board motor coaches bound for shelters in north Louisiana.

"I don't like it," said Joseph Jones Jr., 61, who draped a towel over his head to block the blazing sun. "Going someplace you don't know, people you don't know. And then when you come back, is your house going to be OK?"

Jones had been in line for 2 1/2 hours, but he wasn't complaining. During Katrina, he'd been stranded on a highway overpass.

Others led children or pushed strollers with one hand and pulled luggage with the other. Volunteers handed out bottled water, and medics were nearby in case people became sick from the heat.

Unlike Katrina, when thousands took refuge inside the Superdome, there will be no "last resort" shelter, and those who stay behind accept "all responsibility for themselves and their loved ones," said the city's emergency preparedness director, Jerry Sneed.

Yet the presence of 2,000 National Guard troops that were expected to join 1,400 New Orleans police officers patrolling the streets following the evacuation _ along with Gov. Bobby Jindal's request to neighboring states for rescue teams _ suggested officials were expecting stragglers.

Standing outside his restaurant in the city's Faubourg Marigny district, Dale DeBruyne prepared for Gustav the way he did for Katrina _ stubbornly.

DeBruyne, 52, said his house was stocked with storm supplies, including generators.

Others were taking no chances.

Lee Isaacson, 52, a computer consultant, was boarding up windows in his home, which flooded during Katrina. He planned to take his family to North Carolina.

"We're doing this more for looters than the storm," Isaacson said, recalling the chaos that followed Katrina. "I don't think the hurricane will break them, but I don't want someone breaking in."

Many residents said the evacuation was more orderly than Katrina, although a plan to electronically log and track evacuees with a bar code system failed and was aborted to keep the buses moving. Officials said information on evacuees would be taken when they reached their destinations.

Advocates criticized the decision not to establish a shelter, warning that day laborers and the poorest residents will fall through the cracks.

About two dozen Hispanic men gathered under oak trees near Claiborne Avenue, where on better days they would be waiting for work rebuilding from Katrina. They were wary of boarding any bus, even though a city spokesman said no identity papers would be required.

"The problem is," said Pictor Soto, 44, of Peru, "there will be immigration people there and we're all undocumented."

Father west, where Gustav appeared more likely to make landfall, Guard troops were also being sent to Lake Charles. But the state's ports and oil refineries were still operating and had no plans to shut down.

Authorities in Mississippi, also battered by Katrina, had already begun evacuating the mentally ill and aged from facilities along the coast, and East Texas counties were making arrangements to do the same.

National Guard soldiers on Mississippi's coast were going door-to-door to alert thousands of families in FEMA trailers and cottages that they should be prepared to evacuate Sunday.

In Alabama, shelters were opened and 3,000 National Guard personnel assembled to help evacuees from Mississippi and Louisiana.

"If we don't get the wind and rain, we stand ready to help them," Gov. Bob Riley said.

(Â© 2005 Associated Press. All rights reserved. This material may not be published, broadcast, rewritten, or redistributed.)