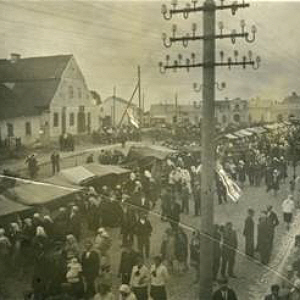 The Borderland Foundation’s work involves an artistic rediscovering of the area's rich multicultural heritage, which had been all but destroyed by two world wars. – Ian Fisher, The New York Times

In just over a decade Mr. Czyzewski has  won an international reputation, helping to set up about a dozen similar centres  as far afield as Mostar in Bosnia, Uzhgorod in Ukraine and Arad in Romania. –  Stefan Wagstyl, The Financial Times

Before multitudes from the Eastern European  borderlands emigrated to the Lower  East Side around 1900, and  before many others perished or were resettled in the hell of WWII, the  little town of Sejny in northeast Poland was home  to Lithuanians, Poles, Jews, Russian Old-believers, Belarusians, Roma, and  Germans. As immigrants, they brought their borderland identity with them to  the multicultural experiment of America.

For a long time people had been emigrating from Sejny.  Today, this little town is exporting to diversified societies worldwide its
pioneering methods of community work as a laboratory for multiculturalism.  The aim of Borderlanders: Finding Their Voice is to
present the ideas and practices of the Sejny-based  Borderland Foundation in building bridges between cultures and  ethnicities. Multiple identity, exile, immigration, and the arts’  creative role in multicultural community work are the themes that relate  the
festival’s events to each other.

All performance events are presented in the Lower East Side as a tribute to the multicultural heritage of a  district that was home to  many Eastern European immigrants in the early  20th century.

CAFÉ EUROPA
An Evening of Arts and Letters on the Theme of  "Borderlanders"
The Bowery Poetry  Club
April 14, 2008

BETWEEN THE PAST AND THE FUTURE:  MEMORY WORK IN THE BORDERLANDS
A Conversation with  Krzysztof Czyzewski, president of the Borderland
Foundation
The New School for  Social Research
April 16, 2008
The Polish Cultural Institute