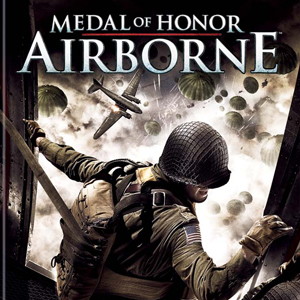 Medal of Honor Airborne is a great follow-up of the series.

It seems you can't read a preview or review of a World War II-based FPS without hearing about how many games there are in the genre. In recent years, the genre has become oversaturated with titles, from quality ones like Call of Duty to gimmicky, mediocre games. Starting out as an impressive series with its first installment, Allied Assault, the Medal of Honor series has fallen in quality over the years. With the last great installment, Pacific Assault, many fans of the series have started to wonder if we would ever see a good MoH title which brings something new to the table. Well, EA has tried to do so with the latest installment, Airborne.

The story's nothing new, as one would expect from a historically-based World-War II shooter. At the start of every mission, you are introduced to the game's main new, innovative mechanic. As a member of the Airborne division, you parachute out of a plane. While falling, you are given a wide variety of areas to choose to land, allowing you to tackle objectives in your order of choosing. This aspect is kind of disappointing in that every map includes invisible walls preventing your advancement and most areas are crawling with enemy troops that mow you down the second you land.

The game features six missions for a total of eight hours of gameplay. Objectives range from blowing up AA guns to clearing buildings of enemy soldiers, to taking out tanks, all of the standard World War II tasks. The few first levels are heavily linear and nothing special for the genre, its only until the fourth level that the game picks up and starts offering you greater freedom, though not quite the amount you see in games like Crysis and STALKER. AI is average, but they do adapt well to the situation, taking into account where you and your comrades land on the map and adjusting their position accordingly. Weapons become upgradeable as you use them more and better.

Airborne does have several problems, such as horrible hit detection, some pretty bad Allied AI, and cases of clipping out of the level; making several annoying replays of a level sometimes neccessary to complete it.

Surprisingly, Airborne has a decent multiplayer component. The game supports matches on half a dozen maps with a few different game types with a player cap of 12. The action's always fast-paced and for us, at least, lag-free. This component of the game is one which truly shows the range of possibility and opportunity available when parachuting, allowing American players to get the drop on Axis snipers and generally makes the battlefield a relatively uncertain place.

An average showcase for Unreal Engine 3, the game has decent environments and excellent character models, but falls flat with explosions and particle effects. There are several types of Axis enemies, and they are all graphically distinct. The game inherits excellent weapons sounds and the MOH theme from previous games.

If you're tired of World War II games, stay clear of Airborne, but if you're willing to give Medal of Honor one more chance, pick this up or rent it.

Final Score: 8.4 - The best Medal of Honor game since Pacific Assault, it actually tries to introduce innovation to the genre.