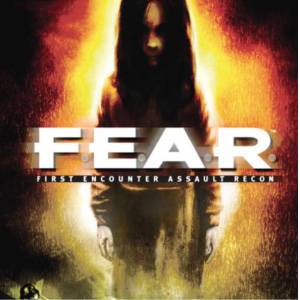 F.E.A.R.'s fusion of horror and hardcore shooting action make it an instant classic and easily recommendable.

FEAR is something of an oddball, a fusion of the hardcore FPS and the hardcore horror genre, does this game succeed with either? In terms of gameplay and scary moments, this is what Doom 3 should have been...

After an extremely cinematic and grisly opening cutscene, you are put into the shoes of a FEAR operative, an organization which investigates and battles paranormal activities in cooperation with the United States Delta Force. You sent into an abandoned industrial sector and soon start to uncover clues as to the strange happenings in the area. Clone soldiers created by Armacham corporation have gone rouge and fallen under the command of a telepathic commander named Paxton Fettel. However, almost as soon as you hit the ground, your fellow Delta operatives are shredded by paranormal forces and you're left to accomplish your objectives alone with the remote help of other FEAR operatives. What follows is a lonely trek through several sections of a large city as you try to capture Fettel and find out what else is going on in that place. From time to time, you encounter random, startling events which become more and more revealing and eventually introduce you to the true antagonist of the game, Alma.

After a disconcerting first level, you soon encounter your first patrol of clone soldiers. If this is where you think you're going to deal with these guys just as you have dealt with enemies in other FPSs, you're wrong.

These guys are different, they're much smarter than other enemies in the genre. Using the crowded environments which are extremely common in FEAR, the soldiers actively patrol their assigned areas and notice if something is out of place, such as if a window breaks or one of their own suddenly disappears. When they do discover you, be prepared for a real fight. They use a huge variety of tactics, from flanking to throwing grenades to flush you out. If they lose sight of you, they'll sometimes send one guy as a scapegoat into an area where you were last sighted, while they attempt to set up firing positions and find another way to you. If they are losing, they call for help and for reinforcements. When there's one left, he retreats, firing blindly down the corridor behind him. It truly feels as if you're fighting well-trained soldiers.

Because of this amazing AI, the game would normally be insanely difficult. However, you have access to an extremely cool slow-mo power. Apparently, your character has really fast reflexes, the reason he was put on the team in the first place. This slow-mo can be activated anytime during combat and allows you to take on many enemies without as large a risk of getting killed. The death animations and bullet animations in this mode are extremely satisfying, as enemies flip over end over end, spilling blood on the floor, or get several limbs amputated as they wander into the visible shockwave of a grenade explosion.

The campaign is of surprisingly long length, probably because of the extended tactical encounters you will face with fighting multiple clone soldiers. However, it is mostly engaging and rarely drags the player into monotony, often presenting randomly dispersed images and startling events which satisfactorily advance the story. However, it is obvious by the campaign's end that FEAR is only the first in a series, as it leaves behind many more questions than it answers, following in Half-life's footsteps. Just like that legendary shooter, FEAR leaves you wanting for more, wondering what happens next to your character or what Alma is going to do. FEAR's only real problem would probably be its lack of varied environments, most of the game taking place in indoor areas such as offices and sewers. However, the designers do make a valiant effort near the end to spice things up.

It's easy to overlook the multiplayer component in FEAR while playing the stellar campaign, and it definitely isn't bad. It's also currently free. The game has some varied maps and offers players a modest variety of gametypes, including some slow-mo variations of classics such as deathmatch and capture the flag. It is a very-fast paced mode, and might leave fans of more tactical games such as Battlefield or Halo with a bitter taste. However, it is filled with the same visceral gunplay and death physics found in the campaign, making it extremely satisfying.

In terms of presentation, Monolith did little wrong. The game's sound is highly immersive, defining every single movement or action in the game's environment. The creepy music leaves you in constant fear of turning the next corner, wondering what else you might find. The graphics aren't in the same ballpark as the sound, but they are still great and suffice to bring out a sufficiently scary and cool experience. Lighting is most impressive, with Monolith's designers using shadows often to scare the player. Textures are decidedly low-res, but since the game is quite dark, it's very hard to notice.

Overall, FEAR is a must play game for those who love shooters, are fans of good horror, and don't squeal at a little blood.

Final Score: 9.4 - FEAR shows how a horror FPS should be done, with immersive atmosphere and pulse-pounding combat.