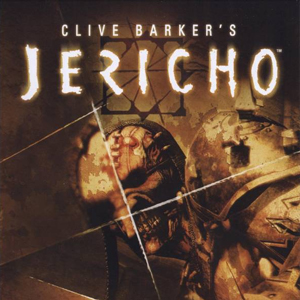 Jericho is a linear shooter hardly worthy of the Clive Barker name...

Many know Clive Barker for his over-the-top horror novels filled with violence and gothic-like dread. The games based off his works have been decent but not anything spectacular. Jericho follows that trend.

Jericho covers the story of a special ops squad who are in search of a mythic being called the firstborn. Apparently, before God created Adam and Eve, his first attempt was the firstborn. It seems that there were several, rather large problems with this being and he ended up being locked up in an alternate reality. Every few milllennia or so, the firstborn attempts to escape. This is the focus of Jericho, the elite special ops unit built specifically to protect the world from the firstborn's return. While the plot does end up visiting some interesting locales and time periods, it is really one dimensional. The game ends in a cliffhanger which frustrates, as do most cliffhangers nowadays.

The atmosphere provided by the game is quite immersive, providing a sense of doom. The eras, including World War II and Sumeria, are converted into areas permeating a horrific atmosphere. The architecture is brooding and imposing, shadowed corners look like they could harbor something truly sinister, and soft ambient lighting brings it all together to make for a cohesive look. The sound design is done pretty well, with a light soundtrack and small sound effects such as water droplets rounding out the brooding atmosphere.

Playing as Ross, the squad leader who gets killed in the first few minutes of the game, you're introduced to one of the game's interesting gameplay mechanics. Somehow, your spirit survives and continues to accompany your squad. This allows you to quickly "switch" to other team members. This is important since each one of your characters has different characteristics, weapons, and special abilities that can be used in different circumstances. Some individual powers include the ability to slow down time, to set foes on fire, or to paralyze enemies with a "cloud" of blood.

You'll start to get irritated as you're introduced to larger and larger combat situations. Your squad has a tendency to die, very quickly. While you might have some simple squad commands such as fall back, stay behind and move to a specific location; they don't help much when the squadmembers are too dimwitted to fight effectively. Most may attribute this to the level design, since it seems like the AI would perform better in more wide-open circumstances, as it often takes cover and supports other members. This is useless with the majority of levels, as they're designed as narrow, constricting corridors where the AI can't effectively use these actions.

The enemies are another part of Jericho that just don't live up to the hype. While most are typical shooter fare with standard AI designed to overwhelm players with speed and numbers, Jericho incorporates several enemies which are simply annoying in their execution. One type of enemy, which explodes upon death, particularly comes to mind. Given the game's tiny levels and your squad's tendency to die, it really is irritating to see one of these lumber up to your position and take out your entire squad in one blast.

But Jericho is not all bad. Oh, no, there are several moments where Jericho's untapped potential shines through. Several scenes, mostly taking place during boss fights or in arenas, are filled with some tense shooting action. If Jericho included more of these in its eight-hour campaign, the game would have felt greatly improved.

It's important to note, that while it sports the Clive Barker name, the game is not scary in the literal sense of the word. It is, however, extremely dark and atmospheric. And this atmosphere is what Jericho does best. While the rest of the game is not quite up to snuff, it remains a competent entry into the shooter market.

Gameplay: 7 - Some interesting mechanics with the squad switching. However, AI on both sides is severely lacking and some enemies annoy more than challenge
Presentation: 8 - Some nice atmospheric design choices fill Jericho's world with an authentic sense of dread
Graphics: 7.5 - Decent looking weapons and character models. Great lighting and environments that add up.
Sound: 8.5 - Creepy atmosphere is built up by the extreme attention to detail
Value: 7 - Like most shooters nowadays, Jericho simply doesn't last with its 8 hour campaign and nonexistent multiplayer.