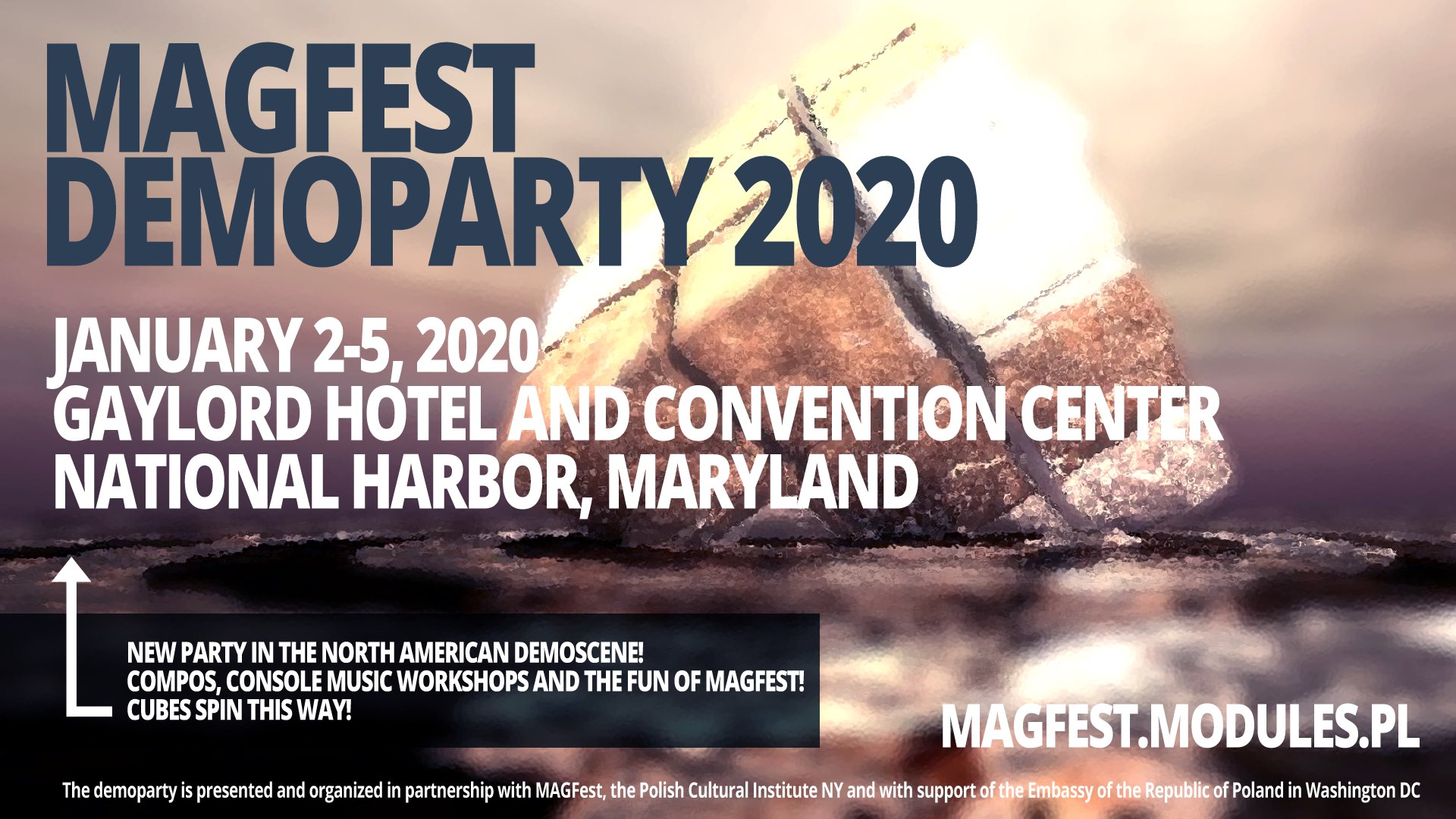 Demoparty presents a digital artform known as the “demo”, and in 2020 a special focus will be on demo music created on old generation consoles! Demoparty program will include: music coding workshops, lectures about Demoscene background, demo showcase, the 24 hr 3-day Demoparty with live broadcast for attending participants and remote guests as well as the final competition with prizegiving. MAGFest visitors will be able to vote live on their favorite demos, interact with creators to learn their techniques, and watch in awe as new codes for music are developed in the making of this magical computer art form. The event is going to be livestreamed during the Super MAGFest Festival.

The Demoscene emerged in the 1980s as an informal movement of digital content creators who produce graphics, music and software. Some would release their work independently, but many joined forces to create non-interactive 2D and 3D presentations along the lines of movie or video game effects. These are called demos and are run on hardware in real time, computed on-the-fly. Demos (as well as their smaller, byte-sized counterparts, “intros”) were once distributed free of charge on pre-internet online systems as well as floppy disks with other software. In the early online era, demosceners wanted a place to meet, since sometimes they had not even met their collaborators. The Demoparty was born.

Demoparties have been running since the early nineties. They quickly became known for debut screenings of new demos and competitions for prizes. Since the European scene is much larger, the MAGFest Demoparty aims to grow the American Demoscene by building links between the gaming and Demoscene communities and introducing newcomers to the scene.

MAGFest Demoparty will be a continuation of a three-year cooperation of Polish Demoscene animators (previously gathered around the Riverwash initiative, now Xenium) with the MAGFest organization, thanks to the continuous support of the Polish Cultural Institute New York and the Embassy of the Republic of Poland in Washington DC.

MAGFest Demoparty will be an opportunity to foster the Demoscene environment in the USA. This movement in America is scarcely active, which is caused by large distances, objective organizational problems and concentration of people involved in the creative use of hardware platforms on consoles that are difficult to program/create music/graphics/animation on, whereas Europe (including Poland) has over 20 years of tradition in organizing meetings and Demoscene competitions, including the last 11 years involved in the largest Polish meeting of this type called Riverwash and the reactivation of Xenium event (September 2019). This collaboration brings Polish and American demosceners together with the MAGFest organizers in creation of a unique experience.