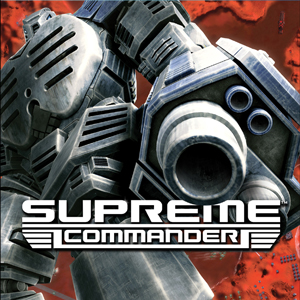 Supreme Commander is a worthy successor to the legendary Total Annihilation...

With its huge battles, gigantic battlefields, and balanced sides, Chris Taylor's Total Annihilation was the pinnacle of RTS games back in 1997. Ten years later, a spiritual successor by the name of Supreme Commander has been released, taking all of what was big about TA and making it even bigger in a glorious new 3D engine.

Supreme Commander's story is set several thousand years into the future, with humanity being split into three factions. The United Earth Federation represents order and empire, the cybernetic Cybran fight for independence, while the alien-enlightened Aeon seek to liberate the universe. The campaign is made up of three subcampaigns, letting you battle from the perspective of each of the factions. Each faction fights for what it believes in, and hence, no side is really "evil." It's a nice touch, because that mentality captures the essence of war. A slight disappointment is that besides for looks, all three sides are nearly identical. This equates to a general lack of personality to each faction, as well as to the game as a whole, which is disappointing because each of the factions has an interesting backstory.

The second you start playing, you'll notice the sheer size of the maps. They range from a mere 5km-by-5km to a gigantic 81km-by-81km. Effectively, this means that its impossible to run into a choke point in Supreme Commander. This encourages using  real-world tactics such as reconaissance and feints. Supreme Commander makes such tasks easy with the ability to queue up commands for most of the units and factories.

SupCom features three "tech levels". The first levels allow you to only build basic units such as light and medium tanks, fighter interceptors, submarines, and bombers. At higher levels, you'll gain access to naval destroyers that can sprout legs and walk on land, siege assault bots, ballistic-missile submarines, and much more.

In Supreme Commander, the two resources to collect are energy and mass. Both are critical to building a strong economy to churn out hundreds of units. While energy can be obtained through various generators and power plants, mass is restricted to a handful of points on the map where you can build mass extractors that mine the planet's core. This leads to some tense territorial battles over mass reminiscent of Company of Heroes.

In the case that two sides are deadlocked in combat and can't beat each other, one can call appon However, that's what experimental units are for. Experimental units are hugely expensive and time consuming to build, but they're potential game changers. For example, there's the Cybran Monkeylord, a gigantic walking tank armed with a devastating laser; the UEF Fatboy, a mobile factory armed with battleship turrets and an energy shield; and the Aeon Galactic Colossus, an enormous bipedal war machine. Building one of these can really change the course of a game easily. With all of these gameplay elements, Supreme Commander is both a blast to play offline and online through GPGNET.

The Supreme Commander engine is impressive, allowing hundreds of detailed units easily move around the battlefield in high detail and with amazing effects. It is a CPU hog, so be prepared to upgrade if you don't have at least a dual-core processor.

Sound effects are great, with all of the different weapons and sounds. However, the music is a bit underwhelming, often the same tunes are repeated throughout the course of a match.

Supreme Commander may not be the most ground-breaking RTS of the year, but it succeeds in what it set out to do... To be a worthy follow-up to the legendary Total Annihilation.

Presentation: 9 - The different sides are well distinguished and the units are unique. Graphics and sound effects really add to the sense of scale.
Graphics: 9.5 - Huge, 81km-by-81km maps are complemented by staggeringly detailed units, but this all comes at a price, especially in terms of CPU power.
Sound: 9 - Great battlefield sound effects and decent voice acting. Curiously, the music is either underwhelming or nonexistent.
Gameplay: 9 - Preserves the large conflicts of TA, encourages players to actually think like battlefield commanders, experimental units are simply game-changing. However, beyond looks, there isn't much of a difference between the sides.
Value: 9 - Long, hard single player missions and a challenging multiplayer component make SupCom a great value amongst its competition.

Final Score: 9.1 - A successful follow-up to Total Annihilation, recommended for fans of the game and of the genre in general.