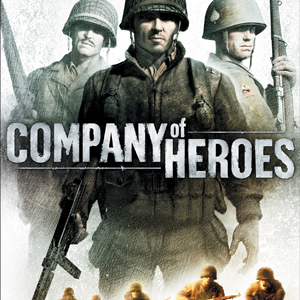 Company of Heroes brings the intensity and conflict of World War II directly to the RTS genre...

The RTS genre has recently started to undergo a renaissance, with titles like World in Conflict, Supreme Commander, Command and Conquer 3 and more offering unique takes on the legendary game genre. A recent upstart in the genre, Relic had already proven its strength with its Warhammer 40K series. Not wanting to rest on its laurels, it did a quick about face and released a World War II RTS with the ability to shake the RTS genre and its gameplay conventions at its roots.
The first thing you will notice about Company of Heroes is its fantastic presentation and large levels of cinematic detail, whether it be in the powerful story-driven campaign or its highly-competitive multiplayer. The units you take control of, whether they be tanks or infantry, are beautifully and meticulously animated. You can see mortar teams going through the individual motions of loading and firing their mortars, infantry squads taking cover behind walls and buildings and reloading as they would in real life, etc. The amount of detail put into the game's presentation is staggering.

Both the multiplayer and the single player rely on the mechanic of capturing and holding three types of supply points: reinforcement, ammunition, and fuel. The more points a player or a team possesses, the faster they gain their respective resources. This virtually eliminates the old RTS tactic of turtling as both sides are forced to constantly be in a state of tug of war over a constantly shifting frontline in order to outsupply and outtech the other team.

The two sides, American and Wehrmacht, are well-balanced against each other. Drawing on historical context, neither side has any overarching "superweapons" as found in other games which allow the controller to completely devastate his opponent. This historical and realistic theme extends to the combat, as ill-equipped infantry squads will never be able to drop the hit points of an armored tank. In order to do that, a player would have to call in AT guns or his own tanks. The vehicle combat in Company of Heroes is also surprisingly tactical, with most vehicles having weak spots in their armor protection, most often at the sides or in the rear. This mechanic leads to some surprisingly tense vehicular battles, as both players try to circle their vehicles around each other in order to be able to pound the weak spots.

The use of infantry is also deeply tactical, infantry can be positioned behind cover in order to survive longer. The catch is that all of Company of Heroes' environments are destructible, meaning an infantry squad can quickly find itself without cover after an enemy decides to call in an artillery strike on their position. This high degree of destructibility introduces a dynamic battlefield, forcing players to constantly adapt to the changing landscape.

As stated before, Company of Heroes simply oozes high production values. This extends to its graphics and sounds. The Essence graphical engine behind CoH is one of the best in the business, bringing a level of detail to environments and units which rivals that found in the best FPSs. The battlefield sounds extremely realistic, in all aspects. Relic even incorporated an impressive soundtrack which complements the game's mood well.

Anyway you look at it, Company of Heroes is simply one of the most unique and well-presented takes on the RTS genre released in years. Where other developers might have simply slapped a World War II skin onto an outdated RTS engine with overplayed mechanics, Relic has gone above and beyond the call of duty in order to supply a PC gaming-exclusive experience that everyone is sure to remember.

Presentation: 10 - The campaign is well presented and cinematic. Every aspect of the World War II battlefield has been replicated to the smallest detail in Company of Heroes.
Graphics: 10 - The amount of detail found in Company of Heroes' characters, vehicles, and environments rivals that found in modern FPSs. Enough said.
Sound: 10 - The sheer amount and quality of sound is staggering. The soundtrack is subtle but effective.
Gameplay: 10 - No turtling and constant action are only some of the advantages inherent in CoH's territorial-based resource system. The amount of tactical freedom and options available is unprecedented in the genre. "If you can't shoot through it, blow it up."
Value: 10 - Ranked multiplayer matches, a quality campaign, and the promise of yearly content expansion releases ensures that Company of Heroes is here to stay.