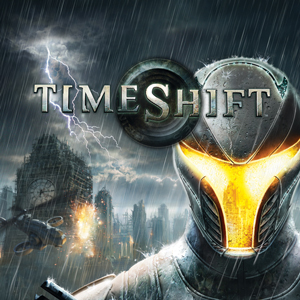 Even Timeshifting doesn't save this game from mediocrity...

Timeshift is somewhat of an oddball in terms of development stories. Usually, developers are pressured by publishers to push games out in time for certain holiday seasons, ignoring some of the potential issues as bugs and level design ommisions. Timeshift's history follows a different path, with Vivendi actually extending Timeshift's development period even after Saber Interactive had stated that they were one or two bugs away from completion. Did the one year of extra development time do anything to help propel Timeshift to the top of the First Person Shooter pile?

Fans of the Timesplitter series might get a sense of deja vu as they encounter Timeshift's slightly derivative story of a mad scientist named Krone using a time-bending suit to travel through time and create his own, oppressive empire. You, a scientist who worked with Krone previously, goes after him in the slightly more advanced Beta suit. What follows is a mind-numbing story of fighting oppressive troops, discovering a rebel movement, and dealing a heavy blow to destabilize the enemy's grip on the population. (read: Half-life 2)

Timeshift's shooter mechanics are disappointingly stale and derivative, with a Halo-like energy shield, three-weapon carry limit, "sticky" grenades (again from Halo), and the "Timeshifting" mechanic. The Beta suit apparently has three main powers, such as time-rewind, time-slow down, and time pause, and on paper, they do seem intriguing. However, Saber Interactive didn't appear to have the right idea in incorporating these powers into the game design. While you can manually choose what powers you want to activate through awkward button combinations, the game actually encourages you to press an "easy" button which chooses the power most appropriate for the situation. While its nice to use in combat, where the player often doesn't have the luxury to make a mistake in choosing his powers, this mechanic seriously ruins Timeshift's few "puzzles." The second you walk up to a puzzle area, the "easy" button practically gives you the solution. It makes these sequences easily forgettable.

Enemies in Timeshift are mostly standard derivations of human enemies found in many FPS games. Standard soldiers fight with assault rifles and display some rudimentary AI routines. There are several other enemy types, such as energy-shield wielding ones which again bring back memories of Halo, specifically its Jackal enemies. Some battle sequences are memorably, though, such as those where you're fighting alongside a squad of rebels or even two where you defend a blimp from wave after wave of enemy air units.

Timeshift's worst problem may be its lack of identity. Before its redesign, the game had a very steampunkish art design and direction. With the new graphical upgrades and extra development time, Saber took the game in a more dark and derivative direction. The streets of the city are dark and damp from the constant rain, while the NPC's in a game have a very muscular and comic look to them. Meanwhile, blimps left over from the previous version of the game zip through the air as the game's main air support units. It's a very confusing and nonfocused art direction which is further compounded by the game's inconsistent graphics. Some of the character models look nice, some don't. Some environmental objects are textured decently, some aren't. It's all a very disappointing presentation and left me with a bad taste in my mouth.

Timeshift, even with its Timeshifting mechanic, is simply not a standout game. From the enemies, to the plot, to the graphics, everything seems to be derived from various other games in the genre. It is a motley collection of parts that aren't meant to fit together, and this ensures that Timeshift will quickly be forgotten, even after all of the extra work put into it.

Gameplay: 8 – Standard shooter fare, with a Timeshifting mechanic which acts more like an easy button to help the player out of frustrating jams.
Presentation: 7 – Feelsing very thrown-together and disconnected, the game simply lacks a clear direction and focus in everything.
Graphics: 7 – Like everything else about the game, the graphics are a mixed bag. Some stuff looks decent, some stuff looks terrible.
Sound: 6.5 – Completely generic weapons sounds and suit computer system. Music is totally forgettable.
Value: 6.5 – A quick 6 hour campaign, with mediocre multiplayer that no one plays says it all...

Final Score: 7.0 - Trying to do too much, Timeshift falls flat on its face and only succeeds in offering the most basic FPS experience.