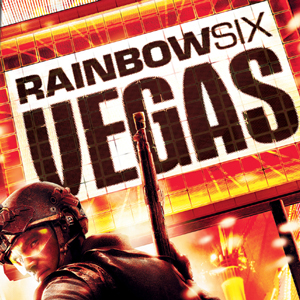 Even though it doesn't offer the ultra-realistic gameplay of previous iterations, Vegas succeeds as a semi-tactical cover-based shooter experience.

Rainbow Six: Vegas is the latest installment of the long-standing tactical shooter series from the collective minds of Tom Clancy and Ubisoft.

This "next-gen" installment takes place mostly in Las Vegas, as the name implies. You're thrown into a fictional story of a terrorist invasion of Las Vegas, and your team, Rainbow, is sent to thwart these border-crossers and figure out their motives and source of their funding. The story isn't much to follow, but takes the gamer to some interesting locales.

Vegas' gameplay is what sets it apart from most other games released this generation. Throughout pretty much all of the campaign, your character is accompanied by a squad consisting of two other Rainbow members. You are inserted into hotspots and given objectives, which are usually concealed behind several series of rooms and environments filled with enemies. You can control your squad through a variety of tactical commands, sending them to take cover, stack behind doors, go into a stealth behavior, etc. This allows you to approach clearing rooms in a much more strategic mindset. For example, you can have your squad stack at a doorway while you climb to the roof of the building, calling in your squad to act as a distraction as you drop down right behind the enemy lines.

In combat, your squad is very vulnerable, encouraging the player to use the game's solid cover mechanic. Even more refined than the system found in Gears of War, you can use pretty much any environmental object as cover and use stop and pop gameplay to
engage the terrorists. Strangely enough, the cover system seems to replace the entire lean mechanic found in previous PC iterations of the franchise. This might piss off some hardcore fans of the series, but the cover system seems to make up for it. Also new to the series is rechargeable health, as found in all other shooters of this day and age. Some might argue that this takes away a lot of the intensity and trial and error that used to make Rainbow Six what it was, but the developers only seemed to incorporate it to reduce the number of annoying deaths and reloads. You can still die in a couple of hits, especially on realistic mode.

Multiplayer is where the game really shines, taking all of the gameplay elements found in the campaign and pasting them right into the competitive experience. You can either play against other players in several team-based gametypes, or take part in an AI Terrorist Hunt, which pits the humans on a server against a predetermined amount of terrorists. All three versions of the game offer a co-op mode allowing you take up to three friends through the campaign's levels. The multiplayer offers an unusual number of customization options, letting you choose your character's look, weapons, gear, armor, grenades, etc. The multiplayer is thankfully a unique experience, and should be considered by those who aren't too enthralled with sci-fi or fast-paced shooters.

R6V uses Unreal Engine 3 and certainly looks great. However, it seems to lack the amount of polish that games such as Gears of War, Bioshock, or Unreal Tournament 3 possess. The most glaring problems are the low-resolution textures on some environmental objects, looking oddly out of place in the game's otherwise stunning visuals.

Even though Rainbow Six: Vegas is somewhat of a departure for the series, it is a successful one. It might do away with the ultra-realism of previous installments, but it doesn't completely drop the tactical shooter identity. The campaign is engaging with its multiple methods of approaching occupied areas, and the multiplayer is very well-built. Vegas is a must-buy for military and tactical-gameplay buffs.

Gameplay: 9 – While the gameplay is more forgiving than previous installments, Vegas' remains a tactical shooter. The cover system is well-implemented and the freedom to approach different areas in different ways is a fresh experience.
Presentation: 9 – Authentic weapons sounds and well-reproduced Vegas casino maps round out the package.
Graphics: 9 – Unreal Engine 3 is combined with some realistic Vegas art for some great looking visuals. Some environmental objects look badly-textured.
Sound: 9 – Weapons sounds are authentic and deafening, team members do an adequate job in terms of voice acting.
Value: 9 – The campaign can be played co-operatively and the game offers a unique multiplayer mode.

Final Score: 9.0 - Rainbow Six Vegas is a solid entry in the series, and will satisfy gamers who have preference for more realistic and tactical combat.