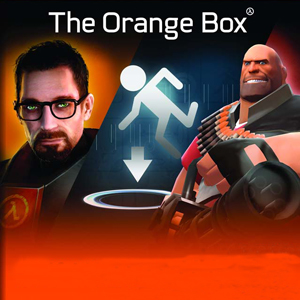 The Orange Box is simply one of the best, if not the best, bargains in video game history...

Valve is a legendary developer, responsible for the ground-breaking Half-life series and several other games. Their previous full game, Half-life 2, won more than thirty game of the year awards and has been globally recognized for its advances in story-telling, action, physics, and character animation. Since then, they've been pumping out episodic content, furthering the story of Gordon Freeman's struggle against the menace, the Combine. Their latest installment, Half-life 2 Episode 2, comes packaged in the Orange Box, a collection of five of the greatest games released in the past few years.

Half-life 2 and its subsequent episodes are all single-player FPSs. They continue the Half-life saga, and have the player view the world through the eyes of protagonist Gordon Freeman. He is initially dropped into the middle of a train station, and the player goes through a feeling of gradual discovery and understanding as he witnesses City 17, its human inhabitants under the constant watch of the Combine, an alien alliance which crushed Earth in the Seven Hour War. Like all oppressive regimes, a hidden resistance movement exists. Gordon is quickly thrown back into the fight for humanity's freedom and survival. Along the way, he meets some well-developed characters and fights varied Combine forces and transplanted alien wild-life. Half-life 2 is more of a thinking man's shooter, relying less on intense violence, and more on appealing story-telling and problem-solving gameplay. The entire game is told through the eyes of Gordan, meaning that you don't know anymore than the character you're playing does. It's a very simple, yet refreshing take on story-telling in shooters. Half-life 2 is a classic, and I highly recommend it to FPS players who haven't had a chance to play it.

The Episodes which the Orange Box contains continue the story right where Half-life 2 drops off. You fight your way out of the slowly-collapsing Citadel along with your partner, Alyx Vance, to escape the city before it explodes. You help out escaping rebel forces and slowly increase the distance between yourself and the Citadel. The gameplay is standard Half-life 2 fare, meaning you get to carry a wide variety of weapons along with the Gravity Gun, which allows you to manipulate and use the many physicalized objects found throughout Half-life 2's world in combat and problem-solving. Your partner, Alyx Vance, is a competent companion, actually helping you out in combat and voicing hints whenever you get stuck with a puzzle. She's more realistic than pretty much any other video game character, and you'll find yourself caring about what happens to her and the rest of your friends.

Episode 2 is the first real new game that Valve included in the Orange Box. It details Gordon and Alyx's journey towards the rebel White Forest base in an attempt to warn them and provide the scientists there with crucial information to defending Earth against another impending massive Combine invasion. The game design is much less linear than previous entries in the series, as the environments usually take place in the forest and large industrial complexes overrun with zombies and headcrabs. You fight your way through grand environments, soon obtaining a modified sports car which proves just as useful to you as any of your weapons or companions. The story-telling and action in Episode 2 is noticeably tighter and better presented than in Episode 1 or even the classic Half-life 2. It is shorter than the original game, but that's well-explained by the episodic focus that Valve has put on the series. It really is a quality game, and the concluding battle is one of the best I've seen in the past few years. There are moments which will make you angry and relieved, and one which can shock even the most diehard of Half-life fans. Episode 2 proves that the Half-life series is one of the best and well-presented in all of video game history.

But wait, that's not all! There's also a little game called Portal. You find yourself in the middle of a test course in a top secret scientific facility in possession of one of the most innovative "weapons" seen in a video game since Valve's own Gravity gun. The Portal gun allows the player to create two portals in walls and ceilings that enable him to travel from place to place instantly. This opens up the possibility for some innovative mind-bending puzzles as original as those initially seen in Tetris, released so many years ago. The rooms get progressively harder and harder, encouraging the player to use momentum and the Source engine's trademark physics to progress. In typical Valve fashion, you only see what your character sees and as a result are quite confused and isolated when the game starts off. Your character is constantly advised and talked to by a strange AI named GLADOs, who is in charge of the facility and the tests. Her attitude is hilarious, making jokes and references which can persuade even the most serious gamers to crack a smile. Portal is short, but the gameplay and puzzle opportunities it offers more than make up for the length.

Rounding out the entire package is Team Fortress 2, the sequel to the legendary multiplayer mod. The gameplay is team-based class action, and its all packaged in this nice stylized presentation reminiscent of Pixar's Incredibles. Each of the classes, Medic, Soldier, Heavy Weapons Guy, etc, is extremely well balanced, allowing some classes to play off one another's strengths for maximum flexibility on the battlefield. For example, a Medic can "link" himself to a Heavy Weapons guy, making him an invincible juggernaut. Soldiers are designed to rocket-jump to high places, and the Spy has some hilarious tricks for concealing himself and assassinating opponents. There are only a few maps, but they are as balanced as those in any other quality shooter. Also, on the PC, the mod community has already released a plethora of custom maps, insuring that this game will stay on your hard drive for years to come.

All five games use an enhanced version of the Source engine, and while it doesn't have all the fancy features that games like Crysis or Unreal Tournament 3 do, it runs extremely well and can scale down to five-year old systems, meaning nearly everybody can play.

Across versions, it is obvious that the PC version is superior, as Valve has and will be a primarily PC developer. Content and graphics-wise, the 360 version is similar but suffers in that it can't take advantage of all the quality mods and custom-made maps that PC users can access for free. The PS3 version is slightly less-polished than the rest, with some frame-rate issues and graphics problems, but manages to remain as one of the best games on that platform.

The Orange Box's value is unprecedented in video gaming history, offering five quality games oozing with innovation and quality presentation. Valve has outdone itself again with a package like none other released this year.

Gameplay: 10 – The Half-life games preserve the legendary gameplay and gravity gun the series is famous for. Portal offers some of the most mind-bending puzzles since Tetris. Team Fortress 2 brings forth one of the most-balanced and hilarious multiplayer games ever seen
Presentation: 10 – From the detailed, foreboding environments and eerily realistic characters in Half-life 2 to the Pixar-like style of Team Fortress 2, the Orange Box earns top marks for presentation.
Graphics: 10 – While more simplistic than some newer engines, the Source engine powering all of OB's games has been sufficiently upgraded to communicate the vision and atmosphere of all five of Valve's games. Team Fortress 2's art style is fresh and pleasing to look at.
Sound: 10 – Voice-acting and environmental sounds are top-notch in the Half-life 2 games, GLADOs offers one of the best performances to date for a video-game AI character, and Team Fortress 2 is filled with outrageous weapons sounds and notification alerts.
Value: 10 – Combining Half-life 2 with its two successive episodes and Portal, you get nearly 30 hours of top quality shooter and puzzle action. This isn't even considering the amazing multiplayer offered by Team Fortress 2

Final Score: 10 - The Orange Box is the game-collection to get for pretty much any gamer this year.