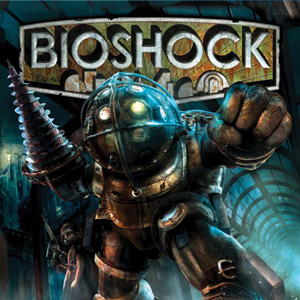 Bioshock is one of the most gripping and immersive single-player FPSs of this decade...

Coming out of the factories, Bioshock had a lot to live up to. Its "spiritual predecessor," System Shock 2, was often hailed as one of the greatest games of all time for its unique combination of FPS shooting action, RPG elements, creepy environments, and story-telling rivaling that of great movies and books. From the get-go, Ken Levine and his studio, 2K Boston/Australia (formerly Irrational Games), have stated that they have drawn on their experiences from making System Shock 2 in order to create their latest title. Does Bioshock live up to the enormous hype and strength of its predecessor?

Unlike the stories of most shooters, Bioshock's narrative is an important part of the package, and as such, it is noticibly stronger than others. With a nod to the Half-life series, the entire plot unfolds through the eyes of your character, building a bond and an understanding of the situation that he is put into. The story starts off in 1960, with your character being subject to a disastrous plane crash in the middle of the Atlantic Ocean. Pulling yourself out of the wreckage, you find yourself near a lighthouse which eventually leads you into a breathtaking submarine ride into the underwater city of Rapture, under the command of its megalomaniacal mayor, Andrew Ryan. It doesn't take long to realize that something had gone horribly wrong, as you emerge into a city filled with crazed, genetically-modified citizens named Splicers, who go around and attack each other for ADAM, the Rapture's "genetic currency." Attempting to escape, your character soon encounters the strength of plasmids as he receives the power to electrocute and manipulate the environment and enemies around him. The story unfolds from there-on-out, and is filled with enough surprises and turns to intrigue even the most hardcore gamers.

There is a lot to talk about Bioshock when mentioning its gameplay. As stated before, your character gains access to a variety of plasmids and "tonics" which allow you to customize him for your specific play-style. From electrocution to manipulation, and from health boosts to hacking improvements, Bioshock simply offers a multitude of choices. That isn't to say that the shooting part of this first person shooter has been neglected, because it hasn't. You get some pretty standard weapons including the usual shotgun, machine gun, etc. However, these too can be upgraded at specific stations hidden throughout the city. The enemies are fun and varied enough to be unique in the genre. For most of the game, you fight the crazed Splicers, who use weapons and enhanced genetic plasmid abilities to try and take you out. There are also a small group of bosses scattered throughout the game, who are really special Splicers with souped-up health and damage abilities. Most intriguing are the Big Daddies, (guardians of enslaved girls called Little Sisters), who go around and protect the Little Sisters as they extract ADAM from the bodies of dead Splicers. As you might imagine, these Little Sisters are quite a tempting target for the city's citizens and yourself, so the Big Daddies are appropriately armed and armored to be a major problem if you annoy them or threaten their assigned Little Sisters. They are extremely tough to take down, and the game encourages you to use your weapons, plasmids, and the environment to take them down. There are many choices, such as freezing a Big Daddy and then chipping away at him with your weapons, luring him into the path of mines, or even hacking the city's security system to send out security bots and attack him. Choice isn't a problem in Bioshock. It also extends into how you deal with the Little Sisters when you finally catch them. Will you harvest them for ADAM, or will you save them from their genetic manipulation and consequently receive a smaller amount of ADAM (but feel better about yourself)? These choices play heavily later on in the game, leading you to two opposing endings which are based on how you treat the Little Sisters throughout the game. It adds an incentive to play the game at least twice, and makes the initial choices hard to make, an aspect that is hard to find in any other game. The environments themselves aren't strictly linear, and there's tons of audio diaries and evidence which helps the player understand what happened in Rapture before he arrived. Halfway through the game, the player is delivered a unique and impressive plot twist which frankly startled me and made me think about Bioshock and how it differed from all of the other games ever made.

However, every masterpiece has its problems, and Bioshock does have them. Thankfully, though, they're extremely small and won't take away from the experience too much. To start off, you basically fight the same five or six kinds of Splicers throughout the entire game. In order to make the enemies a bit more challenging later on, 2K artificially increases the health of the Splicers as Bioshock progresses. Suddenly, enemies which you could previously take down with a pistol shot to the head take much more than that to go down. Also, whenever you "die," you're reborn in one of the city's Vitachambers, with all of your weapons and stats intact, allowing you to go right back into battle against your now-damaged foes. This makes the game much easier than it should be, and while it may encourage experimentation, it certainly removes any tension that you're supposed to feel if faced with a large number of enemies.

The world of Rapture is meticulously designed and expressed. The art style has definite Ayn Rand influences in it, and the music stored on scattered phonographs are actual songs which were popular in the sixties. The presentation in Bioshock is further compounded by the fact that it makes great use of Unreal Engine 3, and as such, is one of the year's best looking games, both in technical detail and outstanding art direction.

On the 360 and the PC, the game looks and plays nearly the same. The 360 controller could feel kind of cumbersome when switching weapons and plasmids or doing a timed hacking puzzle, but 2K has definitely done its best on both platforms. Also, if you have a Vista computer rig with the appropriate DirectX 10 graphics card, you will have an even more satisfying experience with soft particles and 3D water effects.

Bioshock is a one-in-a-million success. It has everything one would want from a single-player experience: intriguing story, stand-out characters and enemies, a certain degree of choice, character customization, unique art direction, great sound, and technically exquisite graphics. Its story is the most gripping part of the package, and won't let you go until you finish with both of the game's opposing endings. Bioshock is a definite candidate for game of the year, and will be remembered for a long time.

Gameplay: 9.5 – Bioshock represents the pinnacle of single player shooters. The gameplay is perfect, besides the artificially enhanced enemies introduced later in the game and the Vitachamber which removes some of the tension that should be inherent in Bioshock's battles.
Presentation: 10 – Bioshock tells its story exquisitely through its story and environments. The world of Rapture is one of the most immersive and unique introduced to gaming.
Graphics: 10 – Combine the bells and whistles of Unreal Engine 3 with Rand-inspired art direction and you get Bioshock.
Sound: 10 – From the authentic music to the goosebump-giving thuds of a Big Daddy approaching, Bioshock's sound is perfect and fits the world it is connected to.
Value: 9.5 – While it doesn't feature a multiplayer mode, Bioshock is so fully featured and well-done that players will want to play through two to three times in order to experience both endings and try out different approaches to customizing their characters.

Final Score: 9.8 - Bioshock is a triumph of the gaming world. Its single player campaign and its various components will surely propel this title into the classics of video game history.