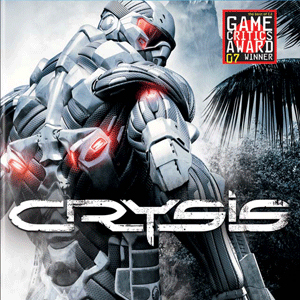 Crysis. A word silently muttered by computer enthusiasts and gamers around the world for the past one and a half years. From the moment that it was shown off at E3 2006, the game became extremely hyped, garnering followers and fans who hoped for it to start off the Next-Generation of PC gaming with jaw-dropping graphics and unprecedented interactivity. Fast-forward to today, November 2007, and Crysis has been finally released. Is it everything gamers have been hoping for?

For those of you familiar with Crytek’s debut effort, Far Cry, you will understand the potential and amazing work Crytek can put into their games. However, Far Cry was just a scratch on the surface of Crytek’s vast store of talent and advanced technology. Crysis takes everything about Far Cry, fixes many of its issues, and ups the intensity ten-fold.

To start off, the game quickly introduces you to the premise of the plot. It is 2020; a team of archeologists have uncovered something incredible on a remote tropical island in the Philippine Sea. However, before they have the chance to further investigate, they are abducted by the North Korean military, (KPA) who soon closes off and quarantines the entire island. You are Nomad, a member of the Delta Force Special Forces unit, which is assigned to rescue the science team and figure out the reason for the KPA’s invasion. As you progress through the story, you battle increasingly larger and better trained KPA forces that stalwartly defend the island and its secrets. However, you soon figure out that there is something else on the island, something which has been recently awakened. Crysis quickly picks up at this point and throws you into a conflict of possibly-interstellar proportions. It is quickly evident that Crysis has a more interesting and superior story to Far Cry, which basically consisted of one man saving a damsel in distress and defeating a madman’s plans for world domination.

On the gameplay front, Crysis does draw on a lot from its predecessor. But, considering that Far Cry was unique in the genre at the time of its release with its nonlinear gameplay and huge, outdoor environments, it’s only a plus. Crysis again starts you off on an expansive tropical island divided into large, several kilometers-wide levels. You are often given mandatory objectives which unfold the expanding conflict and continue the story arc, but the way you achieve these objectives is entirely up to you. The levels are large, and often contain many paths around the map, such as a beach and a cliff, or several paths up a mountain side. Crytek’s philosophy in creating the game was, “Veni, Vidi, Vici,” or “I came, I saw, I conquered,” and it shows. You can choose how you want to engage your enemies, and this is well-supplemented by the highly-touted Nanosuit. Basically, the suit grants you the ability to enhance any of the following; strength, speed, stealth, and armor. These different modes confer various advantages and disadvantages. For example, in strength mode, Nomad is more able to pick up and thrown large objects at high speeds and more able to absorb gun recoil, giving you a steady aim.  Speed mode makes you extremely fast, but vulnerable to enemy fire. Players will eventually learn to pull off different combinations of these powers which can allow them to approach combat situations in even more tactical ways.

In terms of weapons, Crysis doesn’t offer a huge plethora of weapons as you would be able to find in games such as Call of Duty 4. Surprisingly, this is only a plus. Each gun in this game fulfills specific roles and feels completely different. The SMG allows you to easily suppress enemies, the sniper rifle is excellent for taking out enemies only at long distances, the assault rifle is a middling weapon, etc. Added to this is the rail-weapon modification system, which allows you to put on a plethora of attachments on each type of weapon. From scopes to grenade launchers, you can customize your weapons in real-time to tailor your specific play-style. There are also a several kinds of grenades such as frags, flashbangs, and smoke grenades.

All of these innovative gameplay elements would be wasted when coupled with an average shooter’s AI. Thankfully, Crytek has adopted and improved on the great AI from Far Cry. The KPA are smart, and they work together as a team to root out and lure you into the open. Unlike in Far Cry, where the mercenaries could spot and shoot you from a mile away; enemies in Crysis are more realistic, relying on more human-like levels of hearing and vision to detect the player. Battles with the KPA never unfold the same way, due to the dynamic nature of the AI, the large environments, and the tactical freedom available to the player. In the second half of the game, you are introduced to the Alien threat. Unlike most games, where aliens are often depicted as bipedal, average-intelligence creatures (See: Halo, Blacksite, Gears of War) Crytek has adopted a much more radical design approach. The aliens, simultaneously reminiscent of the creatures found in War of the Worlds and the Matrix, are an extremely aggressive threat. They, however, do not cheat and also rely on their senses to root out the player. The huge, alien vs. human conflicts introduced later on are a nice change of pace when compared with the earlier, more personal parts of the game. The game is of above-average length, and should take shooter veterans up to twelve or thirteen hours to finish using the game’s Normal difficulty mode. Crysis offers four difficulty modes, all of which actually make differences in how the game is presented instead of just ramping up the enemy’s health such as in most shooters. For example, Delta difficulty, the game’s most extreme mode, takes away the crosshairs and forces all of the Koreans to speak in their native language. This provides a much more intense and uncertain experience, and is highly recommended for a player’s second play-through. The game ends on a mysterious note, and leaves the player wanting for more, Crytek having stated that Crysis is only the first in a trilogy.

In terms of presentation, Crytek has probably accomplished the most with Crysis. The graphical experience, provided by the new Cryengine 2, is simply breath-taking. From the completely dynamic lighting casting individual shadows from every leaf, to the waves of the ocean breaking across a beach, to the extremely detailed character models and facial expressions, Crysis has become the graphical benchmark across all platforms. From medium settings on up, it is simply the best looking game out, coming even closer to the goal of video-realism. The game looks even better in DirectX 10, adding such effects as sun-rays, 3D ocean waves, and object-based motion blur. The physics system introduced to the game is probably one of the best in the industry, allowing the manipulation of nearly every object in the game world. Crysis touts destructible environments, meaning you can blow apart shacks and houses, and even shoot down procedurally-constructed trees. It all adds to the sense of realism and interactivity.

Crysis also impresses on the sound front. Ambient noise is of particularly great quality, from birds tweeting overhead to the low-frequency rumblings of the large artifact buried in the center of the island. Weapons sound effects are also realistic, changing in frequency and pitch depending on where you are and the distance of enemy fire. It all sounds extremely immersive, especially if you’ve got a surround sound system. Taking feedback on Far Cry, Crytek has thankfully improved upon the terrible and cheesy voice-acting found in their first game. Every character is realistically voiced, and there are no cardboard cutouts or overly-done accents such as those found in most games in the industry these days.  The music is also appropriately epic and mysterious at times that it needs to be. The score was composed and recorded by Inon Zur, and it’s definitely one of his most electrifying and impressive performances to date.

The game also ships with a multiplayer mode, offering two primary gametypes. One is instant action, which is the game’s deathmatch mode. It is entertaining and different from other shooters when you consider that all of the Nanosuit powers introduced in single player are in the multiplayer. The highlight is the mode Power Struggle, which throws two opposing teams into a match resembling a cross between Counter-Strike and Battlefield. The goal of each team is to destroy an enemy’s base with either nuclear or alien weapons of mass destruction. In order to do that, each team has to dynamically capture spawn points and alien crash sites which provide their team with Energy. Factories are also spread around the map which allow players to buy land, water, and air vehicles and unleash hell on the other team. In order to use the energy, a team must capture the Prototype Factory typically found in the center of the map, allowing them to purchase weapons and vehicles capable of dishing out an extreme amount of destruction. The maps are huge and allow the same degree of freedom as the single player campaign does. All in all, multiplayer is a fun and comprehensive addition to a game already possessing a stand-out campaign.

The game also comes with the Sandbox editor, a fully-featured engine editor which allows you to manipulate and even create your own single player AND multiplayer levels from scratch. The mod potential for Crysis and Cryengine 2 is simply astounding, and the current in-development mods such as Obsidian Edge II and Command and Crysis: The Dead 6 are quite promising.

When you take a step back and look at Crysis, you see the makings of a masterpiece. An incredibly diverse and innovative campaign combined with a highly-developed multiplayer mode really show off Crytek’s skill and potential. Amongst other shooters, this one stands head and shoulders above the rest for successfully taking risks in all aspects of gaming, including graphics, sound, and gameplay. In an age where developers continually pump out safe sequels built on previous successes, Crysis is to be commended for simply being better and different. If there’s just one shooter to get this year, it would definitely be Crysis.

Gameplay: 10 – Building on Far Cry’s open environments and more nonlinear gameplay, Crysis ups the ante with the specialized nanosuit, varied weapons, even larger levels, what is probably the smartest shooter AI on the market, and much, much more.
Presentation: 10 – The game offers a story of epic proportions, and does a great job of telling it through first person cutscenes filled with solid voice-acting and “OMG!” events.
Graphics: 10 – This is the most impressive looking game of the entire year, on any platform, bar-none. Using effects such as motion blur, dynamic lighting, high-resolution textures, sun-rays, etc, Crysis is simply the largest graphical leap that games have taken in years towards video-realism.
Sound: 10 – The ambient sound effects add to the sense of actually being on a tropical island. The voice acting rounds out the story and presentation of the rest of the aspects of the game. The music is appropriate and pulse-pounding at all times.
Value: 10 – With its promising Power Struggle multiplayer mode, large and dynamic single-player environments, and easy to use Sandbox editor potentially used to create great mods and levels, Crysis is a game that you’ll be playing for years down the line.

Final Score: 10 – Crysis is 2007's shooter and sandbox masterpiece. It simply raises the bar of what's expected from FPSs from this point forward.