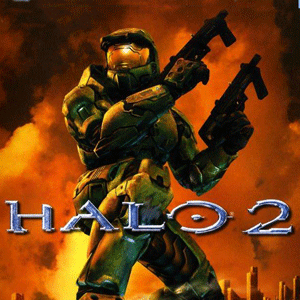 Halo 2 starts off where Halo dropped off, leaving you on Earth right before the eventual Covenant invasion. What follows is a twisted sci-fi plot of betrayals, discoveries, and unexpected new alliances.

Unlike the first Halo, the plot, being told through various cutscenes, is extremely confusing and convoluted, literally taking you across the galaxy and into opposing characters far more times than one can count. The game feels rushed, with an ending that will leave many people pissed and wanting to get Halo 3 (which I wholeheartedly recommend playing if you have a 360 and just skipping this)

The gameplay itself isn't much changed from the original Halo, keeping the old shield system and two-weapon limit. One notable addition is the dual-wielding mechanic, which allows your character to hold two small weapons at the same time. It is fun, and makes you wonder why the first game didn't include it when Bungie's own Marathon series had the mechanic half a decade before. You can still go into vehicles, and there's one or two new alien ones, along with a variant of the famous Warthog.

The enemies remain pretty-much unchanged from the first Halo, adding in new characters such as Brutes (large apes with a major melee attack), Drones (flying bugs) and a few other additions. The new ones don't really add much to the game, and you'll probably have the most fun mowing down Grunts, taking out Elites' shields, and flanking Jackals, all holdovers from the original. The gameplay is uninspired and derivative of the first game, making you wonder if the game was merely reskinned and rearranged from the first one. However, if you're a fan of the first game, there isn't much to hate in terms of the gameplay.

Multiplayer is standard Halo fare, meaning it is quite good, especially when you consider it comes from the consoles. There is a plethora of gametypes, and overall, the gameplay is much less quick and more tactical than other sci fi multiplayer shooters thanks to the shield. However, most weapons are highly inaccurate and fights will often wear down to guys rushing each other weapons blazing, and then hitting each other with over-powerful melees to get rid of each other. The multiplayer is further hurt by its integration with Microsoft's Live network, which is so popular on the Xbox platforms. While you aren't required to pay for a Gold account to play online at all, you will need one to host games or quickmatch, and to gain multiplayer "Achievements" Making PC gamers pay for things they've essentially had for free for years gets a big thumbs down.

Where Halo 2 might disappoint most is with its graphics, sound, and overall presentation. Whether or not the engine is now extremely old, there's no getting around the fact that Halo 2 isn't pretty. Enemies are badly-detailed, energy weapons leave weak-looking blue trails, and grenades fizz out the second they explode. Environments are very low-end and weapons models are blocky. The lighting is completely static. The game can't stack up against Half-life 2, Doom 3, Far Cry and the other beautiful shooters that came out in 2004, let alone newer graphical benchmarks such as Gears of War and Crysis. There are no environments that make you go wow as they did in the first Halo, even though this game technically has the better graphics. Added to this is a strange color selection encompassing the entire game which seems much less eye-pleasing than that in the first one.

The weapon sounds in general lack the oomph that they had in the first Halo, the SMG making an insignificant popping noise, and the plasma rifles sounding as if someone had dialed them down to their lowest settings. Grenades don't shake the screen or the room as they used to, and voice-acting (besides that of the Covenant during cutscenes) is very drab and bored. One saving aspect of the sound is Martin O'Donnell's soundtrack, which maintains the unique Halo feel.

Overall, Halo 2 is a pass-over this year on the PC market. It simply offers nothing new to appeal to pc gamers.

Gameplay: 8 – Halo 2 draws heavily on Halo's gameplay elements, adding ones such as dual-wielding which should have been implemented in the first place. Enemies are similar to the first games, and the additional ones don't offer much more variety.
Presentation: 8 – The game's story is confusing and more convoluted than the one in the first game. Game levels look uninteresting, and cutscenes and voice acting are uninspired.
Graphics: 7 – Running on the aging Halo engine, Halo 2 is technically better than the first Halo, but cannot compare to even older PC shooters. The character models are the worst aspect, showing off bland faces and blocky animations. The color selection of the game is also unappealing. Vehicles and weapons do maintain the distinct Halo artistic look, however.
Sound: 8.5 – The music, expanding on Halo's epic score, is amongst the best in the industry. However, the mediocre weapons sounds and bored voice-acting are not.
Value: 8.5 – While the multiplayer is considered great on the consoles, there are many better multiplayer shooters which offer more options and more longetivity. Halo 2 is further hurt by its campaign, which you'll play through once and forget. Achievements offer some incentive to continue playing, but are easy to obtain.

Final Score: 8.0 - Halo 2 is nothing special, but a solid shooter which could appeal to fans of the series.