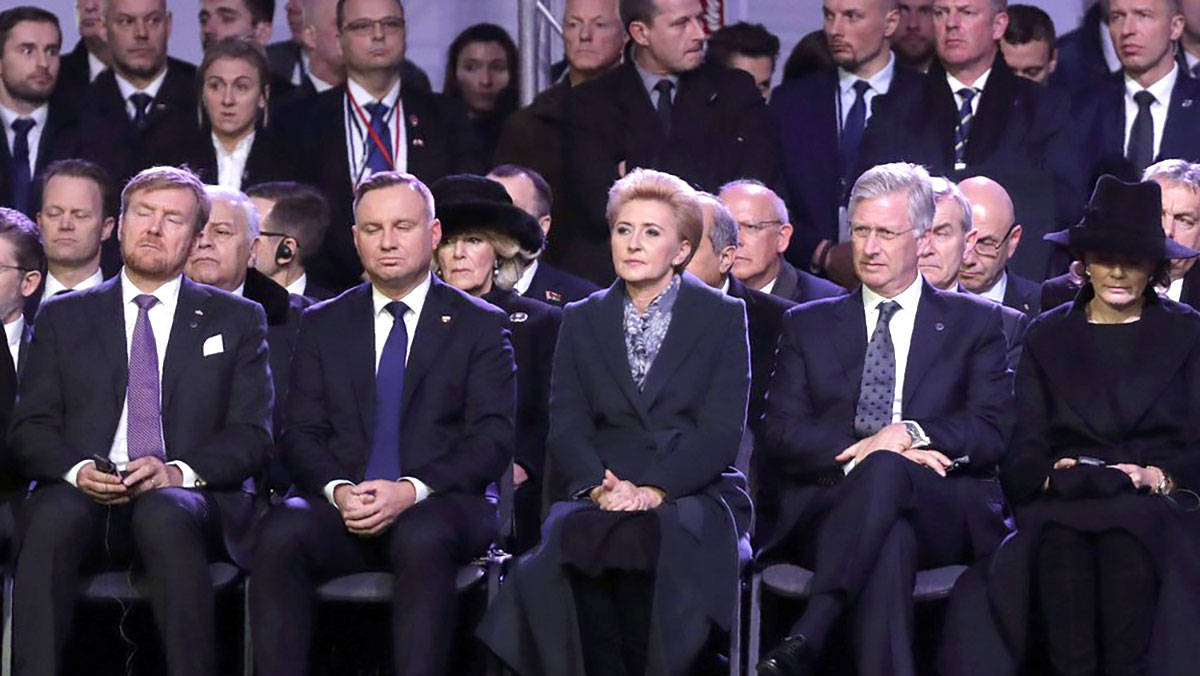 Poland's President Andrzej Duda is joined by First Lady Agata Kornhauser-Duda in ceremonies to celebrate the 75th anniversary of the liberation at the camps Auschwitz-Birkenau near Oświęcim, Poland.

Oświęcim - Survivors of the Auschwitz-Birkenau Nazi death camp in occupied Poland prayed and wept in Solidarity earlier this week. Monday was the 75th anniversary of the liberation of the camps. Auschwitz was liberated by the Soviet army on Jan. 27, 1945.

“We have with us the last living survivors, the last among those who saw the Holocaust with their own eyes,” Polish President Andrzej Duda told those that were in attendance. “The magnitude of the crime perpetrated in this place is terrifying, but we must not look away from it and we must never forget it,” Duda added solemnly.

About 200 camp survivors attended, many of them elderly Jews and non-Jews who have traveled from Israel, the United States, Australia, Peru, Russia, Slovenia and elsewhere. Many lost parents and grandparents in Auschwitz or other Nazi death camps during World War II, but were joined by children, grandchildren and even great-grandchildren.

They gathered under a heated tent straddling the train tracks that had transported people to Birkenau, the part of the vast complex where most of the murdered Jews were killed in gas chambers and then cremated. Ronald Lauder, the president of the World Jewish Congress, brought the crowd to tears with the story of a survivor who was separated from his family: The man watched his young daughter, in a red coat, walk to her death and turning into a small red dot in the distance before disappearing forever. 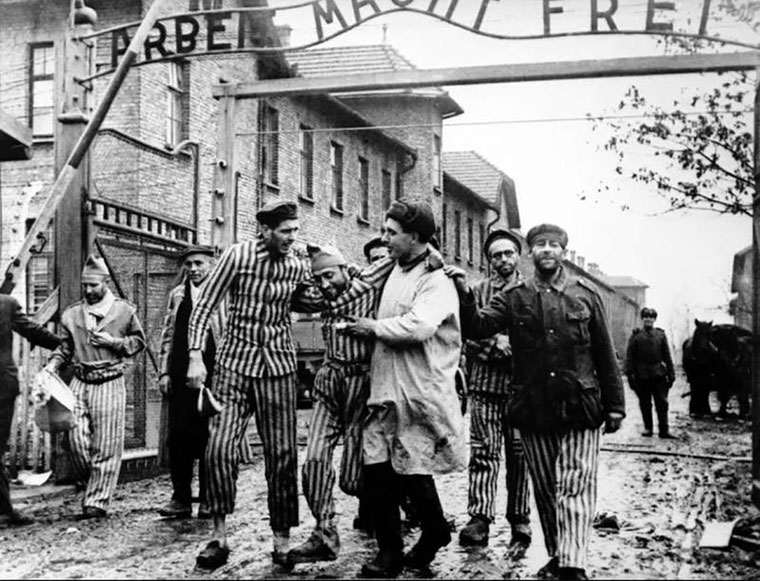 The Soviet soldiers that liberated Auschwitz could not have been prepared for the grotesque things they would find on January 27, 1945, when they entered the German concentration camp and liberated approximately 7,6000 Jewish detainees. This photo shows a doctor from the 322nd Rifle Division of the Red Army helping survivors leave the prison.

Most of the 1.1 million people murdered by the Nazi German forces at the camp were Jews, but other Poles, Russians and Roma (Gypsies) were imprisoned and killed there.

“Distorting the history of World War II, denying the crimes of genocide and negating the Holocaust as well as an instrumental use of the Auschwitz for whatever purposes is tantamount to desecration of the memory of the victims,” Duda said. “Truth about the Holocaust must not die.”

In 1939, Poland was home to more Jews than any other nation in Europe. Partitioned by Nazi Germany and the Soviet Union that year, Poland lost a fifth of its population in World War II. Over 90% of Polish Jews were killed in the Holocaust. Israel was established as a Jewish homeland in 1948, out of the ashes of that global conflagration.

Of the millions of Jews who died during the Holocaust, about one-sixth died at Auschwitz, where crematoriums and gas chambers were used for brutal mass executions.

“It is difficult to be anywhere else on this particular day,” said Piotr Cywiński, director of the Auschwitz-Birkenau Memorial and Museum. “We all want to stand together with Auschwitz survivors living among us.”

Recent CEEC Policy Briefing: Runup to the 2021 NATO Summit Video
PAC: CEEC Policy Briefing: Runup to the 2021 NATO Summit on April 22
G7 Foreign Ministers' Statement on Ukraine
Donations for the Journalist Victims of Belarusian Repressions
Angelika Jarosławska Sapieha was Awarded by Grand Order – the Stefan the Great Cross
Resilience and Russian Interference: Neutralizing the Kremlin’s Campaign to Dismantle Democracy - discussion
The President of Poland: The Truth that Must not Die
The Parliament of The Republic of Poland Against Manipulating and Falsifying History by Russia
My America Summer Work Travel Photo Contest 2019. Winner – Maciej Kuc for photo “Forrest Gump(ers)”
SEE MORE