The President of Poland: The Truth that Must not Die 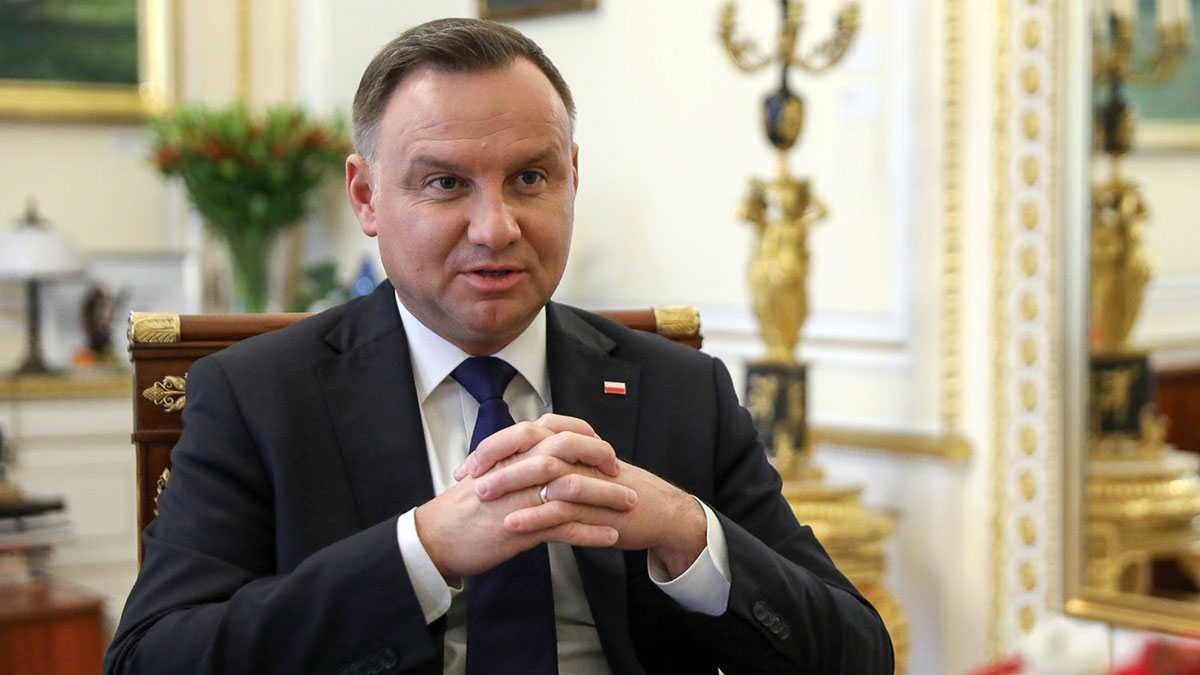 President Duda on the 75th Anniversary of Liberation of the Nazi German Death Camp KL Auschwitz.

On January 27, 1945, Soviet soldiers liberated the German Nazi death camp KL Auschwitz. What they found there continues to sow terror and elicit unequivocal moral condemnation to this day.

Nearly 7,000 prisoners regained their freedom then. Previously, between January 17-21, about 56,000 prisoners were taken out of Auschwitz and its sub-camps, and forced on devastating death marches into the heart of the Third Reich. Those who remained in the camp were but shadows of people, permanently mutilated by unimaginable physical and mental torture. They miraculously survived inhuman living conditions, hunger, frost, illness, slave labor, merciless beating, humiliation and abuse from the henchmen. Some of them were victims of criminal medical experiments. Every day they would watch the death of their fellow sufferers: men, women, the elderly and disabled, and children. They were witnesses to numerous executions - including those carried out by members of the SS for cruel entertainment. Some prisoners were forced to move the bodies of those murdered into gas chambers and to burn them in crematoria, knowing that they would experience exactly the same fate.

This is only a brief description of the hell on earth, represented by the Konzentrationslager Auschwitz as it was, the place where more than one million Jews and thousands of victims of other nationalities were slaughtered, including Poles, Roma, Sinti, and prisoners of war from the Red Army. The same fate was shared by millions of Jews murdered in other German Nazi death camps: Treblinka, Sobibor, Belzec, Kulmhof, Stutthof and dozens of others. The authorities of the Third Reich planned and carried out the total extermination of the Jewish people. That is why they created a network of camps operating as real death factories. Murders were perpetrated there as if in a cycle of industrial activity – by hundreds and thousands, efficiently, bearing in mind the time factor and cost of transport, keeping minute records. There had been no historical precedent for such extreme dehumanization and degradation of millions of innocent victims.

It is hard to put it into words, to read, to talk about it... In the biblical Book of Kohelet we find the following words: For in much wisdom is much vexation, and he who increases knowledge increases sorrow. Nevertheless, the effort must be made. This knowledge must be passed on to new generations even at the price of sorrow it causes. We must forge the future of the world based on a profound understanding of what happened more than 75 years ago in the heart of Europe, and what eyewitnesses continue to relate to us. What befell the nation of descendants of Leibniz, Goethe, Schiller and Bach, when they were infected with the virus of imperial pride and racist contempt - may come as an everlasting warning. We must also not forget that the last, decisive step leading towards World War II, the war without which there would have been no tragedy of the Holocaust, was the secret pact between Hitler and Stalin of August 23, 1939. The agreement meant that Central and Eastern Europe were deprived of its freedom and sovereignty, and the ensuing close cooperation between the two totalitarian regimes lasted until the very last hours before the attack, which Nazi Germany launched on the Soviet Union on June 22, 1941.

The truth about the Holocaust must not die. It must not be distorted or used for any purpose. In the name of sacred memory of the annihilation of the Jews and out of respect for other victims of the 20th century totalitarianism - we cannot, and we shall not condone it. We will not cease in our efforts to make the world remember this crime. So that nothing of the kind would ever happen again.

Very early on, the Polish resistance movement took up the mission of uncovering the truth about the Holocaust and of supporting Jews threatened with extermination. The Polish Underground State, established on our occupied territories, tried to protect all those who until recently were citizens of independent Poland. In September 1940, Witold Pilecki, an officer of the Polish Army, acting in agreement with the underground authorities, deliberately let himself be imprisoned in Auschwitz. He escaped in April 1943, and then produced and passed on a report on what was happening there. A passage from it reads as follows: "Those sick [with typhus], unconscious but also those almost recovered (...) were packed into vans and taken (...) to the gas chambers. (...) One eight-year-old boy asked the SS man to leave him. He knelt before him on the ground. The SS man kicked him in the stomach and threw him into the van like a puppy.” Also, Jan Karski, an emissary of the Polish authorities in exile, watched with his own eyes the horrors occurring in the Warsaw Ghetto and in the German transit camp in Izbica. He prepared a memorandum on German systematic genocide of Jews. Starting from December 1942, he was presenting it to opinion leaders and to top authorities of the Allied Powers. Earlier, General Władysław Sikorski, prime minister of the Polish Government in London, addressed a note to the Allies adopted at the meeting of the Council of Ministers on June 6, 1942. He reported in it: "...the destruction of the Jewish population takes place in unbelievable proportions. In cities such as Vilnius, Lvov, Kolomyia, Stanisławów, Lublin, Rzeszów, Miechów, tens of thousands of Jews are massacred. The Gestapo carries out mass executions in the ghettoes of Warsaw and Cracow every day. (...) Jews in Poland have suffered the most terrible persecution in their history.”

At the same time, the Polish Underground State established the Council to Aid Jews at the Government Delegation for Poland. That allowed nearly 50 thousand people to obtain documents, shelter, money and medical care. Polish diplomats were organizing escapes for Jews to territories not controlled by Nazi Germany. A significant percentage of Holocaust survivors owed their lives to thousands of Polish Righteous Among the Nations. In our family stories, historical and literary documents, the memory about many people of Jewish origin hidden in attics, cellars and barns, is still alive. So are the memories of sharing with Jewish fugitives a modest meal or showing them a safe escape route. And it must be remembered that in Poland, every such gesture was punishable by death at the hands of German occupiers, something that happened hundreds of times. Among millions of Poles there were also people who could have helped Jews in the hiding, but did not because they could not overcome their fear for their own lives and for the lives of the loved ones. There were also those who, acting on a base impulse, handed Jews over to the German occupation authorities or committed disgraceful acts. Under dramatic circumstances of that time, the judiciary of the Polish Underground State would sentence such criminals to death and have them executed.

German Nazi concentration camps built in occupied Poland were and still are an unbearable humiliation for us today. They stand in a stark contrast with our one thousand years’ long culture and history, with the Polish spirit of freedom, tolerance and solidarity. Genocide of Jews, albeit perpetrated almost all across war-time Europe, came as a particularly heavy blow to the Polish state, which was for centuries multinational and multi-confessional. The Jewish community in pre-war Poland was one of the most numerous in Europe. Of the 6 million citizens of the Republic of Poland who died in the wake of World War II (over one-fifth of the total population), as many as 3 million were Polish Jews. And they were the largest group of Holocaust victims. The Jewish community, which lived and prospered on Polish soil for nearly ten centuries, have almost disappeared within a few years’ time. Poland suddenly lost thousands of Jewish artists, researchers, doctors, lawyers and clerks, businessmen, craftsmen, merchants and other valued professionals. Among those murdered were spouses, friends, neighbors and fellow employees. In our cities, memory persists about the martyrdom of Jews forced by the German occupiers into the prison-like ghetto districts. There are but a few pre-war synagogues left serving as houses of prayer today. Yiddish and Hebrew no longer resound in the surviving buildings of Jewish religious schools or in ritual baths. Within Poland's current borders, there are nearly 1,200 identified Jewish cemeteries, but no surviving people to visit the graves there. Jewish works of art and craft, antique books, prints and manuscripts written by scholars, writers and composers were irretrievably destroyed.

The history of Jews in Poland and their annihilated world is now retold through publications and scientific conferences, festivals, exhibitions, concerts and monuments, sponsored by state scientific and cultural institutions such as museums, theatres, archives and libraries. Gradually, Jewish religious communities, community organizations, publishing houses and magazines are being brought back to life. We support these actions, because German Nazism cannot have the final say in the narrative of the Polish Jews and their martyrdom.

Commemoration of the tragedy of the Shoah should be an important and lasting element in education for peace – as a story that sinks deeply into human hearts, bringing down barriers of prejudice, division and hatred. It should be a lesson about how to show understanding and help those who are hardest hit by adversity.

It is in this spirit that we will mark International Holocaust Remembrance Day. By decision of the UN General Assembly, for fifteen years now it has been commemorated on the anniversary of the liberation of Auschwitz. That is why in four days' time, in the State Museum Auschwitz-Birkenau in Poland, where the ashes of more than one million Holocaust Victims are buried, we will meet with leaders and high representatives of countries from all over the world. We shall be accompanied by venerable survivors. On the 75th anniversary of the symbolic end of the extermination, we will bear witness to the truth. Together we will call for peace, justice and respect between nations.

Eternal memory and reverence to Those Executed in KL Auschwitz!

Eternal memory and reverence to the Victims of the Holocaust!

President of the Republic of Poland
Andrzej Duda