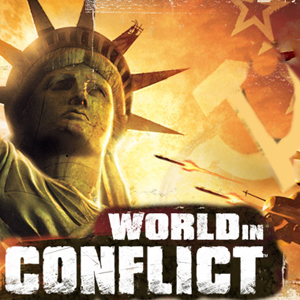 When many people think of RTSs, they think of long, boring stretches of gathering resources and building up bases and then armies. Then they go and rush the enemy, one side usually winning as the result of luck or picking out more appropriate combinations of troops. World in Conflict, Massive Entertainment's newest game, throws resource-gathering out the window and starts you off smack dab in the middle of battle.

The set up for this conflict is the start of a Third World War between Nato/USA and the Soviet Union right at the end of the Cold War. The Soviets decide to go out with a bang in the face of economic collapse, and so starts World in Conflict's campaign.

Now, usually, campaigns in RTSs are looked down upon and skipped because they either don't offer interesting stories and/or are presented very artificially. World in Conflict is a grand exception to this de facto rule. The game's story, written by a crack team of script-writers, offers an overly cinematic view of a war that could have devastated the world only a decade and a half ago. There are three or four main characters which the story mostly follows, and it actually deals with their feelings and emotions regarding the war and develops bonds in between them as the story progresses. Again, we have character development, which is completely unheard of in the RTS genre, and is done better here than most games in ANY other genre. There are tales of bravery, cowardice, and even self-sacrifice cleverly interwoven with the story.

The game's campaign is nicely complemented by its innovative gameplay, which basically gives the player a bunch of "command points" that he can use to buy units of differing categories and strengths. If a unit is lost, those points are quickly added back to the pool, meaning the player can get right back into the fight. The majority of the campaign's missions involve attacking fortified areas, capturing them, and then holding them for a predetermined amount of time until either reinforcements arrive or the enemy retreats. However, there are some clever segue ways, such as using repair vehicles and resupply crews to help reorganize a scattered army in the wake of a large Soviet attack. The campaign is mostly easy, with some challenging points later on in the campaign, but even the least dedicated RTS players will have no trouble getting through it on the Hard difficulty setting. Scattered throughout the missions are secondary objectives, which involve such varied missions as repairing a commander's main command tank to taking out a flanking wave of Soviet helicopters. Achieving these objectives awards the player with medals that offer the campaign some kind of replayability.

While the campaign is great and unprecedented in terms of the RTS genre, its Multiplayer where the game really shines. Each match places a player on two opposing teams, where he must choose one of several roles to play in his side's military forces. This offers some interesting gameplay differences, as Air forces are extremely powerful, but are unable to actually hold and capture territory. Armor can slice through infantry squads quite easily, but cannot defend itself against Air strikes. This type of rock-paper-scissors mechanic requires players to work with each other as a team and use the strengths and reduce the weaknesses of their respective branches. Players are also rewarded tactical aid points that allow them to call in different kinds of aids in increasing magnitudes of destruction, eventually all the way up to a tactical nuke. Many of the multiplayer maps involve the two sides fighting over territory in a limited number of time, and their status is represented by a bar at the top of the screen, further expressing the tug of war gameplay of this game. It is easy to learn the game, but it is very challenging to master, requiring a larger time commitment than most games if you want to become good at it.

When you look at presentation, this game is completely mind-blowing. Based on Massive's next-generation RTS engine, WIC is a beautiful game. From the huge maps to the incredible real-time lighting to the 3D volumetric clouds, the game is arguably the most beautiful of the year, on any platform and in any genre. Cutscenes are mostly done in-game, and have character animations and textures which come close to rivaling even the most modern of first person shooters. Sound is just as ambitious and successful, with the constant sounds of battle punctuated by authentic radio transmissions from troops either succeeding in a flanking attack, or being frantically wiped out by an incoming airstrike. The control interface itself is very slick and gets rid of most of the unnecessary clutter found in other games of the genre.

Stepping back, and looking at the game as a whole, WIC is a masterpiece. When you look at what Massive decided to do with the game, you have to look hard to find any flaws, and there really are none. The game is well designed, beautiful, cinematic, action-packed, and truly offers something new for the genre. It's the game that long-time RTS players will instantly pick up and love, and one that people who avoid the genre will get intrigued with.

Presentation: 10 - Everything from the menus to the various cutscenes is filled with quality story-telling and great design decisions. The slim control interface is easy to learn and master.
Graphics: 10 - World in Conflict offers the best RTS graphics engine out on the market. From god-rays to detailed units, there is hard to find any flaw with the graphics.
Sound: 9.5 - Excellent voice acting and music. The battlefield sounds as genuine as one with soviet-era armies clashing would be.
Gameplay: 10 - The new resource model and point-capturing system of the multiplayer and single-player campaigns brings a fresh change of pace to the market
Value: 9.0 - With robust multiplayer options and medal achievements for the single-player missions, World in Conflict is an RTS that will last
Score: 9.7