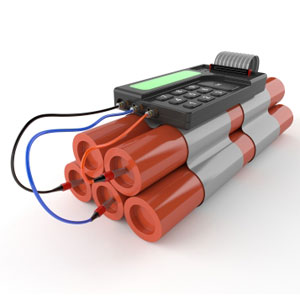 Powerful military style explosives, but not the detonators needed to set them off, were discovered in a Manhattan cemetery Monday, police said.

The bricks of C4 explosive were found in a black plastic bag in a secluded graveyard in the East Village neighborhood.

City police commissioner Raymond Kelly said the material was "very potent" and equivalent in quantity to the explosives used in the terrorist bombings in London in 2005.

"Inside a building, it could have caused an awful lot of damage," he said in a press conference outside the cemetery.

However there were no detonator caps and no immediate danger was posed to the public, he said.

The source and purpose of the explosives remained a mystery. Kelly said that intelligence officers and the bomb squad would be involved in analyzing the material at a police firing range in the Bronx borough north of Manhattan.

The material was "military grade" and was wrapped in protective covering. "It has yellow writing on a sort of military green material," he said.

It was "taken perhaps from a military installation years ago. We don't have the age," he said. "It looks like it's been there a significant period of time."

Police are also probing whether there was a link between the explosives and a bizarre note found on a police car nearby.

The note, written in chalk, said, "words to the effect of 'stop putting Christ on 2nd Street," Kelly said. It was signed "Jesus Christ" and addressed: "I really hope one of you finds this."

"It's difficult to tell when this may have been written. What we'll do is look at cameras in the area," Kelly said.