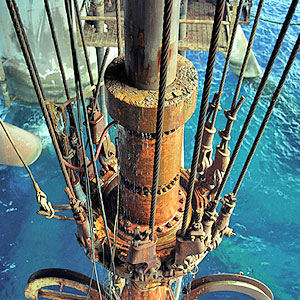 The Macondo well, which spilled an estimated 4.9 million barrels of oil into the Gulf of Mexico, has been secured and no longer constitutes "a threat," a senior US official said.

"I'm very pleased to announce that with the new blow-out preventer on this well, the cement that was previously put into this well, that this well does not constitute a threat to the Gulf of Mexico at this point," said Admiral Thad Allen, the US official overseeing the spill response.

A new valve known as a blow-out preventer was placed over the well on Friday after crews removed the damaged device, which will now be examined by investigators looking into the causes of the disaster.

"We basically have secured this well as we would any well that was under production," Allen told reporters.

"We have essentially eliminated the threat of discharge from the well at this point."

Allen said efforts would likely resume this week to finish a relief well that will intercept the Macondo allowing a final "kill" operation from below the seabed.

BP has said it hopes the relief well will reach the damaged well by around mid-September, depending on weather conditions.

In a later statement, Allen said the damaged blow-out preventer was "removed from the Gulf of Mexico... and is now under the supervision of the Deepwater Horizon Criminal Investigation Team and FBI Evidence Recovery Team."

The busted well has been shut in since July 15 when a cap was closed over the leak and engineers subsequently carried out a so-called "static kill," pumping heavy fluid and then cement into the top of the well to seal off the flow.

The spill, the worst in US history, was sparked by an April 20 explosion aboard the BP-leased Deepwater Horizon oil rig, which killed 11 workers.

It fouled beaches in all five Gulf of Mexico states -- Texas, Louisiana, Mississippi, Alabama and Florida.

Coastal Louisiana, still struggling to recover from 2005's Hurricane Katrina, was particularly hard-hit as crude oozed into fragile wetlands and forced the closure of large swathes of fishing grounds.

Many shrimpers, fishermen and those reliant on tourism for their income suffered financial disaster, and are now waiting to hear what compensation they can expect from a 20-billion-dollar fund established by BP at the behest of the White House.