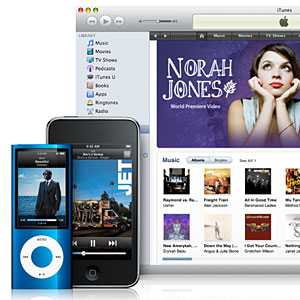 Gadget lovers were dreaming of iPods, iPads and bargain-rate Internet television Wednesday as Apple prepared to unveil its latest creations at a music-themed special event here.

The technology world has been rife with speculation regarding what Apple's chief executive Steve Jobs will introduce.

In its usual cryptic style, Apple sent out email invitations last week revealing little more than the place and time of the event, which will be held at 10:00 am (1700 GMT) at the Yerba Buena Center for the Arts in downtown San Francisco.

By Tuesday, the theater had been decorated with a giant banner of an acoustic guitar with a sound hole in the shape of the culture-changing California company's logo.

The safest bets were that Apple will roll out improvements to its line of iPod media players.

Apple traditionally upgrades its iPod line in September to position the trend-setting portable devices for the year-end holiday shopping season.

"It is time for the iPod Touch update," said analyst Rob Enderle of Enderle Group in Silicon Valley. "They tend to refresh the iPod now. The only thing that is heavy speculation is if they will mention Apple TV."

The iPod Touch was expected to be upgraded to get "pretty much everything" already included in the latest generation of the iPhone except phone capability, according to Enderle.

The iPod Touch is expected to inherit features like video chat and a crisper resolution screen from the iPhone 4.

There was also talk that cameras, front and back, may be added to the iPod Touch and an iPod Nano with a small touchscreen may be unveiled.

Apple is also expected to update and expand digital content offered for sale at its popular iTunes online store. Some wondered whether Apple would go so far as to upgrade the software of its freshly-launched iPad tablet computers.

Analysts will also be watching to see whether Apple responds to a move by Internet giant Google to expand its kingdom to the living room with an ambitious new service that lets people mesh television viewing with Web surfing.

Rumor in the blogosphere included the chance of a new generation Apple TV set-top box priced about 100 dollars, but Enderle cautioned that Apple might not want to cram too many big announcements into a single event.

In 2007, Apple released the first version of its digital media receiver that routes video, film, or television shows from computers to high-definition televisions but the company still refers to the devices as "a hobby."

"Google TV," developed in partnership with technology titans Sony, Intel and Logitech, fuses the freedom of the Internet with television programming.

Google executives vowed their TV platform will succeed where offerings such as Apple TV have foundered.

Google TV, which is powered by Google's Android software and Chrome Web browser, can be accessed using upcoming Web-enabled televisions from Sony or set-top boxes from Logitech that route Web content to existing TV sets.

Sony and Logitech said the sets and boxes will be available in the United States in time for the holiday shopping season late this year and be rolled out internationally in 2011.