US conservatives rally to 'restore America' 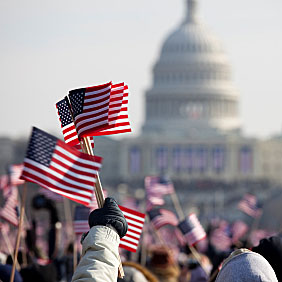 Thousands of Americans gathered Saturday in the heart of the US capital for a rally to "restore America," led by right-wing icons including talk show host Glenn Beck and former Alaska governor Sarah Palin.

The rally has attracted controversy because it is being held on the 47th anniversary of civil rights legend Martin Luther King Jr.'s "I Have a Dream" speech, at the Lincoln memorial on the National Mall, where King spoke.

Many of those attending Saturday's event belong to the conservative Tea Party movement, which some African-American groups have criticized as racist, prompting claims that the rally insults King's legacy.

But Beck, whose Fox News show is a must-watch for many US conservatives, said the date of the event is a coincidence, and that the rally is intended to be non-political. He also argues that he has every right to King's legacy.

"Whites don't own Abraham Lincoln. Blacks don't own Martin Luther King," he said earlier this month after being accused of trying to "hijack" the anniversary of King's legendary speech.

The aim of the Saturday rally, dubbed "Restoring Honor," has been loosely defined, with Beck saying it would be a faith-based show of support and gratitude for US military families, honoring "heroes, our heritage and our future."

But the inclusion of Republican superstar Palin on the roster of speakers and the rhetoric surrounding the rally suggest the event will be far from politics-free.

"We're not the people that we've allowed ourselves to become," added the rightwing pundit, who has rallied rising conservative opposition to President Barack Obama and his administration.

Those in the crowd at the event, which organizers said could draw some 100,000 people, described a need to reclaim American values.

"We want to see our nation return to its foundation principles," said Lou Tribus, a 67-year-old retiree who travelled from the southern US state of Tennessee to the capital for the rally.

Another attendee, Dawn, who declined to give her last name, said she wanted to "bring back the values that my country was founded on."

The 47-year-old, a small business owner from northern Virginia, said she could not understand opposition to the rally's location and date.

"I think Martin Luther King would agree with us," she told AFP. "I don't see why they think we shouldn't be here today."

But the question of race and racism has afflicted the new US conservative movement most prominently represented by the Tea Party movement.

Group members have touted openly racist signs at rallies, prompting the National Association of the Advancement of Colored People, the most numerous and oldest US organization of its kind, to pass a resolution condemning the Tea Party as racist.

Attendees at the rally Saturday largely honored organizer requests that they not bring banners or political signs. Instead, the predominantly white crowd, many seated on folding chairs and accompanied by their children, wore t-shirts with slogans including "Got principles?" and "Restoring Honor."