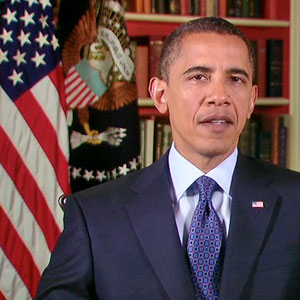 Three days before the official end of the US combat mission in Iraq, US President Barack Obama said on Saturday that the war in the country was "ending" and called Iraq a "sovereign" nation free to determine its own destiny.

"On Tuesday, after more than seven years, the United States of America will end its combat mission in Iraq and take an important step forward in responsibly ending the Iraq war," Obama said in his weekly radio address.

The president, who spends Saturday his last full vacation day at on the island of Martha's Vineyard, Massachusetts, will cover the issue of Iraq in a nationally-televised address from the Oval Office on Tuesday.

"As a candidate for this office, I pledged I would end this war," Obama recalled in the address. "As president, that is what I am doing. We have brought home more than 90,000 troops since I took office."

US troop numbers in Iraq fell below 50,000 last Tuesday in line with Obama's instructions as part of a "responsible drawdown" of troops, seven years on from the invasion that ousted Saddam Hussein.

American troop levels are now less than a third of the peak figure of around 170,000 during the US military "surge" of 2007, when Iraq was in the midst of a brutal Shiite-Sunni sectarian war that cost thousands of lives.

But more than 4,400 US servicemen and women have lost their lives in this war since it began in 2003, according to an AFP count based on data from www.icasualties.org, an independent website.

According to promises given by the US president, the US combat mission in Iraq will officially end on August 31. The remaining US troops, who will have a support and training mission, are scheduled to leave the country by the end of 2011.

"But the bottom line is this: the war is ending," Obama pointed out. "Like any sovereign, independent nation, Iraq is free to chart its own course. And by the end of next year, all of our troops will be home."

The president also used his address to call on Americans to honor those who have served in Iraq by sending them messages via such social networking Internet sites as YouTube, Facebook, Flickr or Twitter.

A strong critic of the war, Obama has always drawn a distinction between former Republican president George W. Bush's decision to invade Iraq and the daily fights US soldiers were waging in the country.

Addressing disabled veterans in Atlanta, Georgia, earlier this month, Obama noted that the Iraq war had sparked a vigorous debate in the country and that there were American patriots both in favor of and against the war.

But "what this new generation of veterans must know is this: our nation's commitment to all who wear its uniform is a sacred trust that is as old as our republic itself," the president said Saturday. "It is one that, as president, I consider a moral obligation to uphold."

He said his administration was modernizing and expanding veterans' hospitals and health care system, and adapting care to better meet the needs of veterans.