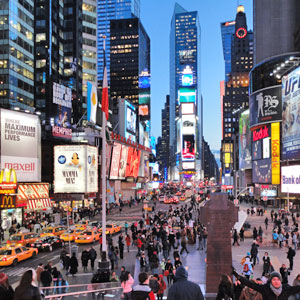 Police in New York foiled an attempted car bomb attack in the heart of Times Square which could have caused multiple death and destruction among weekend revellers, authorities said on Sunday.

Bomb squad officers discovered tanks filled with propane gas, fireworks and timing devices loaded into the back of a sports utility vehicle with tinted windows after being alerted by a T-shirt around 6:30 pm (2230 GMT) on Saturday.

There was no immediate claim of responsibility although the state governor said it was the work of terrorists.

"We are very lucky ... (to) avoid what could have been a very deadly event," the city's Mayor Michael Bloomberg said at an impromptu press conference early Sunday.

"The bomb squad confirmed that the suspicious vehicle indeed did contain an explosive device."

Bloomberg also said the bomb was homemade and "looked amateurish" but "certainly could have exploded."

"The attempt was to cause a significant amount of fire," he told reporters.

Police began "observing white smoke inside and coming out of the rear of the vehicle," Kelly said, and "began to clear pedestrians."

Kellly said that after an examination by bomb squad experts, the vehicle will be moved to a police location, where it will undergo closer scrutiny.

"Luckily, no one is hurt, and now the full attention of city, state and federal law enforcement will be turned to bringing the guilty party to justice in this act of terrorism," Paterson said in a statement.

The governor said New Yorkers owed a debt of gratitude to the police and a vigilant T-shirt vendor who spotted the suspicious vehicle.

Times Square, one of the busiest areas of New York, remained under police lockdown hours after the incident as security forces entered a huge manhunt for the driver of the dark green Nissan Pathfinder.

"We do not know who drove the car," Bloomberg said. "We have no idea who did this or why."

Kelly said that the vehicle had license plates belonging to a different vehicle and had been caught driving in the area just before the incident.

Firefighters, then bomb squad staff were called in.

No detail was given on how the components were meant to have fitted together and whether the clocks were used as timers.

But the the Virginia-based center said it was "too early to determine" the group or individuals behind the bid.

The bomb scare raised tensions across the United States where security forces have been on edge since a Christmas Day alleged attempt by a Nigerian man to set off a bomb on a US airliner.

The White House said President Barack Obama had been briefed on the incident in Times Square.

"The president commended the quick action by the NYPD and asked John Brennan to communicate to NYPD that the federal government is prepared to provide support," White House press secretary Robert Gibbs said.

Brennan, who is the president's deputy national security adviser, is working with the NYPD and others and will continue to keep the president up to date on the investigation, the White House said.

New York City police are on constant alert after a string of terrorist plots and alleged plots in the wake of the September 11, 2001 attacks.

In December they closed Times Square while inspecting a van at first feared to contain a bomb, but which turned out to be carrying nothing dangerous.

The 25-year-old could be sentenced to life in prison after pleading guilty to conspiracy to use weapons of mass destruction, conspiracy to commit murder in a foreign country and providing material support to the Al-Qaeda Islamist network.

Last year, four New Yorkers went on trial in an alleged plot to bomb a synagogue in the city and shoot down military planes.

Nearly 3,000 people died in the 9/11 attacks when airliners hijacked by Islamist suicide squads slammed into the Twin Towers of the World Trade Center in Manhattan, demolishing both sky scrapers.