"Popeye" to hit the big screen in 3D 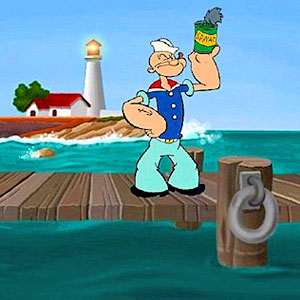 Popeye's famously massive forearms will bulge larger than ever when the squinty-eyed sailor makes his return to the big screen in 3D, industry media reported Tuesday.

No date has been announced for the movie's release.

The film will be made by Sony Pictures Animation with its ImageWorks division handling the computer graphics.

"As one of the earliest animated characters... Popeye has become one of the most enduring and iconic cartoon characters of all time and indelibly linked to the evolution of animation," said Hannah Minghella, president of production for Sony Pictures Animation.

Popeye was last seen on the big screen in 1980 when comedian Robin Williams starred in a live-action version directed by Robert Altman.

In each episode of the cartoon, the iconic sailor invariably succeeds in getting himself or his associates out of a jam, but only after consuming a can of spinach, which has the effect of magically giving him Herculean strength.