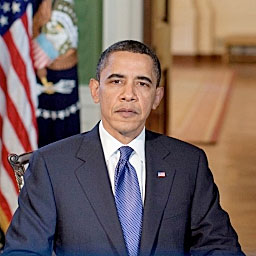 President Barack Obama looked to energize his Democratic allies with an in-person appeal for his historic health care overhaul Saturday, the eve of a cliffhanger vote on the sweeping legislation.

Obama's 11th-hour appeal on behalf of the bill, which would bring the world's richest country closer than ever to guaranteeing health coverage to all of its citizens, came as Democrats claimed momentum and predicted victory.

But pockets of protestors against the measure were waving "Kill the Bill" signs in the sunshine outside the Capitol, while House Republicans inside appealed for help in their last-ditch fight to thwart the measure.


"Republicans can't beat this bill, but the American people can. It's not too late to make your voice heard," House Minority Leader John Boehner said. "The only responsible course of action is to scrap this health care bill."

Despite Democratic shows of optimism, it was not yet clear whether they had the 216 votes needed to ensure passage in a ballot expected Sunday after months of setbacks, bitter partisanship, and legislative logjams.

Obama, who has staked his presidential legacy on the overhaul, sounded a triumphant note Friday, rekindling the spirit of change that powered his euphoric 2008 election campaign but has been dimmed by the slog of government.

"Right now, we are at the point where we are going to do something historic this weekend," Obama told a rally in northern Virginia billed as a rousing climax to his plan to offer health care to 32 million uninsured Americans.

"In just a few days, a century-long struggle will culminate in a historic vote," Obama said, as 8,500 supporters chanted his campaign theme "Yes We Can" in a sports arena.

The president had held 64 meetings or telephone calls with wavering lawmakers as of late Friday, the White House said.

"I'm very excited about the momentum that is developing around the bill," House Speaker Nancy Pelosi said.

Boccieri, Boyd, Kosmas and Murphy had voted against the House health care bill in November. Wilson voted for it then but had been undecided about Sunday's vote.


Despite these advances, Pelosi stopped short of saying she had the votes in hand to pass the 940-billion-dollar measure after a dramatic week of arm-twisting and head counts.

In a boost to Obama both the American Medical Association, previously hostile to some aspects of health reform, and the AARP, a lobby group for retirees, have now endorsed the legislation.

If the House passes the bill on Sunday, Obama would sign it into law.

The Senate would then be expected to vote on a House-passed package of fixes to the bill that would amend that law and make it more palatable to House members.

Obama was due to meet Democratic lawmakers in a vast auditorium in the Capitol's sleek visitors' center at 3:05 pm (1905 GMT), along with Senate Democratic Majority Leader Harry Reid.

Reid's presence could serve to reassure House members the Senate will do its part by endorsing changes to the original legislation.

The House Rules Committee met early Saturday to craft the legislative language that would govern Sunday's vote, as Pelosi looked to placate a platoon of anti-abortion Democrats unhappy with the bill's restrictions on government money paying for the procedure.

Republicans have mounted a fierce campaign designed to stop the bill, which they say would hike taxes and lead to a government takeover of the mostly private health care industry.

The bill, which would bring about the most sweeping overhaul of its kind in four decades,

would bring an estimated 95 percent of the population to universal health coverage.

Democrats are also touting an estimate by the non-partisan Congressional Budget Office that says the bill could cut 130 billion dollars from the bloated US deficit through 2019 and 1.2 trillion in the subsequent 10 years.

The bill would create new insurance marketplaces starting in 2014 and require most Americans to carry insurance, while offering subsidies to many.

Some of its most popular measures include bans on insurers denying coverage because of pre-existing illnesses, imposing lifetime caps on coverage or dropping people from coverage when they get sick.