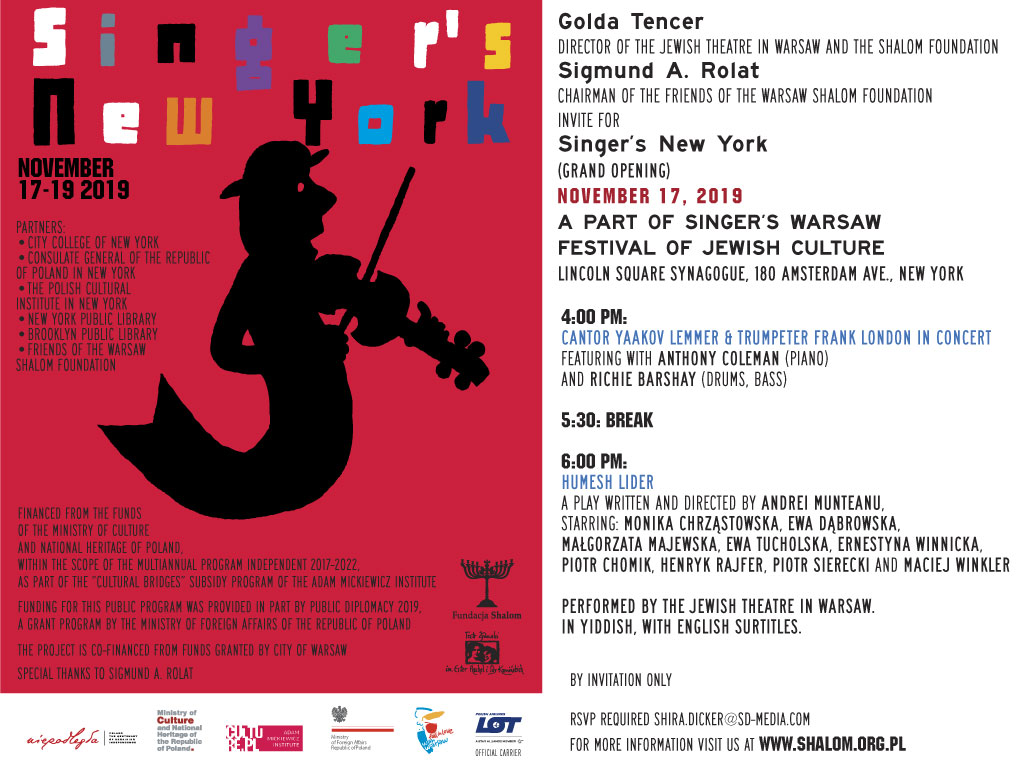 Join us for The Singer’s Warsaw Festival of Jewish Culture, one of the most celebrated arts festivals in Poland, which returns to New York City, November 17–19, 2019.

This one of the most celebrated arts festivals in Poland returns to New York City for the second year. The most highly anticipated event on Warsaw’s cultural calendar, this year’s local program features a cantorial concert by Yaakov Lemmer and Frank London, film screenings, readings of short stories by I.B. Singer, and plays by the Jewish Theater in Warsaw, one of only two Jewish theaters in Europe.

Now in its 16th edition, the Singer’s Warsaw Festival of Jewish Culture is an iconic annual event organized by Warsaw’s Shalom Foundation in cities associated with the Nobel Prize winner Isaac Bashevis Singer. The artistic director is Gołda Tencer, director of the The Ester Rachel and Ida Kaminska Jewish Theatre in Poland – Center of Yiddish Culture, creator of the Shalom Foundation.

The festival opens November 17 at the Lincoln Square Synagogue with a concert by the world-class cantor Yaakov Lemmer and Grammy Award winner Frank London, featuring the work of Gershon Sirota and Mordechai Gebirtig. This unforgettable musical event will be followed by a performance of Itzik Manger’s play Humesh Lider by the Jewish Theater in Warsaw, directed by Andrei Munteanu, with a score by Dov Seltzer, one of the world’s most acclaimed contemporary composers and conductors. Itzik Manger takes us on a journey through the rich world of Yiddish tradition with the lighthearted, funny and informative poems from his “Five Books of the Torah” and their Biblical characters, whom the author depicts as contemporary Jews living in small-town Poland in the 1920s.

Naturally, the festival will also showcase the work of its namesake, Isaac Bashevis Singer. Children and adults are invited to attend Singer Storytime at the Brooklyn Public Library — Midwood Branch and the New York Public Library - Riverside Branch.

The festival continues at The City College of New York, which will host screenings of the films Yentl directed by Barbara Streisand and Enemies, A Love Story directed by Paul Mazursky, both adapted from the writings of I.B. Singer.
Both screenings will be followed by a discussion panel hosted by Andrzej Krakowski, a New York-based screenwriter, director and film producer, author of the book Pollywood.
The festival will conclude with a performance of A Wall, directed by Maciej Wojtyszko and starring Ewa Dąbrowska on November 19 at the Consulate General of the Republic of Poland in New York.

This monodrama by the Jewish Theater in Warsaw is inspired by the true story of Irena Sendler who, during World War II, saved the lives of thousands of children by smuggling them out of the Warsaw Ghetto. For this act of heroism, she was recognized as being among the Righteous Among the Nations. In her lifetime, Sendler, who was also named the “Female Varsovian of the Century,” remained largely silent about her remarkable deeds.