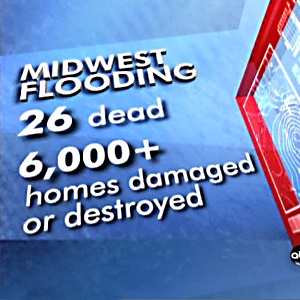 Ferocious thunderstorms, heat and humidity added to the Midwest's flooding misery Friday as thousands of people returned to damaged homes, many without electricity to run fans or pumps.

Michigan was pounded for a second straight day by storms that killed a motorcyclist and spawned a tornado that ripped out hundreds of trees.

The storm system had struck Chicago on Thursday night with a sudden downpour and 70 mph wind that tore down trees and damaged buildings. In the city's suburbs, part of an industrial facility's roof collapsed, injuring 40 people.

"Out of nowhere, the sky just went black," said Kimber Hall, 20, who was riding her bike along Chicago's Lake Michigan shore when the storm hit. "Sheets of rain. Lightning hit a tree about 25 feet away from me. A branch hit me in the face."

Friday morning, another band of thunderstorms was drenching communities from Missouri, through Iowa and into Illinois and Wisconsin.

Most of southern Iowa was under a flash flood watch through evening as as much as 8 inches of rain fell, the National Weather Service said. In Ottumwa, residents were asked to conserve water because the rain had backed up sewers and flooded a pump room at the water plant. The tap water wasn't contaminated yet, but the city's 25,000 residents were advised to boil it.

The Des Moines river was rapid rising at the small southeastern Iowa town of Bentonsport Friday, and business owners were quickly moving furniture and valuables to higher ground as people fled the downtown area.

The river topped its banks at noon and was flowing over a riverfront park, said Joy Hanson, who owns the Mason House Inn & Caboose Cottage, a bed and breakfast at Bentonsport. She said there wasn't time to start sandbagging.

"It's like a panic," she said. "There are a lot of people here from other towns helping out."

Flooding in northern Indiana slowed drivers on busy Interstate 80/94, where officials shut down a 3-mile stretch of the eastbound lands and some of the westbound lanes.

In Illinois, forecasters warned residents in the northern part of the state to prepare for flooding as another 2 inches of rain was expected Friday afternoon and evening.

"That's what we're worried about right now," said weather service meteorologist Nathan Marsili. "It could turn out to be a pretty bad flooding situation for the area."

Nearly a week of powerful storms, heavy rain and devastating flooding across the upper Midwest has damaged hundreds of homes and has been blamed for at least 17 deaths.

The powerful storms that hit Illinois blew over a tree in rural Knox County, killing one man on Thursday. In Michigan, a 77-year-old motorcyclist died when his bike hit a fallen tree in Kalamazoo County, the sheriff's office said. Flooding in Ohio was blamed for the death of a 92-year-old man who drowned trying to get to safety after his car became trapped in floodwater near Findlay.

About 310,000 homes and businesses in northern Illinois, 100,000 in Michigan and 30,000 in northern Indiana were without power afterward. ComEd spokesman Tom Stevens said it could take days to restore power for some customers north of Chicago.

In hard-hit Ohio, residents got a break from the rain but temperatures in the upper 90s made that the cleanup from widespread flooding even more of a struggle.

In Findlay, which saw its worst flooding in nearly a century, people tried to pump water from their basements and tally their losses.

"Most of it's ruined," Joe Lamb said as he sorted through a bin of soaked NASCAR memorabilia, hosing off the mini Dale Earnhardt collector cars and tossing the rest. "Our Christmas stuff, everything."

In Chicago, a few businesses found a bright side to the storm Thursday night.

"People would not leave," said bartender Nick McCann. "We had $2 margaritas, and people were getting hammered."

About 500 flights at O'Hare International Airport were canceled Thursday evening and others delayed for more than 2 1/2 hours, Chicago Aviation Commissioner Nuria Fernandez said.

In southwestern Wisconsin, the National Guard pumped water to relieve pressure on at least one dam, said Mike Goetzman, a spokesman for Wisconsin Emergency Management. The earthen dam had been eroded earlier this week by water from the weekend thunderstorms.

Iowa officials were keeping a close eye on the Des Moines River, and In the river town of Fort Dodge, crews scrambled to shore up a levee.

"Most of them are sandbagging and keeping it at bay," she said.