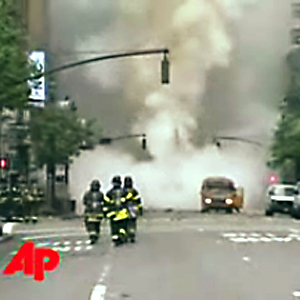 An underground steam pipe explosion tore through a Manhattan street near Grand Central Terminal on Wednesday during the evening rush hour, sending residents running for cover amid a towering geyser of steam.

New York Police Department spokesman Paul Browne said it was not terrorism related. A fire department spokeswoman said some people were taken to area hospitals, but no details were available. Subway service in the area was suspended because of the explosion.

A plume of steam, sometimes white and sometimes muddy brown, shot into the air from a gaping hole in the street near the train station and was as high as the nearby Chrysler Building. The air near the site was filled with debris.

Heiko H. Thieme, an investment banker, had mud splattered on his face, pants and shoes. He said the explosion was like a volcano. "Everybody was a bit confused, everybody obviously thought of 9/11."

Darryl Green, who works with AT&T, said the buildings shook, so he and his colleagues dashed down 30 flights of stairs.

"As we came out onto the street, the whole street was dark with smoke, " he said.

A small school bus was abandoned just feet from the spot where the jet spewed from the ground.

Thousands of commuters evacuated the train terminal, some at a run, after workers yelled for people to get out of the building.

Debbie Tontodonato, 40, a manager for Clear Channel Outdoor, said she thought the rumble from the explosion was thunder.

"I looked out the window and I saw these huge chunks that I thought were hail, " she said. "We panicked, I think everyone thought the worst, thank God it wasn't. It was like a cattle drive going down the stairs, with everyone pushing. I almost fell down the stairs."

Streets were shut down in several blocks in all directions.

Millions of pounds of steam are pumped beneath New York City streets every hour, heating and cooling thousands of buildings, including the Empire State Building.

The steam pipes are sometimes prone to rupture, however. In 1989, a gigantic steam explosion ripped through a street, killing three people and sending mud and debris several stories into the air.

That explosion was caused by a condition known as "water hammer, " the result of condensation of water inside a steam pipe.