Be the Power that Saves Lives Today. "One Mine One Life Worldwide Movement for a Mine-Free World" 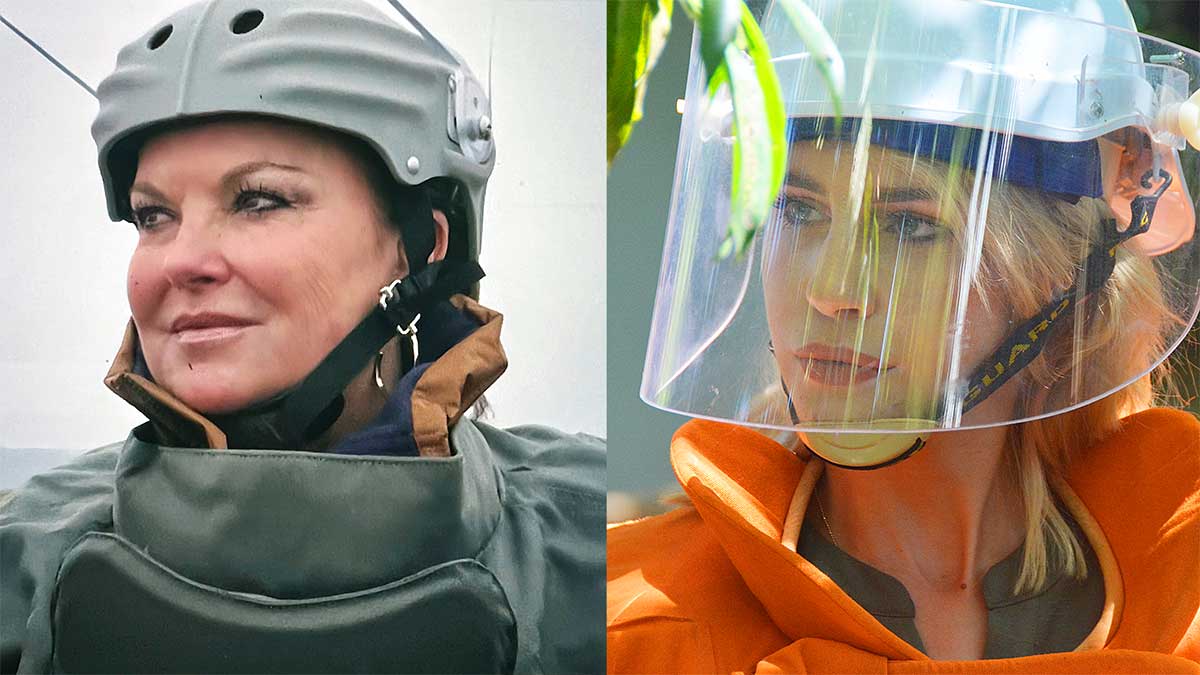 On March 21, 2022, a Parallel Event “One Mine One Life Worldwide Movement for a Mine-Free World” took place during the sixty-sixth session (CSW66) of the Commission on the Status of Women in United Nations, New York. The NGO CSW Forum runs parallel to the official session of the Commission of the Status of Women taking place at the UN Headquarters.

The sixty-sixth session (CSW66) of the Commission on the Status of Women will take place from 14 to 25 March 2022.

60,000,000 people everyday life in a fear of being killed or maimed by landmines.

The number of children who fell victim to landmines in the past year has increased significantly. Children account for 54 percent of all civilian casualties. There are landmines around the globe that were planted years ago.

As Paul Jefferson, one of the earliest humanitarian deminers said “a landmine is a perfect soldier: Ever courageous, never sleeps, never misses”.

And they kill. Landmines planted during the wars from the past kill children today.

But there are also newly planted landmines. In Ukraine, along humanitarian corridors that were supposed to be designed for the safe evacuation of civilians, children.

The Parallel Event was led by Princess Angelika Jarosławska Sapieha, an International Peace Ambassador, philanthropist, businesswoman. The Princess is the initiator of the ’One Mine, One Life’ movement and campaign for a mine-free world.

Landmines cause injuries and deaths of people all over the world every day. That is why the panelists from three continents gathered together to discuss global demining action.

“Today we are here to raise awareness and to encourage the international community to treat demining action as one of the most important goals for our human global family”. - This was one of the first words of Princess Angelika Jarosławska Sapieha, who highlighted, that in the panel discussion they host panelists from different parts of the globe, who are supporting anti-landmine action on several fronts: by advocating human rights, raising awareness about landmines, and saving human lives on minefields.

Princess Angelika Jarosławska Sapieha stressed, that anti-personnel mines violate one of the most important, non-negotiable human rights - to live and develop, and function without constant fear.

Svitlana Salamatova, President of the Geopolitical Alliance of Women, Head of the Ukrainian Women in the UN Project, Co-founder of ICA Ukraine, Head of the independent delegation of Ukrainian women in the UN in emotional speech stressed, that there are newly planted landmines in Ukraine along humanitarian corridors that were supposed to be designed for the safe evacuation of civilians, children.

She added: “Today, Ukraine has a wide field of mining. Almost all key routes throughout the country are mined. All key infrastructure interchanges are mined. Key agricultural infrastructure as well. In the event of damage to major roads, the movement of humanitarian goods is at high risk of death”.

She also stressed out the long-term harm of landmines in Ukraine: “For the next 100 years, we, together with you, demining specialists, specialized foundations, and peacekeepers will have the opportunity to actively cooperate for thepurpose of clearing our Ukrainian land of mines, so that you and our children can live in safety”.

Brendan Moriarty, American film director, and producer, director of The Road to Freedom, who was born and grew up in Cambodia told about the incredible contribution to many international demining organizations around the globe, who are fighting for decades to clear the world from landmines. He added, that there is still a lot of work to be done and we need the global butterfly effect to make it happen.

Brendan Moriarty is preparing a movie "The Lost Pearls”, which might create a very important impact, raise awareness about landmines and life of landmine victims, who need long-term medical assistance. This is a story of two young Cambodian children who have been affected by landmines near their neighboring village. Landmines hurt bodies, minds, and hearts. Landmine victims not only need urgent physical rehabilitation, prostheses, and assistive devices but also psychological and social support.

“As an artist and filmmaker, I made my first two films in Cambodia. Growing up in Cambodia gave me a personal love for Cambodia and its ancient history (…). Growing up over there I saw it every day how it affects people…(…) I was always conscious of it. That’s why I feel that this panel and this summit is a great opportunity to broaden the global perspective.”

Brendan Moriarty expressed gratefulness to all the international organizations which lead demining action and highlighted how important is the support of individuals.

“Right now definitely is a global need to bring a real sense of what can be achieved in the coming years. So that this can be behind us. We talk about landmines from decades.”

In 2003 he heard of an ex-Khmer Rouge soldier, Aki Ra, whose quixotic mission was clearing landmines by hand. He and Jill traveled to Siem Reap, Cambodia, to find Aki Ra and learn more about his work. After meeting him, he returned to the US and started the Landmine Relief Fund, a 501c3 charity, headquartered in Palm Springs, California to help support Aki Ra’s work.

He traveled to Cambodia regularly to work with Aki Ra who had also adopted over 2 dozen maimed and orphaned children, raising them alongside his own kids.

That was just the beginning.

The deminers dig up landmines by hand to rid Cambodia of its deadly legacy. The Morses traded in comfortable retirement in Palm Springs and moved permanently to Cambodia to help. They raise funds, staff the Cambodian Landmine Museum, and have opened schools to help educate the children of Cambodia.

Additionally, the Landmine Relief Fund support Aki Ra’s other projects, such as the school at the Cambodia Landmine Museum in Siem Reap, which offers English lessons to local children, and the Rural School Village Program (RSVP), which builds schools in rural villages where Cambodian Self Help Demining has cleared minefields or where there is no access to education.

Due to the great efforts of Bill Morse and his wife, Jill, who moved to Cambodia and devoted their life to two missions: clearing Cambodia from landmines and supporting education growth, significant work has been done.

“My wife and I been here now for 40 years, helping to fund the demining work, building schools on the old minefields, setting up organic programs and rural villages programs (…)”. “Risk education is one of the five pillars of mine action. Most injuries today don’t happen in minefields. Half of the injuries in Cambodia last year happened outside the minefield. Happened because of the unexploded ordnance” - He added.

Bill Morse expressed: “The responsibility of clearing landmines is yours, and mine. It's the responsibility of all of us. We want a mine-free world by 2025. That’s the objective around the planet. Can we do that? I think in Cambodia we can. Will we do it? Only time will tell.What we need is funding. Money hires people, people clear landmines and when landmines are cleared, people live a productive life. The use of landmines will only stop when all of us will stand up and say “no”. When we will demand our governments to never use these terrible weapons that killed and maimed for decades”.

Max C. Meder, One Mine One Life Campaign, Chief Communication Officer expressed why today we need to unite for a mine-free world and why Mine Free World can be only accomplished with the involvement of the international community.

“We can win an irregular fight with landmines by joining forces and creating a real butterfly effect. Thanks to the commitment of communities around the world we are able to save the lives of innocent people every day” - He expressed.

He also explained the symbol of the One Mine One Life campaign - Butterfly with the world map in a heart. “The symbolism of our campaign is not accidental. The heart symbolizes that landmines hurt the bodies, minds, and hearts of their victims. We need to open our hearts to realize that every day innocent people and children die or are maimed by landmines. The world map on the butterfly wing symbolizes a global problem. Butterfly has become a metaphor for transformation and hope. I truly believe that together we can create a positive butterfly effect and get rid of these discriminate, inhuman weapons”.

“The goal of One Mine One Life is not only demining but also preventing the formation of new mines. The campaign was created to build awareness and publicize the need to help all organizations, following the example of Princess Diana. As One Mine One Life, we want to build social responsibility and provide support to all brave deminers who, risking their lives every day, do not have always enough time to show their heroic and wonderful work”.

“I truly believe that a butterfly will become a symbol of the end of landmines and beginning of life. Let’s make our dream of a world free of landmines a new reality”. - He added.

One of the distinguished panelists was Heidi Kuhn - Founder of Roots of Peace, a humanitarian organization dedicated to the removal of landmines and the subsequent replanting and rebuilding of war-torn regions.

Founded in 1997 by Heidi Kuhn, the goal of Roots of Peace is to turn minefields into farmland and support victims of landmine accidents. Roots of Peace has impacted over 1.1 million farmers and family members, spanning seven countries.

Over the past years, Heidi has grown Roots of Peace across the world. She has been recognized by numerous world leaders including UN Secretary-General Kofi Annan, His Holiness Pope Benedict XVI, His Holiness Pope Francis, the Dalai Lama, the Grand Mufti of the Dome of Jerusalem, and many heads of state and government.

“Landmines are cancer to the earth” - she emphasizes.

“I stand with you, Princess Angelika to call for a mine-free world. It takes a pound to detonate a landmine which is an average weight of a newborn child” - Heidi Kuhn expressed.

Heidi Kuhn began the month detonating eight anti-tank landmines in Karabakh, Azerbaijan, and witnessed the horror of the impact of a single landmine.

Princess Angelika and Heidi Kuhn identified their first project together in the fields of Karabakh, Azerbaijan—a region that once grew the finest wines in Europe. Now, it is a Black Garden filled with landmines that hold the land hostage for future generations.

Commission on the Status of Women, Sixty-sixth session (CSW66)

This year's CSW priority theme is “Achieving gender equality and the empowerment of all women and girls in the context of climate change, environmental and disaster risk reduction policies and programs”.

We should remember that landmines cause two different effects: Short-term effects generally include the physical destruction of close-range vegetation and killing/injuring of wildlife. Medium-term impacts may include a deterioration in soil composition preventing cultivation lands to return to levels of agricultural production before a landmine explosion.

Due to climate change, severe tropical storms and flooding were reported to have caused explosive items to move. In the future, areas previously considered as a low priority for survey and clearance may now need to be re-prioritized or targeted if they are more vulnerable to climate change. That is why quick and effective demining is a priority to save lives.

One Mine One Life

A worldwide movement 'One Mine One Life' represents the generation of change-makers. Inspired by anti-landmine activist Princess Diana, we continue the action of raising awareness about landmines and supporting demining. One Mine One Life's mission is to build social responsibility and provide support to all brave deminers who, risking their lives every day, do not always have enough time to show their heroic and wonderful work.

To support this mission visit: www.onemineonelife.com