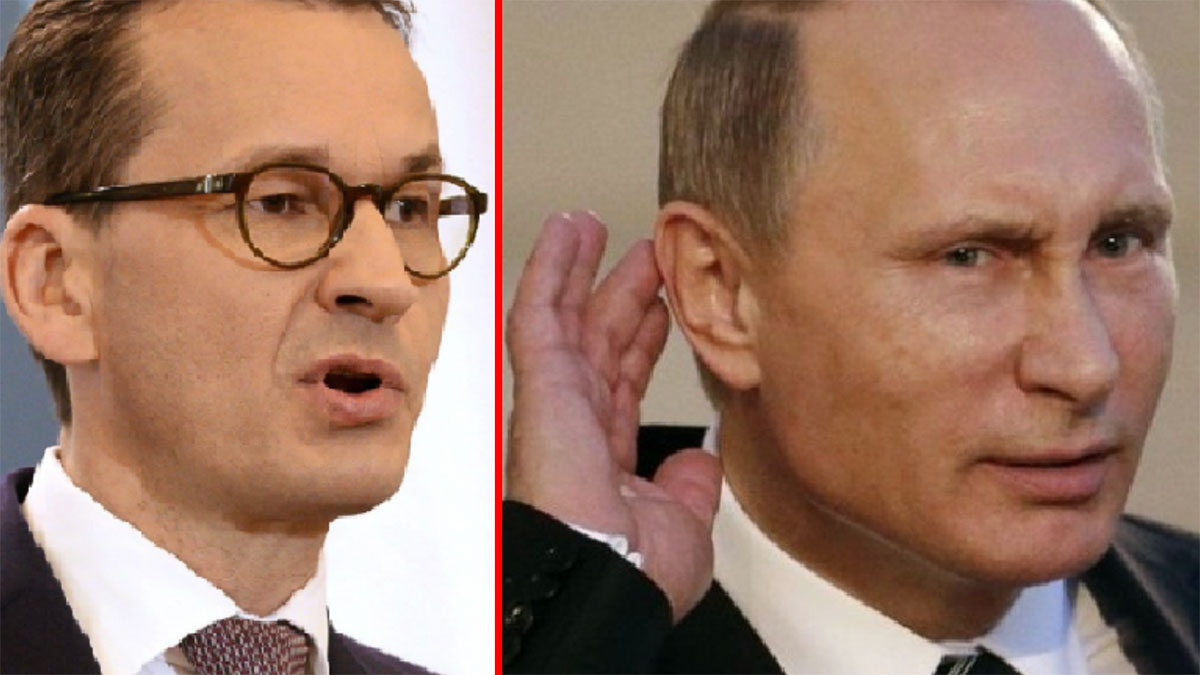 The 20th century brought the world inconceivable suffering and the death of hundreds of millions of people killed in the name of sick, totalitarian ideologies. The death toll of Nazism, fascism and communism is obvious for people of our generation. It is also obvious who is responsible for those crimes – and whose pact started World War II, the most murderous conflict in the history of humankind.

Unfortunately, the more time passes since these tragic events, the less our children and grandchildren know about them. That is why it is so important that we continue to speak out loud, telling the truth about World War II, its perpetrators and victims – and object to any attempts at distorting history.

The memory about this evil is particularly important for Poland – the war’s first victim. Our country was the first to experience the armed aggression of Nazi Germany and Soviet Russia. Poland was the first country that fought to defend free Europe.

However, resistance to these evil powers is not only the memory of Polish heroism – it is something much more important. This resistance is the legacy of the entire now free and democratic Europe that fought against two totalitarian regimes. Today, when some want to trample the memory of these events in the name of their political goals, Poland must stand up for the truth. Not for its own interest, but for the sake of what Europe means.

Signed on 23 August 1939, the Molotov-Ribbentrop pact was not a “non-aggression pact.” It was a political and military alliance, dividing Europe into two spheres of influence – along the line formed by three Polish rivers: the Narew, Vistula, and San. A month later it was moved to the line of the Bug river, as a result of the “German-Soviet Boundary and Friendship Treaty” of 28 September 1939. It was a prologue to unspeakable crimes that over the next years were committed on both sides of the line.

On 22 September 1939 a great military parade was held in Brest-Litovsk – a celebration of Nazi Germany’s and Soviet Russia’s joint defeat of independent Poland. Such parades are not organised by parties to non-aggression pacts – they are organised by allies and friends.

This is exactly what Hitler and Stalin were – for a long time they were not only allies but in fact friends. Their friendship flourished so much that, when a group of 150 German communists fled the Third Reich to the USSR before World War II broke out, in November 1939 Stalin handed them over to Hitler as “a gift” – thus condemning them to a certain death.

The USSR and the Third Reich cooperated closely all the time. At a conference in Brest on 27 November 1939, representatives of both countries’ security services discussed the methods and principles of cooperation to fight Polish independence organisations on the occupied territories. Other conferences of the NKVD and SS officers on their cooperation were held inter alia in Zakopane and Krakow (in March 1940). These were not talks on non-aggression – but on liquidating (that is murdering) people, Polish citizens, and on joint, allied actions to bring about a total destruction of Poland.

Without Stalin’s complicity in the partition of Poland, and without the natural resources that Stalin supplied to Hitler, the Nazi German crime machine would not have taken control of Europe. The last trains with supplies left the USSR and headed for Germany on 21 June 1941 – just one day before Nazi Germany attacked its ally. Thanks to Stalin, Hitler could conquer new countries with impunity, lock Jews from all over the continent in ghettos, and prepare Holocaust – one of the worst crimes in the history of humankind.

Stalin engaged in criminal activities in the east, subduing one country after another, and developing a network of camps that the Russian Alexander Solzhenitsyn called “the Gulag Archipelago.” These were camps in which a slave, murderous torture was inflicted on millions of opponents of the communist authorities.

The crimes of the communist regime started even before the outbreak of World War II –the starvation of millions of Russians at the beginning of the1920s, the Great Famine which led to the death of many millions of inhabitants of Ukraine and Kazakhstan, the Great Purge during which nearly 700 thousand political opponents and ordinary citizens of the USSR, mostly Russians, were murdered, and the so-called “Polish Operation” of the NKVD in which mainly the USSR citizens of Polish descent were shot to death. Children, women and men were destined to die. In the “Polish Operation” alone, according to the NKVD data, over 111 thousand people were shot to death deliberately by Soviet communists. Being a Pole in the USSR at that time meant a death sentence or many years of exile.

This policy was continued with crimes committed after the Soviet Union invaded Poland on 17 September 1939 – the crime of  murdering over 22 thousand Polish officers and representatives of elites in places such as Katyn, Kharkiv, Tver, Kyiv, and Minsk, the crimes committed in the NKVD torture cells and in forced labour-camps in the most remote parts of the Soviet empire.

The greatest victims of communism were Russian citizens. Historians estimate that between 20 and 30 million people were killed in the USSR alone. Death and forced labour-camps awaited even those that every civilised country provides care for – prisoners of war that returned to their homeland. The USSR did not treat them as war heroes but as traitors. That was the Soviet Russia’s “gratitude” for prisoners of war – soldiers of the Red Army: death, forced-labour camps, concentration camps.

Communist leaders, Joseph Stalin in the first place, are responsible for all these crimes. Eighty years after World War II started, attempts are made to rehabilitate Stalin for political goals of today’s President of Russia. These attempts must be met with strong opposition from every person who has at least basic knowledge about the history of the 20th century.

President Putin has lied about Poland on numerous occasions, and he has always done it deliberately. This usually happens when Russian authorities feel international pressure related to their activities – and the pressure is exerted not on historical but contemporary geopolitical scene. In recent weeks Russia has suffered several significant defeats – it failed in its attempt to take complete control over Belarus, the EU once again prolonged sanctions imposed on it for illegal annexation of Crimea, the so-called “Normandy Format” talks did not result in lifting these sanctions and simultaneously further restrictions were introduced – this time by the US, significantly hindering the implementation of the Nord Stream 2 project. At the same time Russian athletes have just been suspended for four years for using doping.

I consider President Putin’s words as an attempt to cover up these problems. The Russian leader is well aware that his accusations have nothing to do with reality – and that in Poland there are no monuments of Hitler or Stalin. Such monuments stood here only when they were erected by the aggressors and perpetrators – the Third Reich and the Soviet Russia.

The Russian people – the greatest victim of Stalin, one of the cruellest criminals in the history of the world – deserve the truth. I believe that Russians are a nation of free people – and that they reject Stalinism, even when President Putin’s government is trying to rehabilitate it.

There can be no consent to turning perpetrators into victims, those responsible for cruel crimes into innocent people and attacked countries. Together we must preserve the truth – in the name of the memory about the victims and for the good of our common future.

Recent CEEC Policy Briefing: Runup to the 2021 NATO Summit Video
PAC: CEEC Policy Briefing: Runup to the 2021 NATO Summit on April 22
G7 Foreign Ministers' Statement on Ukraine
Donations for the Journalist Victims of Belarusian Repressions
Angelika Jarosławska Sapieha was Awarded by Grand Order – the Stefan the Great Cross
Resilience and Russian Interference: Neutralizing the Kremlin’s Campaign to Dismantle Democracy - discussion
Memorial as Survivors return to Auschwitz death camp 75 years after its Liberation
The President of Poland: The Truth that Must not Die
The Parliament of The Republic of Poland Against Manipulating and Falsifying History by Russia
SEE MORE