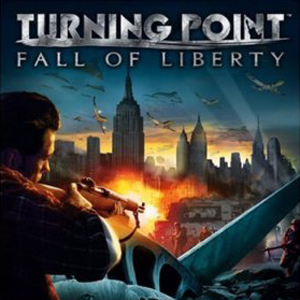 Another great story concept ruined by a terrible game...

It seems as of developers these days have experienced an influx of innovative new ideas and storylines. Many of these have managed to turn out decent or good games based on these ideas. Unfortunately, most don't, and their games are doomed by several large design flaws or other problems. Turning Point is one of those games.

Turning Point's premise sounds cool. Winston Churchill is killed in a car accident preceding the invasion of Britain. This ends up in a radically different history than with which we are familiar with today. Europe is overrun by the Nazis and the United States remains with its isolationist policy intact. A decade or so passes and the Nazis gather a huge invasion force to strike the USA overseas. You're just an ordinary citizen working in New York City when the attack begins.

Right at the onset, you're treated to some problems. The game abruptly plops you on a skyscraper at the time that the city is attacked. You make your way predictably down some steel griders, with the path being dictated by a series of beams which explode and fall off before you approach them. The game continues through linear levels and lasts 3 to 5 hours depending on difficulty.

One mechanic the game introduces is a third person grappling technique that you can initiate when you find an interactive object or enemy. If you do it to an enemy, you're presented with two choice: Instant Kill, or Human Shield. The first one initiates one of a predictable set of animations that finishes off the enemy, while the other lets you use the enemy as a Human Shield. A problem with this is the weird camera angle that is introduced whenever you do this. The screen tilts about forty degrees and makes it a little bit harder to aim.

Turning Point's gunplay is plain horrid. All of the weapons, be it sniper rifles or SMGs, are woefully inaccurate. They also emit weak looking sounds and don't seem to do a lot of damage. The developer touted their weapons for depicting a more advanced Nazi army, but to me, they felt exactly like WW2 weapons in other games with some small cosmetic changes.

The AI is bad, also. The Nazis often get stuck out in the open, standing and simply waiting to get mowed down. Your allies are terrible shots and also extremely stupid, with terrible animation and some wonky dialogue.

The game uses Unreal Engine 3, and you wouldn't know it from simply playing it. The textures are low-rez and the lighting is decidedly last-gen. Turning Point dethrones Blacksite as the worst use of Unreal 3 to date. The PC version of the game has no mouse support in the menus and only 3 general graphical settings: Low, Medium, High.

The only saving grace for Turning Point is its orchestral music, which only lends a comic flair because it is a complete mismatch against the mediocrity of the rest of the game.

Turning Point was unfortunately handled by a group of developers who made some strange design choices and didn't spend enough time refining the game. Stay away from this title! My head was hurting after the first level...

Gameplay: 3 - Weapons are completely off. Environments are linear, story is not fleshed out and confusing.
Presentation: 4 - PC version menus have no mouse support, menus are drab, objectives are hidden in the pause menu, etc, etc...
Graphics: 4 - Terrible textures, terrible animation, terrible everything! This can't be Unreal 3!
Sound: 6 - About the only great thing about Turning Point is its music. Gun sounds and voice-acting are subpar.
Value: 4 - A three hour campaign on normal. Are you guys joking?