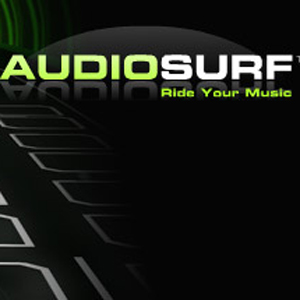 A fun and innovative rhythm game that won't break the bank...

The gaming public focuses so much on high-quality, big-budget releases that independent games are often swept to the side and ignored or shunned. These games often offer a bunch of innovation and fun... at a fraction of the cost of a regular video game. Music-based Audiosurf is an example of this exciting part of the gaming industry...

Audiosurf's premise is the ability to import any song you wish into the game. After this, you pick a difficulty level by selecting between several futuristic racing cars with different abilities and objectives. Audiosurf then takes the song and creates a race track based on it. Scattered around the race track are different colored blocks depending on your choice. The blocks often correspond to bass echoecs, guitar strums, and other parts of songs. Your goal is to ride along the track and snag these blocks, which are then stored in columns underneath your ship. If you match three or more, the blocks disappear and grant you points. In essence, Audiosurf turns your song into a puzzle game, requiring twitch skills to hop between the game's three lines of blocks and snag the right colors and power-ups to create combos with the highest point yield. The speed of the movement depends on the type and tempo of the song.

The best type of song to start Audiosurf off with is a rap or similar song with a slow, steady beat. You can then try some faster songs with varying beats and tempos to really get into the game. It's hypnotic to play, as I eventually found myself moving my ship to the beat of songs unconsciously. It really provides an incentive to go and buy new music, just to race on them and reach new high scores in order to reach higher and higher spots on the game's surprisingly comprehensive leaderboards. The only problem with these is the multiple ID3 tags a single song can have, meaning it can be incredibly hard to find other people who played the same song as you since the leaderboards are built off of these tags.

Audiosurf is an amazing, budget title. While its fun and varied gameplay is a refreshing premise, its the amount of customization and ability to build tracks off your own library of songs that makes it truly a gem. Plus, its only $10. What are you waiting for, hardcore and casual gamers alike, GET IT!

Gameplay: 9 - A racing track based on your own songs is home to a rhythm game with multiple options and gametypes. You can compare scores against other people playing that song.
Presentation: 9 - Nice clean interface and gameplay.
Graphics: 9 - Colorful blocks and stylized race tracks round out the game without requiring a NASA supercomputer!
Sound: 10 - Based off of whatever music you play, Audiosurf offers the ultimate in soundtrack customization.
Value: 10 - We've seen $60 games with less value, innovation, and fun than in this $10 gem.