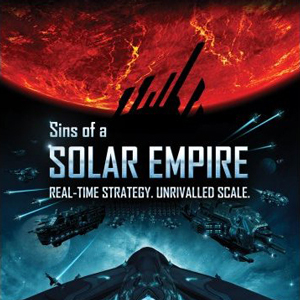 Sins is one of the deepest real-time strategy games to be released in years...

Each year is home to a number of big-budget releases by multi-billion dollar companies which temporarily dominate the gaming market. However, in recent years, there's been a upsurge in the frequency of lower-profile releases by upstart developers and publishers. Surprisingly, these games manage to compete with the big ones and even offer innovative features and twists which big companies are often afraid to take. Sins of a Solar Empire is a prime example of this.

An entry in the 4X genre of strategy games, Sins of a Solar Empire is distinct in that plays in real-time and is actually manageable regardless of its huge scale.

The premise of Sins is a galactic conflict which was spawned when the human-created Trade Emergency Coalition found itself at war with the Advent, a human faction that embraced psionic powers and were previously hunted to extinction by human ancestors, and the Vasari, an alien race escaping from an even larger, mysterious threat. There is no campaign, so instead, the single player experience consists of choosing a faction to play on one of many maps. There's also an achievement system that rewards you for some strange things, such as winning without researching a single military technology.

You start off in control of a single planet, and its your job to start exploring and colonizing worlds, all while looking for resources to exploits. Travel among planets is limited via strict space lanes, so some planets are natural choke points. There are several types of planets, some of which require specific research in order to do so. While it sounds hard, the game actually unfolds at a slow pace, letting you easily make decisions without being overwhelmed. You're helped by a side interface that basically allows you to see whats happening to your entire empire at one time.

Sins' economy is built on three types of resources: credits, metal, and crystal. You harvest the latter two from special asteroids and you gain credits by trading and taxing your people.

Ships you build include scouts and warships, which come in three classes. These range from frigates to larger cruisers, to humongous capital ships. Capital ships are expensive, but really powerful. There's a basic RPG element in that you can level them up in order to gain more abilities.

There is a basic democracy system, which is based on pleasing other factions by fulfilling missions in order to gain favor. There's also a pirate system, where you have to pay off the pirates in order to put a bounty on someone's head. Its cool in that it eventually leads to an eBay-like bidding war, with factions putting higher and higher prices on each other's head.

One problem with Sins, depending on your perspective, is the length of individual matches. It often takes five to six hours to play a game. The only way to win is to completely defeat another faction.

Graphically, the game looks great. The graphics aren't technically impressive, but the art design of the ships is amazing and distinctive. You also the incredible smooth Supreme Commander camera which allows you to zoom from an individual ship all the way out to a graphical representation of the entire "galaxy." Ship sounds are great, and the music is pretty decent.

For 4X affectionados, Sins is an amazing game and shouldn't be missed. Its incredibly deep and is an impressive first-showing for a new developer.

Gameplay: 9.5 - Amazingly deep 4X combat that works in real-time. Some matches might drag out for a bit too long, though.
Presentation: 9 - Great-looking ships and the interface is really easy to use.
Graphics: 9 - Decent technical graphics which scale to low-end systems, the game's units and factions look distinctly impressive.
Sound: 8.5 - Cool weapons and ship sounds, decent voice acting and music
Value: 9 - Matches take a while to resolve, but the mod potential for the game is incredible (Star Wars with hundreds of ships.)