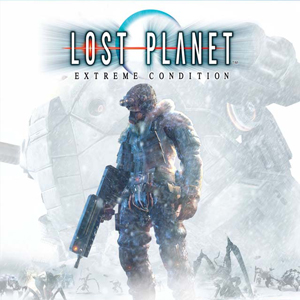 Lost Planet is a decent, arcadey action game from the legendary developers of the Resident Evil series...

Capcom has quite a history in the gaming market, especially with its zombie-horror game: Resident Evil. In recent years, Capcom has started to expand with new IPs such as Dead Rising and the new third-person shooter: Lost Planet. With its arcadey combat and unique environments, Lost Planet is a fun third-person shooter with an intriguing campaign.

In the future, humanity has started a search for new planets to colonize. One of the candidates is E.D.N. III, a frozen wasteland. Humanity landed there years ago only to find the Akrid, a race of insect-like aliens which lived and thrived off the thermal energy present in pockets around the planet. You play as Wayne, a soldier whose father is killed in the introduction by Green Eye, a giant Akrid. What follows is a tale of revenge, which quickly takes a turn as various human factions are introduced to the mix, making the whole plot bigger than just Wayne's personal hunt. Unfortunately, the story's presentation isn't impressive, with sparse dialog and radio transmissions during gameplay. The story is really advanced through abrupt cutscenes that interrupt gameplay and are kind of confusing.

The game plays mainly from a third-person perspective, along with some limited zoom and first-person gameplay. The majority of the gameplay takes place while shooting the Akrid. There's a huge variety of them, down from Starship Trooper/Antlion-types up to flying dragon-like monstrosities. They come at you from all angles, and are incredibly well-rendered. Whenever you're attacked by a huge one, your character is knocked down and forced to get back to his feet. While it sounds like a cool idea, it does get annoying when you are a victim to a large flurry of attacks that Wayne can't escape.

Wayne's health and ability to use special weapons is based on how much thermal energy, or T-Gen, he's collected. You can find it either in puddles scattered throughout all of the game and even inside dead Akrid. The catch is that your energy falls constantly, depending on the temperature of the environment. When you are hit, the T-Gen is drawn on to regenerate your health. Combat is actually quite easy, with weak spots on each insect. The only encounters that might give you some challenge are the boss battles, which are often pretty entertaining in terms of scale and action. Akrids aren't the only enemies, but the humans you fight through the game are decidedly less interesting/varied.

Another huge part of the game takes place in targeting mech-like vital suits. Piloting a VS is easy, and there are a few different types. Some of them can jump, others can dig through environments. In general, there's a great selection of weapons, which both Wayne and a VS can pick up.

Lost Planet is pretty short, taking up to 12 hours. The multiplayer has standard deathmatch, team deathmatch, post-grab (Battlefield-like gameplay) and fugitive mode, pitting everyone against a single defender. The maps are pretty large and detailed. Again, as most new games, the multiplayer doesn't really do anything new to distinguish itself from others.

In terms of graphical design, Lost Planet is beautiful. Everything is strong, from textures, to character models and environments. The console version's look great, but the PC version with DX10 effects enabled is simply amazing, with even better motion blur and "fur rendering."

Lost Planet is a fun, great-looking arcade romp through a short, intriguing campaign. While not measuring up to the complexity and quality of the Resident Evil games, its worth-looking at for action gamers.

Gameplay: 8.5 - A tight third person camera and great gun variety. Somewhat easy with the large amount of thermal energy used for health regeneration and easy-to-kill enemies.
Presentation: 8.5 - A fanatastic-looking world and enemy animations are hurt by the fragmented and confusing story sequences which do nearly nothing to alter the gameplay.
Graphics: 9.5 - Amazing use of motion blur and animation, especially when applied to the Akrids.
Sound: 8.5 - Great weapons sounds and Akryd noises. Disappointing voice acting.
Value: 8 - Entertaining, but short single player campaign. Multiplayer offers nothing new.