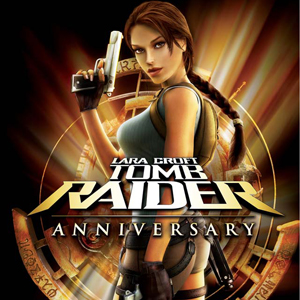 Anniversary is a faithful and successful recreation of the original platformer...

Tomb Raider is one of the game franchises whose roots stretch back into the early ages of the gaming industry. Its amazing world environments and intriguing puzzle gameplay. While the series has experienced both ups and downs, Crystal D has taken the series back to its roots with the successful Tomb Raider Legend. Their next game, Anniversary, harkens back to the story of the original game and brings it up to par with other recent games...

Just like the original game, Tomb Raider: Anniversary tells of Lara's hunt for the Scion of Atlantis. Again, the environments range from ruins and cities in Peru, Greece, Egypt. But, the game is not merely a texture upgrade of the original, environments are actually larger and more detailed, and puzzles have been improved. It makes the game feel very smooth and even bigger than the original.

Lara's picked up a few new abilities in the past few years, but the core of the movement remains the same. Just like Prince of Persia, you can shimmy across ledges, leap from one ledge to another, scramble from one ledge to a higher ledge, swing on veins and balance yourself. However, unlike POP, Lara has much more limited, human-like behaviors, meaning the challenges in this game are much more dangerous. If you miss your timing, there's a large chance you'll fall and either die or get hurt.

These abilities see an extremely high degree of use, as the environments conceal some extremely deep puzzles. Some puzzles require moving boxes and pushing switches. However, there are much deeper ones, such as getting across a broken bridge, which leads into yet another challenge, and so on and so forth. The puzzles are really intricate and reach a level of complexity and quality you really can't find in other current games. As in some other games, there are reflex sequences where you have to hit specific keys to time Lara's prerecorded moves just right to get through a specific scripted sequence. There's a nice new variety of gameplay mechanics that help keep the game fresh as you power through its 10 hour story.


There are several enemies in Anniversary, which usually take the form of various wildlife such as wolves, tigers, and even T-Rexes. The combat is a minor part of the game, just as in the other Tomb Raider games, and the gunplay features a simple lock-on system for your pistols and some dodging moves. There's a new adrenaline dodge, allowing you to dodge enemies in slow motion and take out an enemy in a single hit, but none of the combat is really meant to compete with heavy hitters like Gears of War.

The environments in Tomb Raider are all visually distinct and unique. Lara's animation and character model is top notch, with her acrobatic moves looking extremely authentic. There are little touches in the graphics, such as light reflecting through water, change in atmosphere between locales, which really make the game look distinct in this day and age.

Anniversary is a great-sounding game. There are plenty of ambient sounds such as animal calls and dripping water, and they all resonate differently depending on the size of the room. The music is sparse, but appropriate when used.

With Anniversary, Crystal D continues down the path of success in the Tomb Raider series. The newest game breathes life and improved gameplay mechanics into a franchise that revolutionized the platforming genre.

Gameplay: 9 - Lots of refinement to the original Tomb Raider formula, Crystal D has turned up the notch with even greater puzzles and better combat
Presentation: 9 - Highly immersive environments are supported by the fluidity of Lara's movements and the ambient sound effects of the surrounding fauna.
Graphics: 8.5 - Some great looking environments complimented by really small, but surprising details.
Sound: 9 - Awesome background effects that fit the locales that Lara travels to. The music is appropriately used to invigorate the player.
Value: 8.5 - While a great game, there's not much to do when you finish it. However, the time you spend with it is well worth it, especially compared to other, more average platformers released recently.

Final Score: 8.8 - Anniversary gets our recommendation for fans of the platformer genre and even old friends of Lara Croft.
Marcin Skok
Editor-in-Chief
"The Gaming Corner"