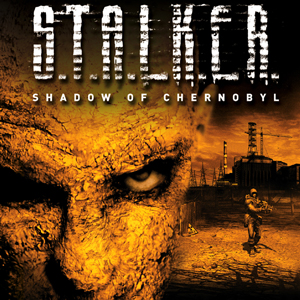 Years in the making, STALKER is the eeriest, most atmospheric, and best FPS/RPG hybrid released in nearly a decade...

Shooters have long experienced a certain lack of open-world gameplay and choice. Since Doom, FPS games have essentially been long walks down corridors with people trying to blast you away. Only several gems such as the Far Cry and Crysis series have really tried to mix up the genre with greater choice and larger environments, but even those games eventually boil down to outshooting a group of foes. Finally, GSC Game World decided to release STALKER, which promised FPS like gameplay mixed with RPG elements in a wide-open game world with brilliant AI. Announced in 2001, the game was delayed several years and finally released in 2007. Surprisingly, the game is among the best of the year and brings a lot of innovation to the genre...

Just as in most RPGs, you play as a Stalker with amnesia named the Marked One. You are found in the wreckage of a truck and discover that your mission PDA contains the mission to kill a stalker named Strelok deep in the Zone. The game takes place in massive levels representing the area in and around Chernobyl, in the year 2010.

At its heart, STALKER is primarily a shooter. It has some RPG elements in that you can go and do what you want in the context of the game world, but there are no things such as stats or power-ups. The game relies on your skill and picking up ammunition and supplies. Your character needs to constantly make sure that he has undamaged armor, good-condition weapons, and is even kept fed.

The game immediately throws you into large vistas and outdoor environments each of which could take a player several hours to traverse and explore. You'll soon start to notice how the radiation has affected the area, with different mutants running about and various anomalies subverting the environment. Some of these anomalies provide artifacts which confer different abilities. Some enhance your endurance and running speed, while others protect you from radiation, but also confer some problems, such as increasing your bleed-out rate.

The weapons in the game are fantastically rendered and varied. The weapons fire extremely realistically, lacking the arcade feel of most recent shooters. Bullets actually drop as distance increases, meaning you have to adjust your shots for this. Also, your weapons actually wear down as you use them, meaning you can't keep the same gun for the length of the game as they eventually start to jam more frequently. The fighting demands the use of cover and adaptive fighting. Combat AI is extremely impressive, with humans hunting you down and flanking around and into buildings. Animals attack you aggressively and are extremely frightening, especially during the night. When you pick up enemy's weapons and inventories, you discover that your character has a weight limit of how much he can carry. Surprisingly, this carries over into the game in that the more you carry, the more your movement speed is slown down. It really adds to the game's sense of depth.

Getting back to the AI, it is simply impressive. The zone actually feels alive, with different factions and animals all trying to go about their daily tasks. Characters range from lone stalkers out on their own to various factions that you can ally with or battle. There are also a wide variety of mutants, from the mutated animals to mutated humanoids to zombies and poltergeists, making an above-average variety of enemies, both for FPSs and RPGs.

S.T.A.L.K.E.R.'s main story is the length of an average shooter at 10 hours, but this does not include the plethora of side quests or simply exploring. The story itself might be simply hard to figure out because of the delivering of the game's story and dialogue through text. There are also multiple endings, but some are surely more satisfying than others.

The multiplayer component doesn't really measure up to the campaign. All you basically get is deathmatch, team deathmatch, and a capture the flag-like mode. While fast-paced, there isn't nothing cool here besides the Counter-Strike-like economy system. There are definitely much better multiplayer options out there.

For an engine that was conceived more than half a decade ago, the X-Ray engine in STALKER is instantly impressive. While not sporting the best textures, the combination of lighting and draw distance simply create an immersive atmosphere. The environments are mostly bleak, but everything is rugged and wild, with a sure sense of variety permeating the zones. Entire apartment blocks are rendered and even the interiors are enterable and detailed. The sense of exploration is marvelous, and it's the little details that make the difference.

Even more impressive is the audio in STALKER, which is simply phenomenal. The outdoor sounds are simply marvelous, with grass rustling and birds squawking overhead. When you enter a dark environment, the sheer eeriness of the planks creaking and mutants simply plodding around the corner really get the heart beating. Weapons sounds are incredible, and the crack of assault rifles in the distance lets you know that trouble's ahead. While the voice acting is a bit hard to understand, the game is set in a foreign country, and this gives another layer of authenticity to the game.

STALKER is a surprise hit, especially because of the game's unique and evolving world. Both RPG players and FPS players will appreciate the game, with the wide open environments and items, and extremely intense pulse-pounding combat. The atmosphere is perfectly expressed through the graphics and sound. This is the pinnacle of FPS/RPG hybrids.

(Note: This review evaluates the most-recently-patched version of the game, and most of the problems reported at release have since been fixed)

Gameplay: 10 - An amazing AI system immerses you in the environments and provides an authentic challenge in fire fights. Great use of RPG elements and authentic weapon handling.
Presentation: 10 - Captures the post-apocalyptic feel of Chernobyl perfectly. Simply the premiere aural experience.
Graphics: 9.5 - A great, even if dated, engine. Amazingly detailed and varied environments, weapons and objects are rendered well. Weather effects and changing time of day really add to the atmosphere.
Sound: 10 - Incredible environmental sounds and weapons
Value: 9.5 - The combination of all the quests and sheer size of the environments simply gives STALKER a campaign that you can't stop playing.

Final Score: 9.8 - Challenging the linearity of shooters in the market, STALKER is a crowning achievement for GSC that should be considered an important evolution in the hybrid FPS/RPG genre.
Marcin Skok
Editor-in-Chief
"The Gaming Corner"