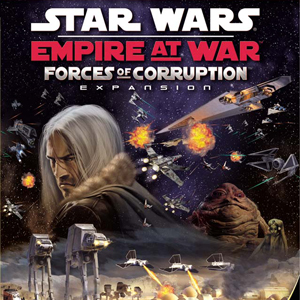 Petroglyph continues to excel with its Star Wars RTS series...

Strategy games based on the Star Wars universe had usually not been very great, with the franchise being most successful in the action-adventure and RPG front. Fortunately, Lucasarts decided to hand the reins to Petroglyph, a collection of veteran RTS designers who jump-started the Empire at War series, their best attempt at the RTS genre. Recently, they released the Forces of Corruption expansion pack. Is it worth getting for fans of the original?

Forces of Corruption explores a darker side of the Star Wars universe. Your whole role in the campaign is as the leader of a criminal organization, your name being Tyber Zann. You have a grudge against Jabba the Hutt, with no love for the Empire or Rebels. The opening mission has you busting out of Kessel's spice mines. Eventually, you build a criminal empire named the Consortium.

In a gameplay twist, the consortium doesn't seize planets but "corrupts" them, stealing cash from these planets. Within the campaign, there are corruption missions, involving space piracy or kidnapping, meaning you get to engage in a uniquely-built land or space battle. Once a planet is corrupted, you gain the ability to sabotage the planet's defenses, unlock new ships and technologies by purchasing them on a black market, and more. Also, you can easily bribe planetary defenses, meaning the consortium is capable of launching strikes deep into enemy territory.

The game manages to follow Star Wars lore, all while adding in new elements and storylines. Some familiar faces: such as Prince Xizor from Shadows of the Empire, and the popular Grand Admiral Thrawn; and unfamiliar faces: Silri, a Force witch, and Urai Fenn, a lethal alien sidekick, appear in the game.

The campaign is surprisingly more focused than the one in the first game. It takes place before and after the Battle of Endor. It takes you on a virtual tour of the galaxy, where you'll engage in various quest missions in orbit around planets and on their surfaces to uncover the secrets of the Emperor's vaults. The campaign is filled with intrigue and double-crossing which adds a lot of depth to the story. It is slightly short at under 10 hours, and ends abruptly, but overall, the campaign is quite decent for one included in an expansion.

The consortium really adds another dimension of gameplay against the Imperial and Rebel sides. It features some unique units such as destroyer droids, rancors, witches, and the ewok handler, which hilariously uses ewoks as suicide bombers. In space, the consortium fleet consists of some pretty powerful units. In fact, skirmish games against the consortium proved to be a lot tougher than anything we experienced in Empire at War. And then there's the awesome Super Star Destroyer and the Eclipse, a massive new type of Super Star Destroyer. There are some gameplay tweaks such as the ability to actually place your planetary bases so you can more easily defend the surfaces of your planets. You can also build bunkers and special transport vehicles to garrison infantry in, and in the case of the latter you essentially get a mobile bunker. The Rebel and Empire factions haven't been left out in the cold. Rebels get some nice units such as B-Wings and even the hero Yoda. The Empire gets extremely fast TIE Interceptors and powerful Dark Trooper ground units.

The production values in the expansion match those of  Empire at War. The ground and space battles are simply invigorating with the Star Wars theme blaring in the background.

Forces of Corruption manages to add to and improve on the Empire at War formula, mixing things up with the Consortium side and tight and gripping campaign. It's a great entry in the Empire at War series and is recommended for Star Wars and RTS fans.