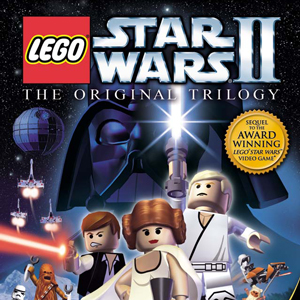 A charming and successful conversion of the original trilogy into a Lego world...

Lego Star Wars was a fun action adventure game that hilariously presented the shenanigans of the Star Wars universe exclusively with virtual Lego blocks. While strange, the game was considered to be one of the best Star Wars games in recent memory. Lego Star Wars II continues the series, bringing the original trilogy into its highly-effective Lego form.

You start out in Mos Eisley Cantina, which, like in the first game, serves as a hub from which you can access all the episodes, as well as a store counter where you can purchase extras and a new character creation area.

Lego Star Wars II is an action adventure game where you control a group of characters, solving puzzles and blasting your way through simple enemies. While you can only control one character at a time, you can switch characters easily on the fly to gain access to their abilities and events. There are several playable classes: Jedi, who sport lightsabers, and can use the force to push things; hero characters like Princess Leia and Han Solo who use blasters and special grappling hook points to reach areas other characters cannot; droids like C3PO and R2D2, who are able to open certain doors and activate certain equipment, and short characters like Jawas and Ewoks who can access special ducts that lead to hidden areas. Some doors can only be accessed by stormtroopers or bounty hunters, meaning you'll have to rely on special helmet machines which let your character slip past such defenses.  Since you'll never have either in your party when playing in story mode, you'll have to rely on special helmet machines, which will give your character the appearance of either a stormtrooper or a bounty hunter. After playing through a level, you gain the ability to play it in Free Play mode, allowing you to play the level with whichever characters you want, allowing you to find secrets and unlockables that you normally couldn't find on your first playthrough.

There are many vehicles in Lego Star Wars II such as landspeeders and AT-STs that you can pilot in the action adventure chapters. There are also dedicated vehicle sections that enable the player to carry out famous sequences from the movies which make the game feel more epic. The sole problem with these is a badly placed camera, which usually stays in a fixed position and interferes with easily moving through some of the levels.

Like the first one, the game offers a cooperative play option, allowing people to quickly jump in and out. Unfortunately, the game doesn't feature any online co-op option.

Lego Star Wars II is an easy game. Most of your shots are assisted by some generous autoaim, and "dying" only involves your character losing a bit of LEGO currency and then respawning. A first playthrough of the episodes should take about six hours, but there's plenty more content to uncover and unlock.

Combining toy blocks like Legos with a legendary series is no easy task, and gladly, Traveler's Tales has managed to do it extremely well. Added to this is the sound, where authentic sound effects and John Williams' music make the experience feel that much more authentic.

For players of the first game, Lego Star Wars II doesn't offer much new. But that's not a bad thing at all, considering that it brings in all three episodes of the original trilogy. Anyone nostalgic for some Star Wars action and who loves Legos will find this to be great, light-hearted game.

Gameplay: 9 - Same great mechanics as the original, adds in more dedicated vehicle sequences and the opportunity to create your own characters.
Presentation: 9 - Drawing on a vast library of source material, LEGO Star Wars II is simply filled to the brim with Star Wars goodness, all in a colorful Lego package.
Graphics: 8 - Awesome presentation of the Star Wars saga in a Lego context
Sound: 8.5 - Uses authentic sound effects and the Star Wars orchestral score to create the perfect, nostalgic experience
Value: 8 - While the initial game is short, drop-in co-op and unlockable characters and extras will keep you playing.

Final Score: 8.5 - This Star Wars adventure is one that no one, adults and children alike, should miss.
Marcin Skok
Editor-in-Chief
"The Gaming Corner"