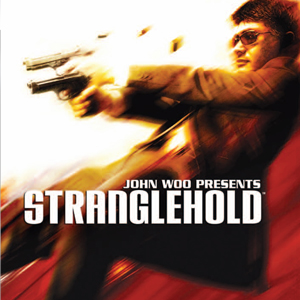 The only (decent) way to get your John Woo fix...

It's been a while since gamers have seen any John Woo-style action on their gaming platforms. Since Max Payne 2, this category has been left out in the cold. Ironically, Midway decided to create an actual game based off a John Woo universe. Based on Hard Boiled, John Woo's Stranglehold is a brief but entertaining sequel to the action-packed flick.

Taking place several years after the movie, you play as Inspector Tequila who decides to go out and battle gangsters who captured and killed a member of his police force. What follows is an oddly decent story of gangs double-crossing each other. But really, all the plot exists for is a set up to justify you fighting and killing whats probably every gangster in the civilized world.

The main gimmick of the game, "Tequila Time," is essentially the bullet-time mechanic from Max Payne with a few changes. The one trick is that you won't ever go into bullet-time automatically, unless you have an enemy in your targeting sights. The environments are highly interactive and destructible. For example, if you run up to a table, you can choose to slide right over it, or kick it over and use it as a temporary cover point. If you run up to a wall, you can dash up it and dive even further than usual. If there's a rail nearby, you can run up or slide down it. There are some weak environmental puzzles which involve shooting down planks to open up paths, but they are incorporated in a dumb way, probably being the weakest parts of the game. Another mechanic is "Tequila Time," which involves the player filling up a meter that enables the player to trigger a "Tequila Bomb," special abilities that range from regenerating health to an awesome sequence where time essentially freezes and Tequila essentially takes out everybody in the room.

Thankfully, the guns are satisfying to shoot for this type of game. Midway doesn't score any points for attempting realism, but tat is understandable given the outrageous context of the game. Each gun has its own strengths and weaknesses in power and accuracy and Tequila can carry only two types of guns at once. The PC version of Stranglehold has slightly better controls , with the aiming being quicker and more accurate with the mouse, easily offsetting the more difficult keyobard controls.

Stranglehold is a decently challenging game, and starts to get difficult at around the middle chapters. Abilities will be required and you'll have to move fast since enemies tend to destroy your cover as easily as you can theirs. Several of the boss fights are quite challenging, but there's nothing in the game which should frustrate a dedicated gamer.

The game can get repetitive at times. Even though shooting enemies and tearing up environments is initially fun, thats pretty much all you do in Stranglehold, and the game feels consequently dragged out.

The multiplayer mode feels very tacked-on. There's either deathmatch or team deathmatch with up to six players, and the maps feel very cramped for this type of gameplay. You can't go into slo-mo unless everybody has a full Tequila time meter. With limited play modes, inconsistent, cramped gameplay, and the fact that there seem to be very, very few people playing this game online, this isn't a multiplayer game to get excited about.

The most impressive aspect of the game's visuals is the environments and special effects. Much of every environment is detailed and destructible. Unfortunately, character models aren't well detailed, and animations look stiff. The game also has that generic Unreal Engine 3 vibe in its visuals which is really starting to drag down recent game releases.

The sound is decent: Dialogue is appropriately cheesy, and the weapons sound effects sound great. The soundtrack is a nice mix of typically bombastic orchestral pieces and some Asian-flavored string sections.

Stranglehold isn't a shooter revolution by any stretch. However, even though it does get repetitive, its the closest thing to Max Payne that John Woo affectionados have been able to experience in years.

Gameplay: 8 - Merely a Max Payne clone with some mixed-up gameplay elements, Stranglehold starts off fine but feels a bit dragged out by the end.
Presentation: 8 - Great destructible environments and "Tequila" gameplay elements along with a decent plot help move the game along.
Graphics: 7.5 - Nice environments, but character models and animations suffer from an obviously bad implementation of Unreal Engine 3.
Sound: 7.5 - Decent voice acting and somewhat impressive sound effects.
Value: 7 - A six-hour campaign does not mix well with a subpar multiplayer mode that no one plays.

Final Score: 7.6 - The closest thing to Max Payne that John Woo affectionados have been able to experience in years.
Marcin Skok
Editor-in-Chief
"The Gaming Corner"