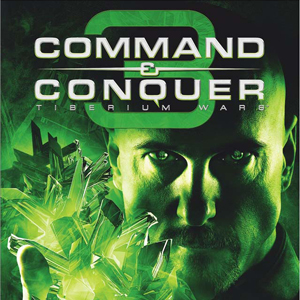 Tiberium Wars is a triumphant return to Command and Conquer's roots...

The Command and Conquer series was one of the premiere RTS franchises of the late 1990s. In recent years, however, it quickly dropped out of memory and fame with its past few releases: Generals. Abandoning much of what made C&C unique: such as Kane, Tiberium, and live FMV cutscenes; fans of the series feared that they would never see another Tiberium War again. Fortunately, in early 2006, EA announced its work on Command and Conquer 3: Tiberium Wars. And yes, surprisingly, it does what it came to do and brings the series back to its glory days.Command & Conquer 3: Tiberium Wars at the onset of yet another Tiberium War. While the conflict between the Global Defense Initiative and the Brotherhood of Nod appears to have subsided substantially ever since, Tiberium infestation has begun to reach critical levels and continues to destroy the Earth's ecosystems at an alarming rate, dividing the world into three vastly different geographical zones based on levels of infestation: Red (Zones that can no longer support life), Yellow (Contain majority of Earth's population, are populated by Brotherhood of Nod), and Blue (Last traces of civilization protected by the GDI). The Brotherhood of Nod fires a nuclear missile at GDI's orbiting command station:the Philadelphia, destroying the majority of GDI's government in one, well-planned assault. Nod then begins a full scale assault against Blue Zones all over the world, with you playing the role of a commander on either side. As the conflict unfolds however, alien forces known as the Scrin later enter the battle, and alter the nature of the Third Tiberium War entirely.

While the story is a notch above the rest, especially in the RTS space, the way it is presented is what truly stands out here. With live action FMV cutscenes featuring actors such as Billy Dee Williams, Michael Ironside, and Joseph D. Kucan as the legendary Kane, C&C 3 harkens back to its previous installments, interlacing mission briefings and news reports with some B movie cheese that make them surprisingly entertaining to watch after the massive outpour of stale, in-engine cutscenes found in nearly all games nowadays. The performances are all equally strong and entertaining, and half the fun in C&C 3 is merely watching them.

The other half of the fun, thankfully, resides in the gameplay. Again, EA took the "if its broke, don't fix it" approach, perserving what has made the C&C series fun and unique. Back are the: Tiberium substance as the game's sole and hazardous resource, the classic two factions of the C&C series; the GDI and Nod, and the "right-sidebar" user interface, and forward-base construction through "mobile construction vehicles", and "construction yard" buildings. Many units return in an upgraded form, including ones such as the Orca attack craft and Elephant heavy tanks. The gameplay focuses on constructing a base and acquiring resources to build up a player's war machine. All available structures of the faction chosen by the player are constructed on-site at "construction yards" - which typically begin as large-sized vehicles or aircraft capable of deploying themselves into the aforementioned construction yards or drone platforms - or alternatively at the supporting "crane" and "foundry" structures. When a construction yard, drone platform, crane or foundry has finished building a new structure, the player can select a spot near to a pre-existing structure in order to place it, where the building will then rapidly unfold. Additional units, structures and special abilities will become available as new structures are built. Base defenses can be built through the use of special defense towers, and they also become more powerful the further you go into a multiplayer match or campaign.

Command and Conquer 3's multiplayer, just like its predecessors, is extremely fun. It consists of the same gameplay elements found in the campaign and skirmishes. Matches are extremely fast, most taking an average of 5-10 minutes to reveal the winner. Its really a race against time, so that you can build up more and better units faster than your enemy. What results is usually a massive clash with both sides blasting away at each other until one breaches another's defenses and lays waste to their base. While this style of gameplay might seem archaic when compared to games like Company of Heroes and World in Conflict, C&C 3 is not a game that tries to innovate. It preserves the aspects of gameplay and presentation that make it a unique series.

Graphically, the game is quite good looking for an RTS, with the advantage that it can run on nearly 6 year old computers, an obvious advantage over other RTS titles released this year. Every unique is unique and all three factions are marked by distinctly different art styles. The sounds should also bring back memories of previous games and the voice acting is excellent.

Command and Conquer 3 is not a game that tries to turn the RTS genre upside down, as many other titles have this year. Instead, it brings us back to the good old days of Kane's nearly daily rebirths and constant use of cheesy, but unique live-action cutscenes. It harkens back to the series' glory days and should appeal to most RTS fans.

Presentation: 9.5 - Brings back the unique, live-action cutscenes. Retains the Command and Conquer feel with very diverse factions and great graphics.
Graphics: 9 - Good-looking by 2007 standards, it can actually run on your grandmother's PC...
Sound: 9 - The acting particularly stands out, with yet another stellar performance for Kane. Weapons and units sound distinct.
Gameplay: 9 - Not looking to innovate, it preserves the Command and Conquer gameplay mechanics with some new unit additions.
Value: 9 - With a challenging single player missions and a fast-paced multiplayer component, C&C 3 is yet another value-filled offering in a year packed with them.

Final Score: 9.1 - A blast from the past, Command and Conquer 3 brings back the glory days of the series and manages to stand on its own against other offerings like Supreme Commander, World in Conflict, and Company of Heroes.