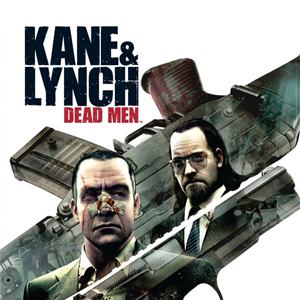 With the Hitman series, IO has made a mark in the world of gaming. With their latest project, Kane and Lynch, we are introduced to a whole new kind of game. But, can it achieve the fame and gameplay quality of the Hitman series, or is it another failure in the recent onslaught of overhyped gaming projects?

You begin playing as a character named Kane, a jailed criminal who is on track for execution. Soon, you're busted out by a fellow inmate named Kane and are threatened by the criminal group The7 to recover something they think you stole. Eventually, the game's narrative becomes a revenge tale, but one that doesn't particularly draw the player in due to the dislikable cast of characters.

Kane & Lynch is a third-person shooter. Unfortunately, weapons aren't very accurate and introduce a wide spread. The cover system can't compare to those found in Gears of War and Rainbow Six as the method of sticking to a wall is very unintuitive. Like in Gears, you can be revived by one of your teammates with an adrenaline shot. If you get that shot too frequently, you'll overdose and die.

Team members can be ordered around individually or as a team through orders similar to those found in Rainbow Six. Unfortunately, your teammates aren't exactly proficient at combat and will often be downed, meaning it would be best to play the game by sticking with your squad. This makes the actual squad aspect of Kane and Lynch subpar.

It is on the multiplayer front that Kane and Lynch attempts to innovate the most, but also eventually fails. The new mode is named Fragile Alliance and puts up to eight players in a team of criminals. Your objective is to steal money, cocaine, and jewels from various locations seen in the single-player game. The interesting thing is in the way the points are divided. Normally, the money is split evenly. But, a player has the option of betraying one of his teammates. So, this opens up the possibility of collecting more loot. This makes the multiplayer rounds a bit more tense than the average multiplayer match, not knowing if and when your teammate might suddenly turn on you.

The problem with the multiplayer is that draws on the campaign for its gameplay mechanics, so all of the firing issues and poor cover tactics are present here as well. There's no element of surprise, as you can see the names of enemies floating above them, even behind walls. There is a limited number of scenarios, and they play out the exact same way every single time. The guards are always in the same positions in the bank and the cops are always waiting for you right outside. The multiplayer is a general disappointment.

On all three platforms, the game looks nearly identical, with the obvious exception of the PC, which has a bit higher resolution textures and support for higher screen resolutions. In any case, the graphics are merely average for a late 2007-early 2008 game and only the character models for Kane and Lynch stand out as being impressive.

The soundtrack and design are probably the best parts of the game, with some tense music and good weapons effects. Voice acting is common and decent, but begins to get annoying with the constant cursing, especially the use of the F-bomb. Its a crutch that drags down the rest of the game quite a bit, with squadmates often using the same abusive phrase over and over. Things like that just make the game feel that much more annoying.

Kane & Lynch: Dead Men is an inherently-flawed take on the "crew-based heist tale" concept. Its extremely hard to recommend when you look at the extremely high number of extremely high-quality shooters released recently. The single player is short, and filled with annoying parts such as the mediocre squad and cover mechanics and annoying dialogue. The multiplayer is a smart idea that's worth seeing, but also inherits its share of flaws. All in all, Kane and Lynch is a game I must wholeheartedly recommend passing over.

Presentation: 7 - A somewhat interesting story, the game is marred by its annoying dialogue and problematic gameplay.
Graphics: 6.5 - Average looks for a next-gen game, low textures and stiff animations are rampant.
Sound: 7.5 - A great soundtrack and great gun sounds are unfortunately marred by the increasingly insulting dialogue.
Gameplay: 6.5 - Borrows squad and third person mechanics from Rainbow Six and Gears of War, respectively, but generally fails to replicate them in any decent way. The multiplayer, while interesting, is brought down by the same exact issues.
Value: 5 - A six hour campaign and a flawed, unpopular multiplayer mode make this game one of the worst values of the year.

Final Score: 6.5 - Don't buy Kane and Lynch, just try it out and/or rent it. It unfortunately can't compare to the majority of titles released this year.