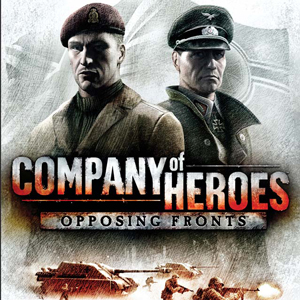 Stand-Alone or Expansion, Opposing Fronts is a quality WWII RTS, and will be loved by Company of Heroes fans...

It seems that the PC RTS scene just can't stop getting better. With quality RTSs being released every few months that challenge ancient gameplay mechanics with innovative additions and groundbreaking graphics. Delivering a knock-out punch with Company of Heroes, Relic wasn't content to rest on its laurels and recently released the Opposing Fronts follow-up.

Opposing Fronts introduces the British Army and the German Panzer Elite. Combined, the single player campaigns for each faction are actually longer than that in the original game.  These new factions are suprisingly varied when compared to the original and pen up some interesting playstyles. For example, the British are built around the idea of mobility and defenses, with mobile headquarters units that can relocate around the map. Their structures and buildings are also incredibly powerful, including slit trenches, howitzers, mortar pits,  and more. Meanwhile, the Panzer Elite is built around the idea of hard-hitting and fast-moving combat groups that can race around the battlefield, either to counter what the enemy is doing or to exploit an opening. The Panzer Elite is made up of extremely powerful units and doesn't so much lock down territory as it bulldozes its way across the map. The new factions are harder to control than the original ones, since they necessitate the constant movement of troops around the map. Opposing Fronts introduces new faction doctrines, like scorched-earth tactics for the Axis, letting you booby-trap and sabotage buildings and resource points to deny them enemy access.

Multiplayer is basically unchanged besides the addition of the two new comprehensive factions, which is not a bad thing. It is basically the same as Company of Heroes, and should satisfy those looking to get their fix online.

As always, presentation and production values are top-notch, with fully destructible environments and improved DirectX 10 effects. The audio is also excellent. Both campaigns have their own unique music, and the British campaign in particular is inspiring. Battlefield sounds are just as authentic as before, and units even call in context-specific descriptions of the situations that they're in over the radio.

While Relic could have simply cashed in on the Company of Heroes franchise with an average expansion pack, they simply didn't want to stagnate their winning series. As a stand-alone game which can be combined with the original, Opposing Fronts adds varied sides and new graphical effects. The amount of improvements and additions found in this expansion rival that of actual sequels. If you're a WWII and/or RTS buff, pick this and the original up from Retail or on Steam. It's just that good.

Presentation: 10 - Again, presentation is what makes the Company of Heroes series stand out, with its amazing environments and cinematic cutscenes and sound effects
Graphics: 9.5 - The Essence Engine has gotten some tweaks which lets Opposing Fronts continue to lead the charge in RTS graphics.
Sound: 10 - Same amazing sound effects as the original, the unit status updates have been upgraded to more accurately inform you of a specific unit's situation.
Gameplay: 9.5 - The British and Panzer Elite add a lot of variety to CoH's amazingly dynamic battlefields, encouraging constant movement around the map to get the better of opponents.
Value: 9.5 - While it can stand alone, I strongly recommend for you to combine this with the original, guaranteeing a long-lasting RTS package with four distinct sides, excellent multiplayer, and three cinematic campaigns.