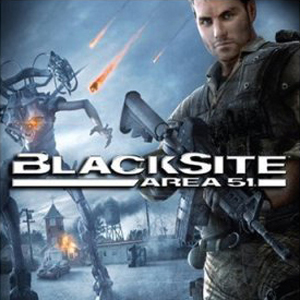 Blacksite: Area 51 is a game that should have STAYED classified...

The Area 51 series of games has not historically had much luck with its recent console and PC outings. The original, Area 51, was criticized for its weak voice acting, derivative gameplay, and problematic multiplayer. Midway has sought to revive the series with its newest installment, Blacksite: Area 51. But does Blacksite succeed where Area 51 failed, or does it follow in the footsteps of its predecessor as an ordinary, linear, problematic shooter?

One of the first things you'll notice about the game is that it actually has a fairly competent story. Starting it off in Iraq, and leading you to (where else?) Nevada, you are exposed to a tail of military discipline, horrible discoveries, failed scientific experiments, and disturbing political commentary. If nothing else, the game makes you think for a minute about the lengths certain government and other factions could go in order to further their own power.

Unfortunately, when you get to the actual game, Blacksite begins to fall apart. The gameplay is basic, BASIC, FPS fare. You get to carry two guns, one type of grenade, and thats it. There's no dual-wielding, sprinting, or any other staple of quality next-generation shooters. Your missions are often carried out along with the help of a squad, but all that they're useful for is laying down a bit of covering fire and opening doors, some of which your own character is mysteriously not able to open. Once or twice, there are simplistic vehicle sequences which basically have you driving down a road while your squadmate in the turret fends off aliens. You literally get 5 or 6 different weapons throughout the entire campaign, and they are completely boring and derivative. The most interesting one is a blatant rip-off of the Unreal Tournament Flak gun.

The enemies in Blacksite are strange-looking, and have a decent variety. Many of them actually look like aliens, avoiding the bipedal stereotype which you find in so many other games. However, they are mostly not very interesting to fight. Most of them rush you and try to club you to death, forcing you to retreat and fire continually. There are several huge enemies, but the way to get rid of them isn't very original, shooting at glowing spots found all over their bodies (such as in Lost Planet). From time to time, you do fight actual humans, but the AI powering them is so bad, that you'll find yourself taking out entire groups of them with grenades as they stand out in the open and let you pick them off.

Level design is completely linear, not offering any branching paths and only one way to get to the next area. Your objectives are constantly carried out by your squadmates. For example, in one mission, you're told to plant C4 on a bridge. What you have to do is order the guy who told you to plant the C4. Your character isn't even given the ability to attempt it. These moments are also often filled with frantic defense sequences where you fight constantly spawning enemies until a certain objective is completed. It is a game mechanic that's been used to death, and its not even that well-implemented here. The campaign is also literally six hours long on the highest difficulty, being dwarfed even by expansion packs to other games.

Multiplayer is a disaster, offering only standard shooter gametypes mixed with Blacksite's uninteresting weapons and game mechanics. Also, you'll be hard-pressed to find a populated session on either the PC or the 360 version.

Blacksite uses Unreal Engine 3 (like so many other games these days), and so you would at least expect it to look good. Unfortunately, Midway just didn't seem to implement the engine well when they designed the game. Environments are very bland, character modeling and animation are very artificial-looking, and the game mostly looks unappealing. There are a few decent-looking vistas, examples of which can be seen in our screenshot gallery, but they are extremely few and far between. The only decent thing about the game's looks is the implemented motion blur, which also feels too excessive at times. There is excessive pop-in, and enemies just spawn out of nowhere at a few instances. The game runs inconsistently, running at 60 FPS at one moment, to becoming a slideshow the next.

Weapon sounds and music are underwhelming. Voice acting is just terrible, making you wish that your squadmates die just a little bit faster so that you can be rid of their annoying voices and mannerisms.

Across all three platforms, Blacksite is close to identical. The PC version is the best-looking of the bunch, but it really feels like a badly handled port. There are barely any options for customizing the game, and the in-game menu consists of a Resume and an Exit button. The console versions have an even greater rate of pop-in and some technical problems on the multiplayer side. Midway really dropped the ball on taking advantage of each platform's strengths.

Blacksite is an unfortunately flawed game. The story behind it shows promise, but the developers really messed up on the gameplay and technical side of the game. It's barely worth a rental, and only then if you're really, really interested in alien shooters and are willing to put up with a range of problems.

Gameplay: 6 – The levels are linear. The guns are few and far-between. The enemies are mostly boring and derivative. Multiplayer is dead before it even got off the ground. A real mess.
Presentation: 6 – Blacksite shows some vestiges of a good idea in the form of its story. However, voice acting and overall presentation will have the player shaking his head throughout.
Graphics: 6.5 – Unreal Engine 3 is brutally under-utilized here, showing off some last-generation texture work and sickness-inducing motion blur. Some of the aliens do look interesting, however.
Sound: 4.5 – The weapon sounds suck and the music is barely existent. The voice acting will have you reaching for the mute button.
Value: 5 – The campaign is six hours long on its most challenging difficulty, and multiplayer is uninteresting and under-populated.

Final Score: 5.7 - Blacksite is as bad, if not worse then, its mediocre predecessor. The good ideas are totally overshadowed by its problems, both gameplay and technical.