Lecture and Book Promotion of "Courage and Fear. Non-Heroic Narratives of Occupied Lwów" in New York 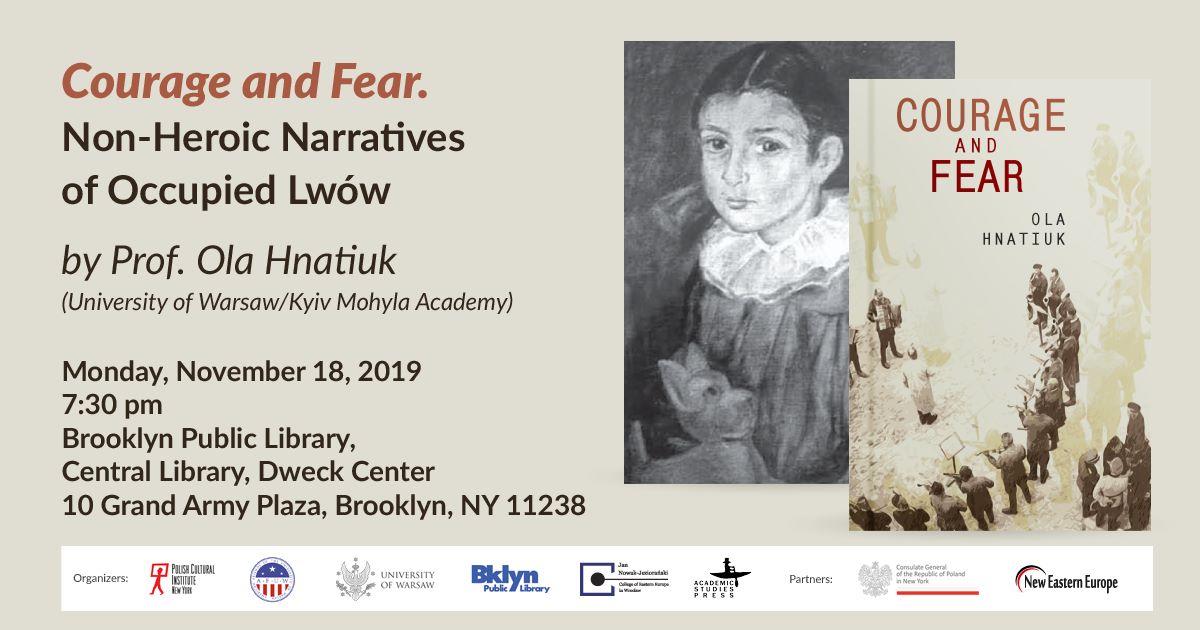 Please join us for the lecture and book promotion by prof. Ola Hnatiuk at the Brooklyn Public Library in New York

Courage and Fear is a study of a multicultural city in times when all norms collapse. Ola Hnatiuk presents a meticulously documented portrait of Lviv’s ethnically diverse intelligentsia during World War Two. As the Soviet, Nazi, and once again Soviet occupations tear the city’s social fabric apart, groups of Polish, Ukrainian and Jewish doctors, academics and artists try to survive, struggling to manage complex relationships and to uphold their ethos. As their pre-war lives are violently upended, courage and fear shape their actions. Ola Hnatiuk employs diverse sources in several languages to tell the story of Lviv from a multi-ethnic perspective and to challenge the national narratives dominant in Central and Eastern Europe.

The outcome is an image of Lwów that is, frankly, unsurpassed in its intellectual and emotional richness, in Polish or for that matter in any other language that I know.
Timothy Snyder

Thoughtful, insightful, exceptionally well researched and moving at the same time, Courage and Fear is the book that plunges the reader into the depth of the history in one of the most contested places on the European map.
Serhii Plokhy

Ola Hnatiuk is a professor at the University of Warsaw and at the Kyiv-Mohyla Academy. She also served in the Polish diplomatic corps (2006–2010). She is the recipient of numerous awards, including Polonia Restituta (Republic of Poland highest state award), the Antonovych Foundation Award for fostering Polish-Ukrainian cultural cooperation, and the Pruszynski Polish PEN-Club Award. Her book Courage and Fear (originally published in 2015) received awards in Ukraine and in Poland.

The event is the New York launch of prof. Ola Hnatiuk’s book Courage and Fear published by the Academic Studies Press of Boston in cooperation with the Harvard Ukrainian Research Institute and the Jan Nowak-Jezioranski College of Eastern Europe. Book signing will follow the lecture.

The English edition of Courage and Fear has been made possible by the generous grant of the Ministry of Science and Higher Education of the Republic of Poland.

The event is free and open to the public.
RSVP by November 15 at nyc.office@instytutpolski.org

A Night of Philosophy and Ideas at the Brooklyn Public Library The President of Poland: The Truth that Must not Die New York Build Expo at the Javits Center, NYC Get Married for Free at Terrace On The Park in New York Speech by President Duda. “CEEplus index: Opportunities and benefits for the CEE and investors”
read more