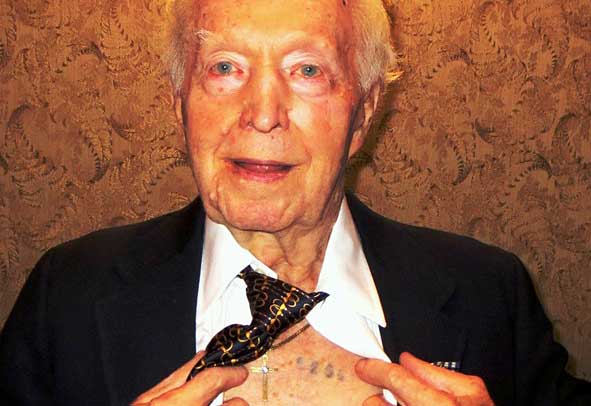 Hitler’s SS Guards changed the name of Walter Kolodziejek (above) after he was arrested and sent to Auschwitz in the summer of 1940, just a few weeks after the Germans opened it. He was only 18 then. The day he arrived he came to be known as Auschwitz prisoner #2254 and has worn that number on his chest ever since. It was only the first Polish prisoners like Mr. Kolodziejek who had their number put on their chest. Almost all of these early Polish prisoners who survived the camp have already died and Mr. Kolodziejek is believed to be the only one still living with this kind of tattoo. Photo by Polish American Congress

BROOKLYN, NY…With the passing of 2016 and our hopes in a new year, I reflect on my father’s 95th birthday on January 28, 2017, the passage of time, humanity, and his legacy as a Polish Catholic Holocaust survivor. It is nothing short of extraordinarily good fortune and his deep faith in God that spared my father’s life during 5 years of unthinkable Nazi brutality.

Waclaw Kolodziejek was arrested in August 1940 in Warsaw as a teenager.  His crime:  being Polish.  And he was Catholic.  It took many days in a crowded standing room only cattle car train before he was unloaded in Auschwitz concentration camp.  He found himself in the company of hundreds of thousands of other Catholic Poles just like him.  Auschwitz was not yet completed, so my father was forced to finish this Nazi order.

Many of these Polish Christian prisoners not killed in the gas chambers or individual executions, died of starvation, forced labor, and medical experiments.  My father suffered forced labor, starvation, medical experimentation, and torture.  Throughout he refused to succumb to death.  His unbreakable endurance was remarkable, and the Nazis nicknamed him “hard as stone”.

He was condemned to death and tattooed on his chest with “2254”.  In June 2009 Auschwitz-Birkenau State Museum's Director of Research explained this Nazi branding:

"The difficulties in identifying the corpses increased... tattooing was done with a special metal stamp, holding interchangeable numbers made up of needles approximately one centimeter long. This device allowed the whole serial number to be punched at one blow onto the prisoner's left upper chest.  Ink was then rubbed into the bleeding wound. The POWs being tattooed were so weak that they had to lean against the wall in order not to fall over under the impact of the tattooing punch.  Other exhausted prisoners, whose physical condition indicated the likelihood of their imminent death, began to be tattooed... There is only a handful of Polish survivors with numbers tattooed on their chests!!!  The use of the metal tattooing stamp proved to be impractical.  A single-needle device was introduced, which pierced the outlines of the serial-number digits.  The site of the tattoo was later changed to the left forearm."

The Auschwitz-Birkenau State Museum believes that my father may be the last remaining Holocaust survivor from one of the first transports into Auschwitz with a number on his chest.  My father has always worn this “2254” tattoo as a badge of Nazi defiance that encapsulates his determination to live despite all odds, a symbol of his witness and testimony to 5 years of Nazi atrocity upon humanity.

Some Holocaust survivors could not or would not discuss their experiences of terror committed by the Nazis.  But my family lived my father’s near-death horrors each and every day.  My sister and I grew up listening to his recollections daily.  He lived his life never forgetting what the Nazis did and he never let his children forget.

For a good portion of his 72 years as a Holocaust survivor since the concentration camps were liberated in 1945 he has suffered an indignity that still prevails.  The subject of the Holocaust as it pertains to Christian Poles continues to be met with ignorance and outright distortions to its history.

It is no secret that Hitler’s Generalplan Ost (General Plan East) was a plan to colonize Central and Eastern Europe, implemented by genocide and ethnic cleansing, and that Nazis viewed Slavic People as inferior.  It is no secret that Poland’s territories have always been geographically and strategically valuable, and historically fought over.  It is no secret that on August 22, 1939 Hitler ordered his commanders to: “kill without pity or mercy, all men, women, and children of Polish descent or language.”

On this 95th birthday I wish to celebrate my father’s life, defined as a Holocaust survivor, and wish him a Happy Birthday.  We celebrate his life in defiance of Heinrich Himmler’s dark intent:

"All Poles will disappear from the world.... It is essential that the great German people should consider it their major task to destroy all Poles."

As we begin a new year in 2017 I wish our world peace that includes acknowledgment, inclusion, and deep respect for our Polish Christian Holocaust survivors that is so deserved and overdue.  My hope is for a balanced reference of the Holocaust that correctly tells its history for future generations to learn from.  It is a responsibility that benefits humanity and the legacy of all who suffered the Holocaust.

"War Journal" of SS Officer and Locations of Lost Treasures of World Cultural Heritage
Queen Elisabeth and Prince Philip - 74 Years of Extraordinary Love
76th Anniversary of the Liberation of Auschwitz. Commemoration Broadcast Jan 27, 2021, 10am EST
Szczepan Mierzwa, the Father of the Kosciuszko Foundation
The Polish-Soviet War of 1919-1920 in Western Geopolitics: A Webinar with Piotr Puchalski PhD
Happy Birthday to Tadeusz Kościuszko. The Greatest Polish-American Hero!
Live: "Poland First To Fight" History Conference at the National Press Club, Washington, DC
A Statement on the Smithsonian Documentary about Pulaski’s Skeleton as Female or "Intersex" (hermaphrodite)
Nazi Invasion in 1939 Began WWII and "Big Lies" Against Poland
SEE MORE