The Polish-Soviet War of 1919-1920 in Western Geopolitics: A Webinar with Piotr Puchalski PhD 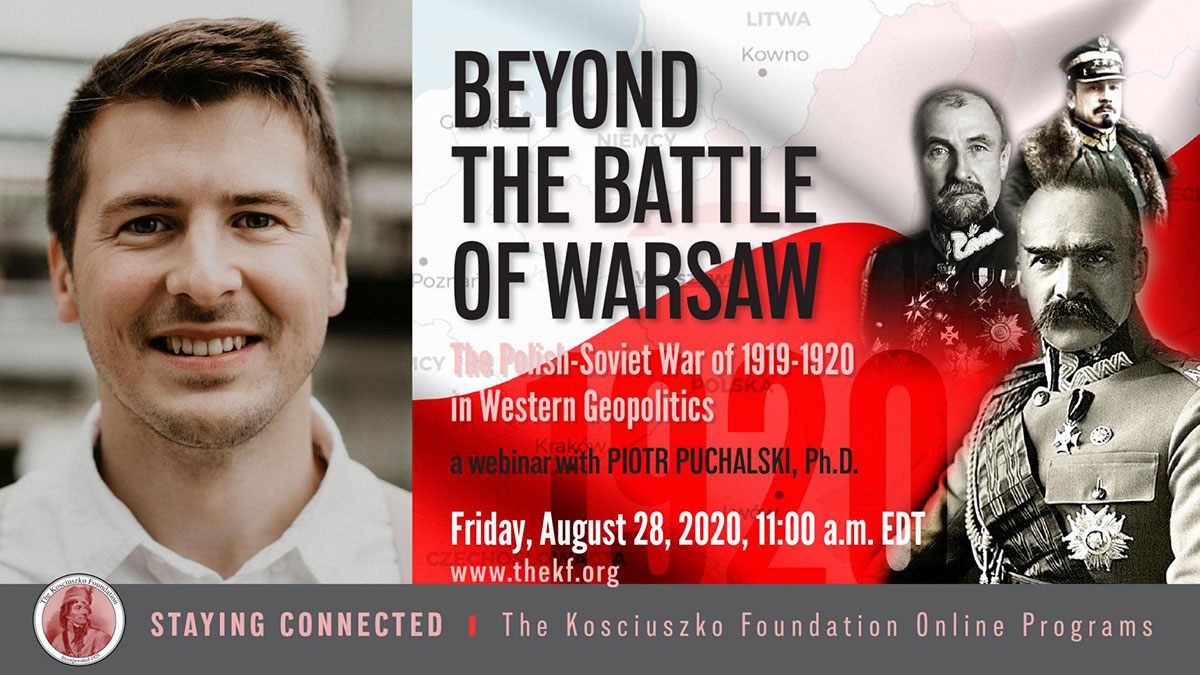 The Battle of Warsaw (August 12-25, 1920), also known as the Miracle of the Vistula, was a series of battles that resulted in a decisive Polish victory during the Polish-Soviet War. Poland, on the verge of total defeat, repulsed and defeated the Red Army, and Polish victory over the Soviets halted the spread of communism further westwards into Europe.

Vladimir Lenin, the Bolshevik leader called it "an enormous defeat" for his forces, and British politician, diplomat, and author Edgar Vincent D'Abernon included this battle on his expanded list of most decisive battles in the world's history.

To mark the centennial of this momentous event in Poland's history, we invite you for a webinar with a specialist in diplomatic and political history in the interwar period, Piotr Puchalski, Ph.D. who will examine the role played by the Polish-Soviet War in determining Western geopolitical aims.

Piotr Puchalski holds a Ph.D. from the University of Wisconsin-Madison and is an Assistant Professor of modern European history at the Pedagogical University in Kraków. He specializes in diplomatic and political history of the interwar period. In his upcoming book, he analyzes the role played by colonial aspirations in the formation and development of the interwar Polish state.

Happy Birthday To Tadeusz Kościuszko - Our Greatest Hero!
A World that Slowly Fades… The Last Baroness Born on Castle Książ Died at the Age of 92
Royal Military Exclusive Collection Inspired by the "Bicentenary of Napoleon Bonaparte" was presented at the Chateau d’Ermenonville, France at the Grand Ball
"War Journal" of SS Officer and Locations of Lost Treasures of World Cultural Heritage
Queen Elisabeth and Prince Philip - 74 Years of Extraordinary Love
76th Anniversary of the Liberation of Auschwitz. Commemoration Broadcast Jan 27, 2021, 10am EST
Szczepan Mierzwa, the Father of the Kosciuszko Foundation
Happy Birthday to Tadeusz Kościuszko. The Greatest Polish-American Hero!
Live: "Poland First To Fight" History Conference at the National Press Club, Washington, DC
SEE MORE