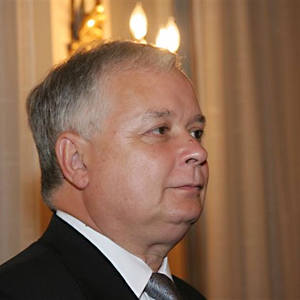 President Kaczynski of Poland defended Pope Benedict XVI in an interview with The New York Sun, saying the Islamic world was "a little too easily offended" at the pontiff's comments. Mr. Kaczynski said a serious dialogue with the Islamic world should take place but that "there have to be principles of sensitivity that are equal for all sides."

President Kaczynski of Poland defended Pope Benedict XVI in an interview with The New York Sun, saying the Islamic world was "a little too easily offended" at the pontiff's comments. Mr. Kaczynski said a serious dialogue with the Islamic world should take place but that "there have to be principles of sensitivity that are equal for all sides."

The reaction among Muslims to the pope's use of a medieval quotation referring to Islam as a violent religion has caused a worldwide uproar. Recent attacks on Catholic churches in the West Bank and the fatal shooting of an Italian nun in Somalia are widely believed to be related.

Mr. Kaczynski said that, while he does not want to offend Muslims and does not believe in religious wars, "I am a little disturbed by this reaction. Where is the line that a Christian or Catholic cannot cross and say what they think?" The Polish president was in New York to address the opening session of the United Nations where he said Poland's own experiences with totalitarianism and foreign occupation caused many Polish citizens to view the world through a prism of solidarity with those who struggle for human rights and freedom and strive for material prosperity and spiritual growth.

Poland has recently begun playing a larger role in peacekeeping missions around the world, announcing last week that it would send 1,000 troops to Afghanistan and 500 troops to Lebanon.

Mr. Kaczynski, who visited Israel last week, said his country's support of the state of Israel and its security is "unwavering" but that he also supports the independence of the Palestinian Arabs. He added, "We must fight terrorism everywhere that it exists in the world, but we must also deal with poverty and inequality, which are the roots of terrorism."

The Polish leader said he was "surprised" when President Chirac of France said he opposed sanctions against Iran as a way to pressure the Islamic nation to end its nuclear weapons program, which it maintains is only for energy purposes. Unless France can offer a better approach, Mr. Kaczynski said, he stands with other world leaders who are suspicious of Iran's motives and support sanctions as the solution.

Nonetheless, Mr. Kaczynski said he would like the other E.U. countries to be more active in peacekeeping operations and to expand NATO membership to more Eastern European states like Ukraine, Georgia, Macedonia, and Croatia because he views the alliance as "an exporter of peace and stability."

Mr. Kaczynski laughed when he said: "Just because we were able to jump on this tram [NATO], we can't close the door and keep these other countries from getting on."

This support for a more active and larger NATO puts the Kaczynski administration in a delicate position as it tries to balance Poland's interests as a member of the E.U. and an America ally. Washington has been negotiating with Warsaw to station a missile defense system on Polish territory that could shoot down any rockets that were fired at American or NATO countries.

The Polish government is open to the idea but insists that its own security issues must also be dealt with as part of any agreement on the missile shield. In the Sun interview, Mr. Kaczynski said: "If Americans want to put a system in Poland that heightens tensions with our neighbors, then this has to be addressed. Whether we like it or not, Russia is important to us. They occupied our country for 120 years."

Mr. Kaczynski added that, while Poland is very appreciative of American support for the movement that ultimately brought an end to the Cold War, his administration must do all it can to provide for the security of his own nation.